Eleonora Rosati Wednesday, August 01, 2018 - Eleonora Rosati, global piracy study, IViR, Joao Quintais, Joost Poort, piracy
The percentage of internet users in Europe that occasionally download or stream content illegally has decreased between 2014 and 2017. The decrease occurs for music, films/series and books. For games, the pattern is mixed. Meanwhile, expenditure on legal content has increased in most countries. This follows from the Global Online Piracy Study conducted by the Institute for Information Law (IViR) together with Ecorys.

The IPKat is curious to hear more about this interesting work, and has asked the authors, Joost Poort and João Quintais, to provid readers with some details.

Here’s what Joost and João say:

The research team conducted consumer surveys among nearly 35,000 respondents, including over 7,000 minors, in 13 countries: France, Germany, the Netherlands, Poland, Spain, Sweden, Brazil, Canada, Hong Kong, Indonesia, Japan, and Thailand. The survey deals with the acquisition and consumption of music, films, series, books and games through legal and illegal channels. Illegal channels studied are downloading and streaming from illegal sources (including via dedicated technical devices), and streamripping. Comparative legal research was performed on the basis of questionnaires on the legal status of online copyright infringement and enforcement, completed by legal experts in the 13 countries.

The study was financed by Google and builds on previous studies by IViR and Ecorys for the Dutch Government and the European Commission. In the latter, a comparable survey was used in six European countries, as a result of which time trends for these countries can be studied and there is the unique opportunity to follow respondents over time.

Despite some legal uncertainty, the majority of acts studied are qualified as direct copyright infringement by users or give rise to liability for intermediaries. Moreover, ISPs are often subject to injunctions and duties of care even when they benefit from safe harbours. On the whole, copyright holders have a vast arsenal of legal enforcement measures to deploy against end users and ISPs. There is a trend in many countries toward copyright enforcement through civil or administrative measures aimed at blocking websites that provide access to infringing content. Notices to infringers and to platforms hosting or linking to infringing content with the aim of removing/blocking such content are likewise regularly used, the latter in the context of notice-and-takedown systems. Criminal measures are less popular.

Still, despite the abundance of enforcement measures, their perceived effectiveness is uncertain. Therefore, it is questionable whether the answer to successfully tackling online copyright infringement lies in additional rights or enforcement measures, especially if these will not lead to additional revenue for copyright holders and risk coming into conflict with fundamental rights of users and intermediaries. Instead, it might be sensible to search for the answer to piracy in the provision of affordable and convenient legal access to copyright-protected content.

Sales data reveal that across all content types and formats, per capita income is an important driver of expenditures. However, above an annual income level of € 30,000 per capita, this relationship no longer seems to apply and national and cultural preferences dominate income effects. Despite a decline in physical sales, the increase in digital sales led to net growth for total recorded music, audio-visual content, books and games between 2014 and 2017 in the majority of countries. Expenditures on live concerts and cinema visits are also growing.

Online piracy is most prevalent in the internet populations of Indonesia, Thailand and Brazil, followed by Spain and Poland. 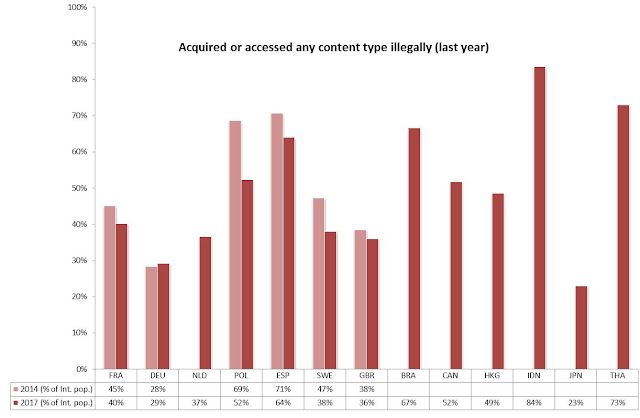 As a percentage of total population, Spain, Canada and Hong Kong are the top three countries for piracy. Between 2014 and 2017, the number of pirates decreased in all European countries except Germany.

It might be tempting to argue that an increase in the use of certain enforcement measures against obviously illegal platforms has contributed to the decreasing number of pirates in Europe. However, a lack of evidence concerning the effectiveness of most enforcement measures and the strong link between piracy and the availability and affordability of content suggests otherwise: at a country level, online piracy correlates remarkably strongly with a lack of purchasing power. Higher per capita income coincides with a lower number of pirates per legal users. 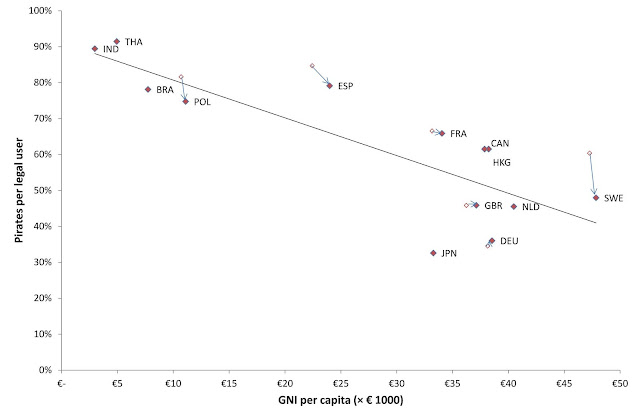 Moreover, pirates are also legal users: demographically, pirates resemble legal users quite closely, although on average they tend to be somewhat younger and more often male. More importantly, for each content type and country, 95% or more of pirates also consume content legally and their median legal consumption is typically twice that of non-pirating legal users.

This study confirms earlier studies in finding statistical evidence that illegal consumption of music, books and games displaces legal consumption. For live concerts and music festivals, however, a positive effect is found. Separating these results between minors and adults suggests that displacement occurs for adults and not for minors.

Using time-structured data for blockbuster films, an average displacement rate was found of –0.46 of first legal views by first illegal views. The largest effect occurs on cinema visits. From these estimations, it is possible to calculate an upper bound for the relative sales loss of total film views per channel and per country. Overall, a maximum of about 4.1% of all legal blockbuster views is displaced by illegal views.

Longitudinal analysis of individual changes in consumption for respondents in six EU countries between 2014 and 2017 reveals positive correlations. Apparently, substitution effects – ‘Shall I buy or shall I pirate?’ – occur on the spot. Over a longer time span, improvements in the availability from legal channels are dominant and changes in personal preferences affect legal and illegal consumption alike."
'Piracy down, legal sales up' says new IViR study

Reviewed by Eleonora Rosati on Wednesday, August 01, 2018 Rating: 5
The IPKat licenses the use of its blog posts under a Creative Commons Attribution-Non Commercial Licence.