The truth about yesterday's Budcases - now it can be told 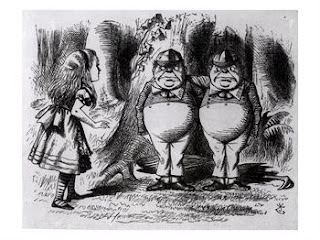 PRESS RELEASE No° 40/07, which the IPKat found on the Curia website, gives the low-down on all those Budcases from the Court of First Instance yesterday (see post here). This document provides a helpful if non-binding summary of all these decisions for the diligent non-reader.

Right: an allegory for our time. Alice (left) represents the Courts; Tweedledum and Tweedledee the two Budweisers

"Between 1996 and 1998, ... Anheuser-Busch applied to ... OHIM for registration of the word marks ‘BUDWEISER’ and ‘BUD’ and a figurative sign containing the term ‘BUDWEISER’ as Community trade marks, for various products including stationery, articles for cleaning purposes, clothing, pastry and confectionery [note that this list excludes beer]. The trade mark application for the figurative sign containing the term ‘BUDWEISER’ also covered the following goods in Class 32: ‘beer, ale, porter, malted alcoholic and non-alcoholic beverages’ [see, further, what it says in the final paragraph of the press release] .

The Czech company Budějovický Budvar brought opposition proceedings against Community trade mark registration in respect of all of the goods sought. In support of its oppositions, Budějovický Budvar relied, inter alia, on earlier appellations of origin,3 registered for ‘beer’ under the Lisbon Agreement, and an international word mark BUDWEISER, registered for ‘beer of any kind’ [the full list of appellations of origin is BUDWEISER BIER, BUDWEISER BIER – BUDVAR, BUDWEISER BUDVAR and BUD].

OHIM rejected the oppositions brought by Budějovický Budvar on the basis of the appellations of origin in question in respect of the Community trade mark applications for goods other than beer. Budĕjovický Budvar brought actions against the decisions rejecting those oppositions before the Court of First Instance of the European Communities.

OHIM did, however, accept the opposition brought by Budějovický Budvar on the basis of the international word mark BUDWEISER against registration of the figurative sign containing the term BUDWEISER in respect of ‘beer, ale, porter, malted alcoholic and non-alcoholic beverages’. Anheuser-Busch brought an action before the Court of First Instance against that decision (Case T-71/04).

In its judgment today, the Court finds that the appellations of origin relied on by Budějovický Budvar are protected under the Lisbon Agreement only for beer and similar products. The Court notes, however, that French law allows for more extensive protection when the goods in question are dissimilar. In order to benefit from the more extensive protection, Budějovický Budvar should have proven that Anheuser-Busch’s use of the disputed signs is likely to misappropriate or weaken the reputation in France of the appellations of origin in question. The Court concludes that Budějovický Budvar has not succeeded in proving the existence of the reputation of those appellations of origin in France. [in other words, more argument/evidence is would be needed] The Court also finds that Budvar has not demonstrated how the reputation of the appellations of origin, assuming it does exist in France, would be likely to be misappropriated or weakened if Anheuser-Busch were allowed to use the signs in question for the specific goods sought. [ditto] The Court accordingly upholds the decisions of OHIM.

With regard to Case T-71/04, Anheuser-Busch informed the Court on 8 May 2007 that it had withdrawn its application for registration of the figurative sign containing the term BUDWEISER as a Community trade mark for goods in Class 32. The Court finds that the action in that case has become devoid of purpose and that there is no longer any need to adjudicate in the case".

If no appeal is lodged within two months, these decisions are final. The IPKat guesses that, even if Budějovický Budvar can't stop these Community trade mark applications proceeding, it can still sue in France under the Code rural for infringement of its appellation and see whether the French courts require a lower level of proof than do OHIM and the CFI. Merpel says, if Budějovický Budvar were prepared to compromise and call their version of Budweiser Czechvar in the United States, why won't Anheuser-Busch compromise and call their beer Buschvar in Europe?

Reviewed by Jeremy on Wednesday, June 13, 2007 Rating: 5
The IPKat licenses the use of its blog posts under a Creative Commons Attribution-Non Commercial Licence.