Jeremy Sunday, August 19, 2007 - absolute grounds for the refusal of registration, Jeremy Phillips
Today the IPKat is pleased to offer his readers a guest blog by barrister Daniel Byrne (Clarke Willmott), who writes:

"It is sometimes instructive to investigate which marks have been recently refused registration by the UK Trade Marks Registry under Article 3 of Directive 89/104 (absolute) grounds. This can be done using the refused mark search facility on the UK-IPO website. Sadly, as the reasons for the refusal are not shown, some educated guesswork is required. 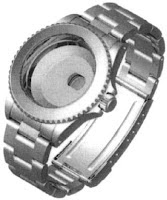 For example, an international application was made by Rolex for this picture (right) of a watch, designating the UK under the Madrid Protocol and specifying Class 14 (timepieces etc). Insofar as this application was for the shape of an object it was likely to have been refused under Article 3(1)(e) as it seems to be (at least partly) a shape which results from the nature of the goods themselves. In any event, it would probably have been refused on the basis of being non-distinctive under Article 3(1)(b), although it has been successfully registered at Rolex's 'home' registry, the Swiss Trade Mark Office. 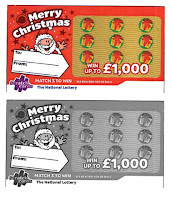 A sneak preview of the National Lottery’s Christmas scratch-card can be seen in their refused application here.

The University of Wales, Bangor was refused its application for the phrase CYMRAEG CLIR, which this blogger understands means “CLEAR WELSH”, and is being used in a way akin to the Plain English guidelines for writing clear and accessible public documents. In contrast, the mark PLAIN ENGLISH CAMPAIGN was successfully registered in 1996.

Because no reasons for the Trade Marks Registry’s refusals are provided in the database, it is entirely unclear whether FLYING FISH FEASTS was refused for being descriptive of feasts for flying fish or of feasts made from flying fish (or both). Flying Fish Feasts Ltd was incorporated in 2002 and seems to have been using the mark since at least early 2004 (for fishcakes!); this blogger wonders whether evidence of distinctiveness acquired through use would have assisted in the registration of this mark.

The Department of Health application for HEALTHY SCHOOLS (device-word) was refused. This application appears to be linked to the National Healthy Schools, as the specification covers "certificates to schools awarding achievement of Healthy Schools status" and can be seen being used in this publication. Perhaps if Jamie Oliver had been one of the children depicted jumping for joy at their healthiness, this mark would have had more success!

Beechams' were clearly not envisaging eating (pre-Jamie Oliver) school dinners in their application for DON'T FORGET YOUR TONGUE. In reality, this application was intended to be registered for dental and oral care products and was probably refused for serving in trade to indicate the intended purpose of the goods (Article 3(1)(c)). Likewise for Unilever's refused application for the word mark HOW DIRTY BOYS GET CLEAN. Look out for use of this unregistered mark on aftershave, hair colourants and beauty masks (for which, inter alia, Unilever sought its registration). Unilever has however been successful with its (backup?) application for LYNX HOW DIRTY BOYS GET CLEAN, which has proceeded to advertisement. 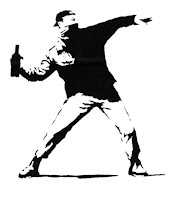 S & M Hosiery (who do not appear to have a website - a search for the company returns the top sponsored link as Marks and Spencer) applied for a device mark of a masked man throwing a bottle (molotov cocktail?) Did the Registry consider this mark unable to distinguish between the goods (it was for clothes) of one undertaking and those of another, or was there an issue of morality? Answers on a studded postcard please". 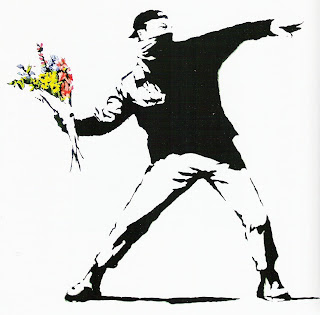 Update (20 August): Thanks to the first commenter Tom Cowling for pointing out the obvious similarity between the 'S&M Hosiery' application and the graphic work (right) by artist Banksy, as seen in the book 'Wall and Piece' (p42). The IPKat wonders whether the work by Banksy is original or if, like many of his other works, is at least partly copied from elsewhere.
Absolutely not registrable ...

Reviewed by Jeremy on Sunday, August 19, 2007 Rating: 5
The IPKat licenses the use of its blog posts under a Creative Commons Attribution-Non Commercial Licence.