Welsh patent applications: the results are in! 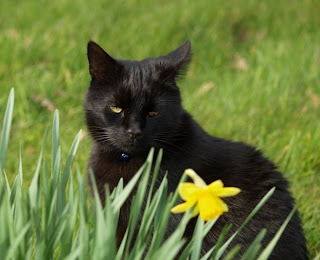 A couple of days ago the IPKat asked his readers how many patent applications they thought might have been filed in Welsh at the UK-IPO since this possibility was made available by the new Patents Rule 2007, offering a prize of a bunch of daffodils to the first one to get the right answer.
(right: Tufty's bodyguard Pod guards the limited supply of daffodils at Tufty's country residence)
The IPKat received a huge range of guesstimates, ranging all the way up to a rather optimistic 4,587. One anonymous commenter even tried to work out how many might have been filed by searching on espacenet (a futile exercise, of course, since very few applications since December 2007 will have been published by now anyway). Most people, however, seemed to think that the number would be very low.
The IPKat can now exclusively reveal that the very first commenter got the answer spot on. Commiserations go to Guy Veysey, Louisa McDonnell and John Collins, who came in just too late.  Exactly zero applications have been filed at the UK-IPO in Welsh over the past 13 months. Well done to whoever anonymous person made that comment.  A large bunch of daffodils is waiting at Tufty's country pad for you to come and collect in a few weeks, once they have had a chance to grow.
On a more serious note, the IPKat wonders what the point was in putting the effort in to change the law in the UK to provide the option of filing and prosecuting applications in Welsh, and provide a facility at the IPO to deal with them, when it was clearly an option that nobody was asking for, and nobody has in fact seen the need to use.  And in case anybody pipes up about the Welsh Language Act or similar, the IPKat would like to first be pointed to the exact legal requirement that made the change necessary.
Merpel wonders whether all this fuss the IPKat is making will perhaps prompt some Welsh-fluent patent attorney to file one just to spoil the record.
Tufty says he just wants to keep hold of his daffodils for now.
Welsh patent applications: the results are in!

Reviewed by David Pearce on Wednesday, January 28, 2009 Rating: 5
The IPKat licenses the use of its blog posts under a Creative Commons Attribution-Non Commercial Licence.