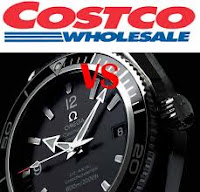 Here's just a quick note on Monday's US Supreme Court ruling in Costco Wholesale Corp v Omega SA, which ended in a 4-4 draw (Justice Kagan sat this one out).  The IPKat is hugely impressed with the commendable brevity of the Court's ruling (here) and wishes that all the cases he had to read were so short: the entire text of the per curiam judgment is shorter than "Office for Harmonisation in the Internal Market (Trade Marks and Designs) (OHIM)" ...

If you want to know what this dispute was all about, the AmeriKat summarized it here and reviewed the arguments on appeal here.

In essence, the story goes like this: retailers Costco bought a consignment of Omega watches outside the US which they imported and sold in California.  Each watch had an Omega globe design engraved on its back, this design being registered as a copyright work in the US. Omega sued Costco, saying that the sales of its watches constituted an unauthorised infringement of its importation and distribution rights.  Costco said it was entitled to import and sell the watches without Omega's permission: since the watches were genuine and had been put on the market by Omega, subsequent trade in them was permitted under the first sale doctrine (the US term for that Europeans call exhaustion of rights).

The trial judge held in favour of Costco, but Omega appealed successfully to the Ninth Circuit, which held that the first sale rule in the US copyright statute did not apply to foreign sales as a matter of law, since that statute lacked extraterritorial application. The Supreme Court agreed to hear Costco's appeal.  The rest is history.

It appears to the IPKat that, while there are respectable bodies of opinion both in favour of the Ninth Circuit's ruling and against it, the IP community on the other side of the Atlantic has not warmed to this non-result or its consequences. James L Bikoff, David K Heasley and Michael T Delaney (Silverberg Goldman & Bikoff LLP, Washington DC), writing for World Trademark Review, observe:


" ... [The ruling] creates uncertainties and disparities in copyright protection. Under the Ninth Circuit’s reasoning, which is left standing, “lawfully made under this title” ... limits the first sale exhaustion doctrine to goods sold in the United States. A copyright owner who uses a US company to manufacture its goods cannot, after the first sale, prohibit the re-importation of those goods into the United States. But a copyright owner who uses a foreign manufacturer can prohibit US distribution indefinitely. The disparity not only encourages the foreign manufacture of goods bearing US copyrights, it may also impair the ability for US-manufactured goods to compete in foreign markets that do not sustain US prices, because discounted goods sold abroad can be freely imported back into the United States and drive down the value of the product domestically. ...

With the United States importing more than $1 trillion of goods annually, Costco could affect global trade in any good bearing a copyrighted work. The affirmance of the Ninth Circuit’s approach could also affect the way foreign manufacturers prevent the importation of their goods in practice. Until the Supreme Court rules definitively on the subject, and resolves the uncertainties and disparities now pervading this area of the law, purveyors of foreign-made goods should adopt the mantra: caveat vendor".

Writing from Canada, Excess Copyright blogger and internationally respected commentator Howard Knopf suspects that legislative intervention may be on the way:


"This is a big setback for American retailers and consumers. It will be interesting to see if there is a push for Congress to weigh in here. However, given the maximalist mood in the USA, one cannot predict what Congress will do here. The lobbying would be intense on both sides. The USA might want to look at what we have in Canada - which is a separate regime for books that allows for exclusivity in order to protect Canadian publishers for cultural reasons".

Merpel adds, sadly, what it is a shame that international exhaustion of rights -- the most trade-related aspect of IP rights you can imagine -- is the bit that is explicitly excluded from the Agreement on Trade-Related Aspects of Intellectual Property Rights (TRIPS), Article 6 of which pathetically whimpers

For the purposes of dispute settlement under this Agreement, ... nothing in this Agreement shall be used to address the issue of the exhaustion of intellectual property rights".

Reviewed by Jeremy on Thursday, December 16, 2010 Rating: 5
The IPKat licenses the use of its blog posts under a Creative Commons Attribution-Non Commercial Licence.