This Kat, who enjoys the odd bit of online shopping, has been reading with interest the latest controversy over the Amazon ‘1-click’ ordering patent. Many readers will be aware that over the past decade there has been a long history of unsuccessful challenges to grants of the patent in the US, Canada and Europe. The most recent destination for battle has been Australia. 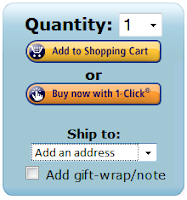 In September 1998, under the Patent Cooperation Treaty (PCT), Amazon filed a patent application for its ‘1-click’ ordering system (application no 94779/98) and claimed priority on the basis of earlier applications filed in the US in September 1997 and March 1998. After having undergone international preliminary examination under the PCT the application entered the national phase of processing in Australia in March 2000. The application passed examination and its acceptance was advertised in June 2003 (no 762175). Telstra Corporation Ltd (Telstra), one of Australia’s largest telecommunications and media companies, opposed the grant in September 2003 (filing its statement of grounds and particulars in December 2003). The proceedings would bumble on for almost eight years, with numerous requests (all granted) for extensions of time to serve evidence and for requests to adduce further evidence. Finally the matter came to a hearing in February 2011 and Hearing Officer Ed Knock gave his decision on 9 May 2011: Amazon.com, Inc [2011] APO 28.
Grounds of Opposition

Amazon’s patent application contained 141 claims. At the hearing, Telstra opposed the patent on two grounds: (a) the invention as claimed is not a patentable invention under subsection 18(1)(b) of the Patents Act (novelty and inventive step); and (b) the specification filed in respect of the complete application does not comply with subsections 40(2) and (3).
Specification
Under subsection 40(2) a complete specification must describe the invention fully, including the best method known to the applicant of performing it. Further, under subsection 40(3), the claim(s) must be clear and succinct and fairly based on the matter described in the specification.
Amazon’s specification was titled ‘Method and System for Placing a Purchase Order via a Communications Network’, and began by stating that ‘the present invention relates to a computer method and system for placing an order and, more particularly, to a method and system for ordering items over the Internet’. There are 141 claims, nine of which are independent (and have a matching consistory statement). The broadest claim is Claim 1 which reads:

‘1. A method for ordering an item using a client system, the method comprising:displaying information identifying the item and displaying an indication of a single action that is to be performed to order the identified item: andin response to the indicated single action being performed, sending to a server system a request to order the identified item.’

Telstra objected to the scope of the claims and meaning of the expression ‘single action’. It argued that the term ‘single action’ was unclear, that it included within its scope more than one action, and that it might require qualification by the word ‘only’.
Hearing Officer Knock framed his discussion of the word ‘action’ after consultation with the Macquarie Dictionary and with the wording of the specification. For him a key characteristic (at [50]) was that a ‘single action generally refers to a single event received by a client system that indicates to place the order’. This was so even though a single action may be preceded by multiple physical movements of the purchaser (eg moving a mouse so that a mouse pointer is over a button or a double click). In relation to a possible requirement for a qualification by the use of ‘only’, Hearing Officer Knock was satisfied (at [52]) that ‘a “single action” is, as a matter of logic, only a single action, and its redundant use may even introduce a lack of clarity into the claims’ (emphasis in original). Accordingly, the Hearing Officer found (at [59]) that the specification satisfies the requirements of subsections 40(2) and (3).
Novelty
The test for determining whether the invention lacks novelty is the ‘reverse infringement test’ as set out in Meyers Taylor Pty Ltd v Vicarr Industries Ltd (1977) 137 CLR 228 where Aickin J stated (at 235):
‘The basic test for anticipation or want of novelty is the same as that for infringement and generally one can properly ask whether the alleged anticipation would, if the patent were valid, constitute an infringement’.
Telstra relied on five instances of prior art to establish its ground of lack of novelty. These were:

(a) The Digicash ecash system;
(b) The Open Market Technical White Paper OM-TransactTM: Technical Overview;
(c) The Dr Dobbs Journal on-line article entitled ‘Implementing a Web-Shopping
Cart’;
(d) Telstra’s prior Australian patent application no 19173/97 (which concerned an
automated telephone connection system); and,
(e) A patent in the name of Hitachi.

Hearing Officer Knock found (at [86] and [90]) that the common general knowledge included:

(a) the display of order or item information, or instructions or user inputs, for Internet ordering systems in the form of Web pages using HTML code, and the use of a web browser by the customer to access and interact with such displays; and,
(b) the use of the following means by a client system or device to select information or send instructions or requests to the server system, clicking a mouse button over a pre-defined area of displayed information, a sound generated by the user, use of a television remote control, depressing a key on a key pad, using a pointing device, and selection of a displayed indication.

On the basis of this evidence, claim 1 was found to lack an inventive step (at [92]). This was because there appeared to be nothing defined in the claim which was not merely common general knowledge, except for the feature relating to the ‘single action’. However, when expressed in relation to the problem to be solved, the Hearing Officer considered (at [91]) that as ‘a matter of simple logic’, this was an obvious solution to the problem of reducing the number of actions involved in placing an online order (with the ideal scenario being just one action).
However, the inventiveness of the particular manner in which that single action functionality was achieved was a somewhat different story. For Hearing Officer Knock, it seemed (at [93]) that the use of cookies for that purpose may involve an inventive step. There was no evidence of such an approach in any of the prior art, nor evidence that the skilled person at the time would have regarded this as an obvious approach. In particular, he stated (at [96]) that the use of cookies in this invention was ‘both an elegant and inventive way of achieving one action ordering functionality’. Accordingly, claims 3 and 62 to 141, which all included cookies, were found to involve an inventive step.
Conclusion
The Hearing Officer found that claims 1, 4 to 7, 32 and 35 to 38 lacked novelty and that claims 1, 2 and 4 to 61 lacked an inventive step in the light of prior art. Therefore, Amazon's patent application included 141 claims, 60 of which were deemed invalid. To be successful, a patent application must not contain any invalid claims.
As the specification clearly contained patentable subject matter, Amazon was allowed 60 days to propose suitable amendments to overcome these findings. If suitable amendments are not proposed within that time, the Hearing Officer will refuse the application.
Dr Mark Summerfield of Patentology notes that the broadest surviving claim is claim 3 which, if rewritten in independent form, can be expressed as follows:

As far as this Kat are aware, this claim would be the broadest surviving claim of any of the ‘1-click’ patent family members.
The IPKat wonders how many more epic battles there can be over this one single patent.. Gven that it is now more than halfway through its 20 year duration, probably not many!
Merpel wonders whether Amazon could invent a way for her shop online but not have to pay for it …
Amazon '1-click' patent: now Australia rules

Reviewed by Catherine Lee on Sunday, May 22, 2011 Rating: 5
The IPKat licenses the use of its blog posts under a Creative Commons Attribution-Non Commercial Licence.