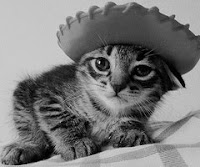 The AmeriKat is currently enjoying a fridge stocked full of proper lemonade, paper cartons of milk, and chile rellenos. This can mean only one thing - she is back in the land of the free and the home of the brave. She has returned home for an attempt of a "vacation" before she prowls over to INTA next week, but so far her Blackberry has been making it necessary to straddle the 7 hour time zone between work and play. However, today is cause for celebration in the U.S. as today is Cinco de Mayo, a holiday that commemorates the Mexican militia's victory over France in The Battle of Puebla in 1862. The day is celebrated with Mexican food and music throughout the US but mostly in predominately Hispanic areas, such as the AmeriKat's home state and current location of New Mexico. (picture, above - the AmeriKat in her celebratory hat) So in celebration of today, she is making her way to Albuquerque's Old Town to breathe in the sites and smells of the day. Feliz Cinco de Mayo!

Last Friday, Victor Whitmill, the tattoo artist who designed and tattooed the left side of former heavyweight champion Mike Tyson in 2003 sued Warner Brothers for copyright infringement over allegations that the studio has copied the tattoo design in its upcoming movie, The Hangover Part II. Whitmill has asked a Eastern District of Missouri court to injunct Warner Brothers from copying, distributing and publicly displaying the design in the film and promotional marketing of the sequel to the 2009 box-office success, The Hangover. 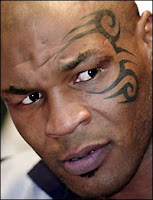 Whitmill, a resident of Missouri, created the tattoo for Tyson in February 2003 while living in Las Vegas. The copyright in the tattoo design, located on the upper left side of Tyson' face (picture, right), is owned by Whitmill and Tyson additionally signed a release acknowledging the same. The complaint argues that Whitmill has never reproduced, authorized or licenced the design to anyone else, making Warner Brothers use of the design even more "reckless". Whitmill claims that the Warner Brother's film, The Hangover 2, features a "virtually exact reproduction of the Original Tattoo, which appears on the upper left side of the Stu Price character's face, played by actor Ed Helms." The tattoo also features on Helms's face in the advertising poster for the movie (picture, below). A close-up of the tattoo does show that the features of the design are substantially replicated, but the scaling is smaller on Helms's face than it is on Tyson's. It should be noted that there is a possible interesting complication in this complaint is that Mike Tyson appeared in the first The Hangover movie in 2009.

Whitmill registered the copyright in the tattoo, known on the register as "Tribal Tattoo" on 19 April 2011. Although copyright registration is not compulsory to afford protection in the U.S. (thank you Berne Convention), a work of US origin must be registered before infringement proceedings are filed. Registration also affords a plaintiff the ability to claim for statutory damages and attorney's fees in some circumstances, as well as the ability to point to a prior registration when enforcing their rights. However, because the first publication of the work was in 2003, more than five years before the registration, the registration is not considered prima facie evidence in court. 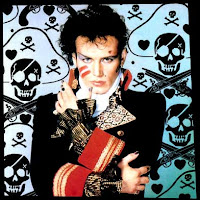 The most interesting part of this case is whether this work is protectable by copyright law. Like the UK, the US has a requirement that copyright protects "original works of authorship" that are fixed in a tangible form of expression. So far so good. The tattoo design is assumingly original and it is fixed by way of permanent ink onto flesh in an expression which is capable of communication. However the 1983 UK case of Merchandising Corporation of America v Harpbond, aka the Adam Ant case, may point that such a conclusion is not necessary easy to arrive at. The Adam Ant (picture, left) case centered on Adam Ant's facial decoration being refused copyright protection by a UK court because the designs were applied with face paint. Face paint, being removable, was deemed not to be a sufficient "fixation" under the Copyright, Designs and Patent Act 1988 because it was not sufficiently permanent to be deemed a "work".

However, Whitmill's work is permanently inked into the skin of Tyson, so unlike face paint, there is no danger of being easily erased, unless Tyson undergoes laser removal. If this case was in the UK, this surely must then be sufficiently permanent to be classified as a work and the same should also apply in the U.S. If so, is the lesson then that if make up artists and entertainers wish to have copyright protection in their facial decoration (a la David Bowie, Alice Cooper) they must tattoo it on their face? Perhaps more reasonably it would be better for the make-up artists to work from a sketch, and thus any copies of the work would be an infringement of the sketch and not the arguably non-permanent, unprotectable facial decoration.

The AmeriKat was reminded by a reader how interesting a case it would be where a work was tattooed onto a client with out permission from the copyright owner and infringement proceedings brought against the tattooist. What would the remedy be? Destruction, by way of laser removal, of the client's tattoo? Delivery up of the client himself?

Also what sort of terms should a client be signing up to with a tattoo artists? In this case Tyson signed a release saying that Whitmill owned the copyright in the work, but did Whitmill then grant Tyson a perpetual licence to publicly display the copyright work? If so, is there a potential claim against Tyson himself for apperance in the 2009 film? The AmeriKat thinks this is a fascinating discussion about the cross-section of decorative body arts, free speech and copyright. Do any readers have any first hand experience with this industry?
Letter from AmeriKat: Happy Cinco de Mayo!

Reviewed by Annsley Merelle Ward on Thursday, May 05, 2011 Rating: 5
The IPKat licenses the use of its blog posts under a Creative Commons Attribution-Non Commercial Licence.