Here's a round-up of intellectual property-based odds and ends for your interest and delectation:

The IPKat's friend, trade mark scholar Ulrich Hildebrandt, tells him that Carl Heymanns has just published his latest book, Marken und andere Kennzeichen. This book contains not only the complete case law of the Bundesgerichtshof since 1994 on trade mark matters but also probably all decisions of the ECJ and the Court of First Instance. If you (i) love trade marks or (ii) practise trade mark law and represent German clients and (iii), in either case, can read German, then this is the book for you.

Full details of Ulrich's book here
If you are an English-speaker with a masterly command of legal German and would like to translate this book for some remuneration but (alas) probably much less than the job is worth, email the IPKat here and let him know

Never too late for the TLT?

The World Intellectual Property Organization's Trademark Law Treaty of 1994 might be so old-fashioned that it had to be upgraded by the Singapore Treaty of 2006, but that doesn't stop countries acceding to it. Latest participants are France (as of 15 December 2006) and Bosnia and Herzegovina (as of 22 December 2006).

The number of contracting states for the Singapore Treaty, according to the IPKat, currently stands at zero. How strange, says Merpel, that France chose to decorate its flag with the corporate colours of Danone ... 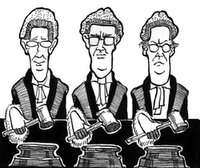 Don't forget there's a fascinating one-day programme coming up on 31 October, courtesy of LexisNexis Butterworths: it's Intellectual Property Enforcement and Remedies. There's a strong cast of speakers and the subject-matter (in the light of the implementation of IP Enforcement Directive 2004/48) is quite compelling. See you there?

Full details of the conference here

Last week the IPKat announced that he was planning some workshop seminars on the Gowers Review of Intellectual Property in the UK. Lots of interest has already been expressed and it looks as though all four projected dates will run. Full details will be circulated next month. In the meantime, here's the earlier announcement. If you'd like to express your provisional interest and receive further information, email the IPKat here.
FRIDAY BITS AND PIECES Reviewed by Jeremy on Friday, September 29, 2006 Rating: 5
The IPKat licenses the use of its blog posts under a Creative Commons Attribution-Non Commercial Licence.