BAXTER AND ABBOTT BATTLE OVER RESEARCH DATA; BACK TO THE CUPBOARD FOR MEDICINE USERS?

Another round in the battle of Baxter Healthcare Corporation and another v Abbott Laboratories and another has been fought out in the Patents Court for England and Wales, before Mr Justice Pumfrey who gave his ruling on Monday. This time the battle, noted briefly on the LexisNexis Butterworth service, was over disclosure of research data.

Right: er, not THAT sort of Baxter Healthcare ...

Pumfrey J dismissed the application. In the first place, he said, while in principle the documents sought were disclosable if relevant, Abbott hadn't actually identified how or why they were relevant. Secondly, an order of disclosure would be disproportionate and inconvenient in relation to any benefit that could be got from it.

The IPKat notes with approval the judge's observation that disclosure orders shouln't be made in respect of ongoing experiments: that could lead to disputable and uncertain results being introduced into heavy patent proceedings without any way of knowing the correct degree of weight to be attached to them. Nor was it fair on scientists if they were at risk of being exposed to the extra burden of disclosing interim research results. Merpel says, that's all very well - but what ever happened to the subtle art of using disclosure as a means of fishing for juicy information concerning your competitor's research? 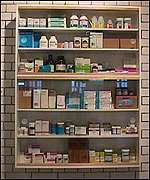 Back to the cupboard for medicine users?

An Advocate General's Opinion from the European Court of Justice on which the IPKat has so far failed to comment was given on 26 October in Case C-412/05 P Alcon Inc v OHIM, Biofarma SA.

In 1998 Alcon Inc applied to register the word TRAVATAN as a Community trade mark for phthalmic pharmaceutical preparations. Biofarma opposed, alleging a likelihood of confusion and citing its earlier Italian word mark TRIVASTAN for “pharmaceutical, veterinary and hygiene products; dietary products for infants or patients; plasters; materials for dressings; tooth fillings and dental impressions; disinfectants; herbicides and pesticides”. After Biofarma was put to proof of use of its earlier mark, proof was furnished for a “peripheral vasodilator intended to treat peripheral and cerebral vascular disturbance and vascular disorders of the eye and ear”. The Opposition Division agreed that there was a likelihood of confusion and refused the application, in a decision upheld both by the Board of Appeal and the Court of First Instance. Alcon appealed on various grounds, particularly challenging the notion that in respect of pharma products such as those in question, which were available in part on prescription, the relevant consumer should be taken to be the public at large rather than healthcare professionals.

Advocate General Juliane Kokott has advised the ECJ to dismiss Alcon's appeal. On the issue of who should be the relevant public for the purpose of testing if confusion was likely, she had this to say:

"43. Alcon contests the inclusion of end users in the relevant public. Since the products require a prescription, solely the doctor makes the decision as to their acquisition. Therefore only the perception of healthcare professionals is relevant. Another OHIM Board of Appeal, the Court of First Instance and the Court of Justice have already so decided.

44. The Office and Biofarma, on the other hand, take the view that the perception of patients matters too. The Office stresses that when patients are confronted by a mark, they are not to be misled as to the origin of the goods designated. Their perception is irrelevant only if their being confronted with the mark can be ruled out. Biofarma supplements this with the practical example of confusing two medicinal products in the medicine cabinet at home.

45. This limb relates, first, to a factual element, namely the determination as to the public addressed by the goods in question, and is inadmissible to that extent.

46. Second, at the same time it contests the interpretation of Article 8(1)(b) of Regulation 40/94 with regard to the definition of the relevant public. In addition, it implies that the reasoning for the findings of the Court of First Instance is insufficient, since reasons are not stated for the inclusion of end users despite submissions to the contrary. Both aspects concern points of law, and the limb is therefore admissible to this extent.

47. The Court of Justice focuses on the perception of the mark in the mind of the average consumer of the type of goods or services in question. In general, the perception of consumers or end users will play a decisive role as the aim of the whole commercialisation process is the purchase of the product by those persons. However, this is true only where the end user makes the decision on the purchase.

49. Even if regard is nevertheless in principle had to patients too, because – as submitted in particular by the Office at the hearing – they can influence a doctor’s prescription, in the case of medicinal products available only on prescription their influence has very little significance when compared with the doctor’s responsibility for the decision.

50. In particular, the possible influence exerted by patients cannot mean that the patient is regarded as the reasonably well informed and reasonably observant and circumspect consumer of those products. The average consumer must rather be determined by reference to the group that largely determines decisions on the acquisition of medicinal products available only on prescription, that is to say by reference to prescribing doctors.

51. The risk, pointed out by OHIM and Biofarma, of confusion on the part of a patient who, independently of prescription, is confronted with the mark, is also of little significance, under trade mark law at any rate. In the Picasso judgment, the Court of Justice regarded the moment when the choice between the goods and marks is made as crucial for assessing the likelihood of confusion. Other points in time, at which confusion on the part of consumers might be more likely because they display a lesser level of attention, are by contrast of secondary importance.

52. Therefore, Alcon is correct in its argument that the relevant public for medicinal products available only on prescription is to be determined by reference to healthcare professionals, and not patients. Despite this submission, the Court of First Instance does not deal with the legal question of how the public under Article 8(1)(b) of Regulation 40/94 is to be defined, nor does it explain why, contrary to Alcon’s submission, it includes end users in the relevant public.

53. Consequently, at the very least the reasoning in the contested judgment is insufficient, both so far as the interpretation of Article 8(1)(b) of Regulation 40/94 is concerned and with regard to the specific inclusion of end users. If the Court of First Instance were in fact to be proceeding on the basis that, irrespective of the product at issue, it is always the average end user that matters, that would involve, in addition to the defective reasoning, an incorrect interpretation of Article 8(1)(b) of Regulation 40/94.

55. In the case of trade marks for medicinal products sold without a prescription, the perception of the end user is of very much greater importance. While it is true that these products may be acquired at the instigation of doctors, in many cases the end users decide by themselves on their purchase. Therefore they are also advertised to end users.

The IPKat is unhappy about this analysis, which effectively closes the door on the doctrine of post-sale confusion. While confusion at the point of sale is crucial, in the real world in which decisions are made as to what to purchase or use, confusion may occur at any time. The wording of the relevant legislation does not confine "likelihood of confusion" to the point of sale, so why should the courts? Merpel agrees: trade mark law often pays lip-service to the notion that it is a consumer protection measure - and here's an opportunity for it to show that this is true, by protecting ordinary humans against the risk of confusing their TRAVATAN with their TRIVASTAN in the medicine cabinet at home.

Dangers in medicine cabinets here and here
BAXTER AND ABBOTT BATTLE OVER RESEARCH DATA; BACK TO THE CUPBOARD FOR MEDICINE USERS? Reviewed by Jeremy on Thursday, November 09, 2006 Rating: 5
The IPKat licenses the use of its blog posts under a Creative Commons Attribution-Non Commercial Licence.