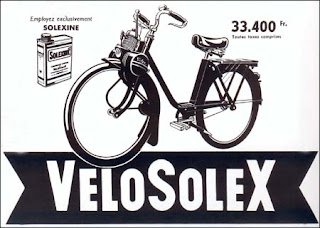 A VéloSolex is a simple motorized bike manufactured in France from 1946 to 1988; production by a licenseee in Hungary ended in 2002. About six million VéloSolex were produced, and they were loved for their simplicity and that certain "esprit de France" - baguette, Brigitte Bardot, lazy morning in the sun, anyone?

In 2005, the company Mopex S.A. started manufacturing a modernized version of the VéloSolex, using Chinese parts and fitted with a catalyst. Because Mopex does not own the trade mark rights in the sign VELOSOLEX, the product is (outside the Unites States, more below) sold under the name of "Black n Roll".

Mopex originally registered the domain name velosolex.com, but lost it to Magneti Marelli Motorpropulsion France S.A.S, which owned the trade mark rights in the sign at the time (WIPO, No. D2003-0187). The rights in the trade mark VELOSOLEX were then transferred to Sinbar Sarl, a company of the Cible 99 group of companies. It distributes an electric "Vélosolex" under the name of "eSolex". Sinbar obtained the domain name velosolex.com from Forsyte Corp., Nassau, who had registered the name in 2004 after Magnetti Marelli had apparently failed to renew it (WIPO, No. D2008-1667).

But that's not the end of the story for this contested domain name: in July 2010, Velosolex America LLC, New Jersey, requested the transfer of velosolex.com from Sinbar Sarl (and first had to learn that the language of the proceedings under the UDRP is the language of the registration contract, which in this case was French). Velosolex America owns a U.S. trade mark "VS VELOSOLEX" since 2002 and distributes the "Black n Roll" Solex in the United States under the trade mark "Velosolex". Sinbar owns, among others, an international registration with extension to various European countries with a priority of 1964. Velosolex America alleges in the UDRP complaint that Sinbar had, in a settlement agreement concluded over an U.S. opposition proceeding in 2006, not to challenge the rights of Velosolex America in the domain name velosolex.com.

The WIPO expert notes that the settlement agreement of 2006 is less clear on the subject than the Claimant would like to show. In his reading, the settlement only prohibits Sinbar from challenging Velosolex America's rights in the domain name velosolex.com once the domain name is registered in the name of Velosolex America, which it never was. There was also an issue regarding the parties to the settlement agreement, because Velosolex America is not a named party, rather Ascione Rent a Car, Inc., was counterparty to the agreement. The relationship and transfer of rights from Ascione Rent a Car, Inc. to Velosolex America remain unclear. The expert notes that the interpretation of the settlement agreement requires a depth of instruction and analysis for which the UDRP is unsuited ("En définitive, ces quelques explications démontrent que le complexe contractuel et l’ensemble des circonstances ayant entouré la conclusion de l’accord du 12 juillet 2006 exigent une analyse et une instruction que le cadre limité de la présente procédure ne permet pas de régler à satisfaction."). In view of the trade mark rights of the Respondent in the sign VELOSOLEX, its registration and use of the domain name velosolex.com was not in bad faith. Transfer denied (WIPO, No. 2010-1231 of 21 September 2010).

I suppose the story shows that nostalgic brands do indeed pose thorny problems for those who would like to revive them - or continue using them after a hiatus - as fellow Kat Neil has alluded to in his recent post on IPKat. This Kat also believes the WIPO expert was right to think that the UDRP is unsuited for subtle issues of contract interpretation; these thorny issues should be best left to courts. 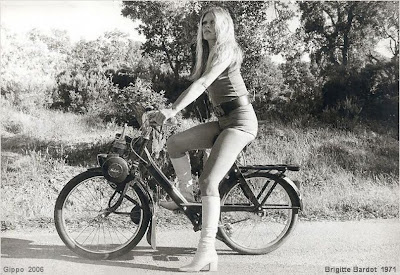 Reviewed by Mark Schweizer on Thursday, November 18, 2010 Rating: 5
The IPKat licenses the use of its blog posts under a Creative Commons Attribution-Non Commercial Licence.