Innocent ... until politely requested to be guilty

Jeremy Monday, March 14, 2011 - Jeremy Phillips, trade mark infringement
The IPKat has received various pokes and prompts to write something on the Innocent dispute, which has received some coverage in the British press.  Fortunately, before he could respond to any of them, his friend Fredericka Argent kindly delivered the following note, which pretty well says it all:


"The Daily Mail reports a story about Dawn Reid, a small business owner and vendor of a food supplement called ‘Innocent Vitamins’, who has been asked by Innocent Drinks, the international smoothie company part-owned by Coca Cola, to cease trading under that name. Mrs Reid’s food supplement, in the form of pills, is contained in a tub with the name ‘innocent vitamins’ in lower case letters, followed by the slogan ‘all goodness. no badness’. Since January, the food supplement has been sold for £6.99 per tub in Waitrose supermarkets, but it now faces being taken off the shelves. 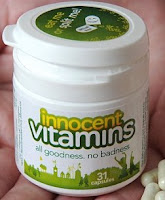 Mrs Reid has argued that the drinks and vitamins markets are separate and non-competing, but Innocent Drinks says that both their drinks and Mrs Reid’s pills are seen as health products and would therefore be competing goods. Innocent Drinks also argues that the lower case typeface of ‘innocent vitamins’, is written in too similar a style to its own logo: “innocent pure fruit smoothie”. The drinks company has claimed that these similarities have led to confusion among their consumers, but Mrs Reid claims that she has: “never had a buyer or customer who’s had any brand confusion.”

Interestingly, Marketing Week reports that Innocent Drinks’ lawyers wrote to Mrs Reid two weeks after they had applied for a Class 5 trade mark classification. Goods within Class 5 fall under the umbrella term ‘pharmaceuticals’, but include anything from antibiotics to hair care preparations and gluten free food. Also within Class 5 are vitamins, minerals and supplements. This makes one wonder whether Innocent Drinks’ fresh application caused them to scour the ‘Health’ aisle of supermarkets for goods which might be in competition with theirs.

Objectively, Mrs Reid’s argument may seem like a fair observation, and it may even remind readers of another ‘David and Goliath’ battle in the infamous case of GOLDEN BALLS, the mark owned by Gus and Inez Bodur, who faced opposition in their application for a Community trade mark from Intra Presse, the French company which organises the ‘Ballon D’Or’ (Golden Ball), the European Footballer of the Year Award [on which see the IPKat here and in earlier posts]. In that case, quite rightly, the Office for Harmonisation in the Internal Market (OHIM) ruled that the two marks were visually and phonetically different, not least due to the linguistic differences between them. This decision was followed by bullying tactics from the large French company, which proceeded to file a notice of appeal against the OHIM decision which was 600 pages long.  However, in battle of the two ‘innocents’, it looks like Innocent Drinks may be raising a fair complaint:

First, the reality of the brands market is that commonplace words often become trade marks, for example through acquired distinctiveness. Some obvious examples of this would be ‘Apple’ for computers, ‘Orange’ for telecommunications and the prefix ‘easy’ when applied to certain services.

Secondly, here it is not just simply the use of the word ‘Innocent’ that has stirred Innocent Drinks into action: comparing the get-up of the two products, there is little doubt that both the typeface as well as style of the Innocent Vitamins packaging are highly similar to those of Innocent Drinks. The unique selling point of Innocent smoothies has always been that they contain all natural ingredients with no added sugar and ‘no funny business’. This idea has been prevalent in the company’s advertising campaigns and slogans. Similarly, Innocent Vitamins is marketing itself as a healthy, sugar-free food supplement that contains ‘no badness’. As such, while Mrs Reid may not have realised it when branding her products, there is certainly a feeling here of a smaller product trying to take unfair advantage of the success of an earlier global product. This is especially so since both companies are in the business of health foods, even if they are likely to be stocked in separate aisles in the supermarket.

Thirdly, Innocent Drinks appears to have acted quite reasonably here. Defending his position, Innocent Drinks co-founder Richard Reed says: “Using such a distinctive name in a similar category is not an appropriate thing for another company to do... We have given the company a way out by respectfully asking them to stop using the brand name, and doubt that most other companies would be so tolerant. We have to protect our brand.”

So, while any company that has links with the Coca Cola conglomerate is unlikely to be seen by the public as the ‘good guy’, it does appear that on balance, Innocent Drinks is well within its rights to act in the way that it has.

In terms of legal action, for the moment it does not look as though this trade mark skirmish will turn into a battle: Mrs Reid has said that she wishes to seek an out-of-court settlement with Innocent Drinks, since she does not consider the link with them to be of any benefit to her. Advice to readers is therefore to watch the space in their local Waitrose ..."

The IPKat hopes that the gently-gently approach of Innocent/Coca Cola will work and that it will encourage other big brand portfolio owners to tread equally gently.  He remembers, in his days as an IP kitten back in the 1970s, asking one of the in-house IP heads at Unilever why it was that, with such a large number of registered IP rights, their name, and the names of their brands, were so rarely featured in the published Law Reports.  He was told that the company's softly-softly approach -- sometimes even offering to contribute towards the cost of reprinting the other party's stationery -- paid for itself in terms of cost-effective dispute resolution and generated respect and even some goodwill from third parties.  Does this still happen, he wonders?
Innocent ... until politely requested to be guilty

Reviewed by Jeremy on Monday, March 14, 2011 Rating: 5
The IPKat licenses the use of its blog posts under a Creative Commons Attribution-Non Commercial Licence.