Dumb and Dumber? No, Brave and Braver go Disney and Disneyer ...

Catherine Lee Sunday, September 09, 2012 - budget not-copies, consumer confusion, film titles
This week Disney is reported to have claimed (here and here) that Brightspark Production Ltd (a Brighton-based company) misled consumers by releasing several budget family DVDs which appear to be versions of Disney's own popular films. The Brightspark films are available in mainstream UK retailers, such as Sainbury’s, Tesco, Amazon and HMV for approximately £3 each. Disney allege that the title and artwork of the films is intended to mislead customers into thinking that they are purchasing Disney products. Although this Kat has not seen Disney’s letter before action, the claim would appear to be based on trade mark, passing off and/or copyright in relation to at least the two films below. 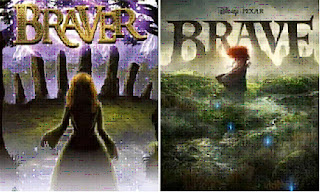 ‘Brave’ is a computer-animated fantasy adventure film produced by Pixar and distributed by Disney. The film's voice cast features famous actors including Kelly Macdonald, Julie Walters, Billy Connolly and Emma Thompson. To make the most complex visuals possible, it is understood that Pixar completely rewrote its animation system for the first time in 25 years.  ‘Brave’ tells the story of Princess Merida, who defies an age-old custom and thereby causes chaos in the kingdom. After consulting a witch for help, her family becomes cursed and Princess Merida must undo the spell herself before it is too late. 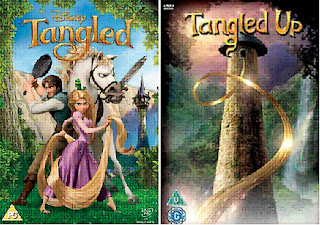 ‘Tangled’ is another computer-animated fantasy film produced by Disney, though unlike 'Brave' it's a musical comedy. The film's voice cast features famous actors including Mandy Moore, Zachary Levi and Donna Murphy.  ‘Tangled’ is loosely based on the German fairytale ‘Rapunzel’ and tells the story of a lost princess with long magical hair who yearns to leave her secluded tower for the world which she has never seen. The film, which cost approximately £162m to make. was released in 2010 and so far has had worldwide box office receipts of approximately £370m.

Disney issued a statement to the effect that:


‘People place great trust in the quality and creativity of Disney, and when it appears that another company is causing confusion among Disney consumers we will act to protect ourselves and the consumer. Disney believes Brightspark has demonstrated a pattern of misleading consumers with numerous releases that confuse and undermine the trust those consumers have in Disney.’

Brightspark said it was in discussions with Disney to find a 'mutually acceptable' resolution, adding:


‘Braver is an item for families on a budget and I very much doubt that anyone would confuse our production with the wonderful work of Disney. All we've tried to do is give parents something their children will hopefully find entertaining. We came up with our title around 18 months ago and if we thought consumers would mistake our film for Brave, we would have renamed it.’

The IPKat and Merpel are far too polite to suggest that the naming of Brave/Braver and Tangled/Tangled Up is anything other than complete coincidence, knowing how reticent Disney is about publicising its forthcoming productions. The Kats also recognise how easy it is for film companies to stumble upon confusingly similar names quite by chance, knowing how little attention they pay to the forthcoming productions of other companies with whom their products compete. Indeed, they note with approval that Brightspark's statement is quite different to Disney's, which shows their commitment to originality -- or perhaps to Pinocchio ...?

Reviewed by Catherine Lee on Sunday, September 09, 2012 Rating: 5
The IPKat licenses the use of its blog posts under a Creative Commons Attribution-Non Commercial Licence.