The end of copyright as we know it? Still on the Enterprise and Regulatory Reform Act (still unavailable)

This Kat has not had the chance to read the full text copyright provisions of the Act just because this is not yet available on parliament.uk. However, impatient souls will be relieved (as was this Kat) to learn that, as reported by the BBC, the full text of the Act might be made available to the public on Thursday.

Following its adoption, not only has the ERR Act already attracted a series of criticisms, but has also been promptly renamed the ‘Instagram Act’ by The Register journalist Andrew Orlowski, in reference to a recent furore surrounding the use of images posted to the image-sharing social network.

On an even gloomier tune, Dominic Young wrote that, by passing the ERR Act, the UK abolished copyright.

Who appears particularly upset with the copyright provisions of the ERR Act is campaign group Stop43, that represents a wide range of photographers and agencies in the UK.

According to Stop43, while there are numerous reasons why photographers should feel "Royally f*cked by the UK Intellectual Property Office and UK Government", there are two in particular that cause the greatest concerns: orphan works and extended collective licensing. 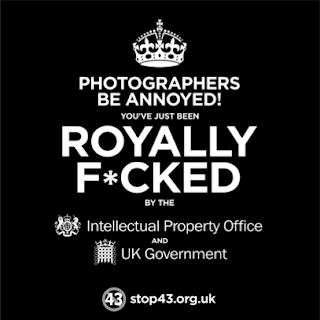 While The Department for Business, Innovations and Skills (BIS) defended the Act by saying that "The powers in the Enterprise and Regulatory Reform Act 2013 aim to make copyright licensing more efficient", according to Stop43, the claim that the ERR Act has made “copyright licensing more efficient" is true only if "by 'efficient' you mean 'no longer having to find, get permission from, and pay property owners before exploiting their property'. For almost any other kind of property, this idea would be outrageous. Imagine if this applied to cars, houses or bank accounts."

Still according to The Register, the ERR Act 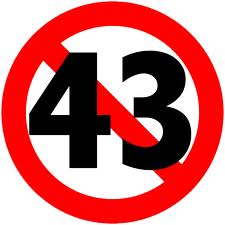 "contains changes to UK copyright law which permit the commercial exploitation of images where information identifying the owner is missing, so-called "orphan works", by placing the work into what's known as "extended collective licensing" schemes. Since most digital images on the internet today are orphans - the metadata is missing or has been stripped by a large organisation - millions of photographs and illustrations are swept into such schemes.

For the first time anywhere in the world, the Act will permit the widespread commercial exploitation of unidentified work - the user only needs to perform a "diligent search". But since this is likely to come up with a blank, they can proceed with impunity. The Act states that a user of a work can act as if they are the owner of the work (which should be you) if they're given permission to do so by the Secretary of State.

The Act also fails to prohibit sub-licensing, meaning that once somebody has your work, they can wholesale it. This gives the green light to a new content-scraping industry, an industry that doesn't have to pay the originator a penny.

In practice, you'll have two stark choices to prevent being ripped off: remove your work from the internet entirely, or opt-out by registering it. And registration will be on a work-by-work basis."

The most up-to-date draft version of the ERR Act available to the public (a link to which was provided by Andy J here) provided that the Secretary of State might by regulations authorise a subject (to be determined by such secondary legislation) to grant licences in respect of orphan works (also these to be defined by means of secondary legislation). 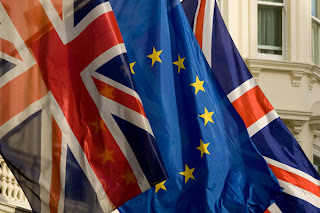 Differently from the recently approved EU Directive on certain permitted uses of orphan works (on which see here) which allows solely the reproduction and making available of the orphan works to the public, the regulations might provide for the granting of licences to do, or authorise the doing of, any act restricted by copyright.

Other differences from the EU Orphan Works Directive (of which, however, the ERR Act is not the implementation into UK law), concern also the beneficiaries of orphan works provisions, that do not appear to include just "publicly accessible libraries, educational establishments and museums, as well as by archives, film or audio heritage institutions and public-service broadcasting organisations ... in order to achieve aims related to their public-interest missions".

As regards extended collective licensing (ECL, this is something which was first implemented  in Nordic countries during the 1960s), according to the same draft version of the ERR Act, the Secretary of State might by regulations provide for a licensing body to be authorised to grant licences in respect of works in which copyright is not owned by the body or a person on whose behalf the body acts.

The ECL scheme UK Government appears to have in mind is modelled on an opting-out mechanism. As provided in the same most up-to-date draft version of the ERR Act, "the regulations must provide for the copyright owner to have a right to limit or exclude the grant of licences by virtue of the regulations."

When reading this provision, this Kat could not help but think what to do this weekend of the US Google Books Amended Settlement Agreement (ASA) which Judge Denny Chin rejected in 2011 (see 1709 Blog here). Among other things, the judge highlighted that "many of the concerns raised in the objections would be ameliorated if the ASA were converted from an ‘opt-out’ settlement to an ‘opt-in'".

As some IPKat readers pointed out, the copyright provisions of the ERR Act have remain unaltered since the Third Reading in the House of Lords and are thus included in the final text of the Bill, which we look forward to seeing.

The end of copyright as we know it? Still on the Enterprise and Regulatory Reform Act (still unavailable)

Reviewed by Eleonora Rosati on Tuesday, April 30, 2013 Rating: 5
The IPKat licenses the use of its blog posts under a Creative Commons Attribution-Non Commercial Licence.