The Worst Advertisement Ever: "Drink Schlitz or I'll Kill You"? 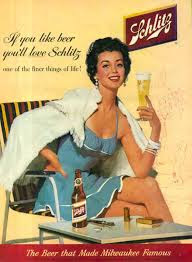 The continuing success of the U.S. cable series Mad Men here has turned the lives, loves and intrigues of the advertising industry of a half a century ago into an icon of modern television. Behind all of the Hollywood embellishments of the advertising world lies a single overarching question—when is an advertisement good or bad? After all, a media ad is a unique form of creation where the striving for creative excellence is ultimately subordinated to the ultimate goal of promoting a branded product or service.

Creative genius is no certain guarantee that an ad will be successful, but an absence of the necessary creative spark will likely result in the failure of the ad to achieve its goal of creating or sustaining heightened brand awareness. This Kat, feeling perhaps a bit mischievous, would like to focus on the dark underbelly of that world, namely the abjectly unsuccessful ad. Stated otherwise, what follows is a foray into perhaps the most unsuccessful ad campaign ever—the series of commercials that ran in the U.S. on behalf of Schlitz beer in 1977 (with an invitation to Kat readers to offer their own view of worthy challengers to the Schlitz beer ad debacle).

First a word about the Joseph Schlitz Brewing Company here(this Kat's assistant having remarked, "What in the world is Schlitz Brewing"?). A century ago it was the largest beer producer in the world(!), only relinquishing that title to Budweiser (and then on and off) as late as the 1950s. The centrality of Schlitz to the brewing industry was summed up in its famous tag line—"When you're out of Schlitz, you're out of beer." However, by the 1970s, for a variety of reasons, the company saw its position erode. One response was to approach the world-famous Leo Burnett ad agency with a request to get as quickly as possible commercials that reinforced the theme that connected Schlitz with "gusto". What followed was what has been described as the "Drink Schlitz or I'll Kill You" (or "Drink Schlitz or Die") campaign.

The ad campaign has been described by Bob Skilnik here as follows:


"The commercials varied from one featuring a Muhammad Ali-like boxer with a full entourage to a rugged outdoorsman with his pet mountain lion. In each of the four commercials, an off-camera voice asked the lead characters to give up their Schlitz beer for another brand. …. At the screening of the new commercials, the Burnett people watched as the boxer told a disembodied voice that he was going to knock him “…down for the count” for even suggesting a switch from the Schlitz label. The outdoorsman in one of the following commercials told his pet mountain lion to calm down after his choice of Schlitz beer was also challenged and snarled back to the animal, “Just a minute, babe. I’ll handle this.”

Presumably, the ad agency believed that it had created a gangbuster ad campaign. The only problem was that the public simply hated the ads. "Hate" is too mellow a word, the beer-drinking public loathed the ad campaign. Instead of "gusto" there was widespread public disgust. Not only that, but the public chose to vote by its feet, exchanging Schlitz beer for its competitors, for any beer, as long as it was not Schlitz. The ad agency was fired, but it was too late (indeed, the account manager at Burnett was apparently genuinely stunned at the public backlash to the commercial-- “I can assure you that we have no desire to threaten the people of the United States. It (the commercials) was supposed to be fun, tongue-in-cheek stuff.” ). No matter--the Schlitz brand had been mortally tarnished. "Drink Schlitz or I'll Kill You" turned out to be prophetic in an ironically inverted way here and here. People purchased less and less Schlitz beer. An inexorable decline in profits, market share and capacity utilization followed. By 1982, the company had been sold to the Stroh beer company (which itself collapsed in 1999). Between 1974 and 1982, the company that had once been the world's largest beer manufacturer had lost 90% of its value, recalling the collapse of finance houses such as Bear Stearns and Lehman Brothers in 2008.

To be clear, when we say "unsuccessful", we don't mean that the ad was creatively wanting. "Creativity" is ultimately a subjective matter. Thus, in the annual advertising Olympics, these being the commercials that run in conjunction of the American "Super Bowl" football game, much talk has surrounded the commercial that was run on behalf of Go Daddy, the internet domain name registrar, it being largely a graphically displayed kiss between model Bar Rafaeli and actor Jesse Heiman. The public seems divided on the creative merits of the ad. However, while the ad may have been raunchy in the eyes of some, it was certainly not a failure in the Schlitz sense. The opposite is true-- the company's goodwill does not seem to have been harmed (it was probably enhanced) and the two principals both appear to have furthered their respective careers. Not so with the Schlitz ad campaign.

This Kat recognizes that ads are very much a matter of local culture. He would be most interested if there are parallel instances of ad campaigns that have materially contributed to the decline of the brand or even to the demise of the entire company. Or is the "Drink Schlitz or I'll Kill You" saga in a league all of its own.

Reviewed by Neil Wilkof on Monday, April 15, 2013 Rating: 5
The IPKat licenses the use of its blog posts under a Creative Commons Attribution-Non Commercial Licence.