Darren Smyth Friday, February 06, 2015 - breast cancer, Genentech, herceptin, Hospira, inventive step, novelty, revocation, trastuzumab
The dispute between Hospira and Genentech in the UK courts concerning the antibody trastuzumab, more famously known as Herceptin (RTM), is getting a little confusing.  We had decision Mark 1 last April in relation to a first pair of patents, and then decision Mark 2 last November in relation to a second pair.  Both flow from the expert pen of Mr Justice Birss.  The IPKat has been informed that a third case is still proceeding at first instance.

The Mark 1 decision was about dosage regimes and a composition with specified antibody purity, and the Mark 2 decision about formulations (including the fascinating issue of the construction of product-by-process claims).

Now, hot of the press, the IPKat has got his paws on the appeal decision Hospira (UK) Ltd v Genentech, Inc [2015] EWCA Civ 57 (06 February 2015), posted on BAILII as he has been writing, relating to the Mark 1 case.  So dear readers, for a moment forget about last November and cast your minds back to last April.  The original case concerned two patents, related only in that they both concern trastuzumab, which is used for the treatment of breast cancer.  Other than that they are quite different, the first EP 1 210 115 being concerned with a dosage regime, and the second EP 1 308 455 with a purified composition.  The present appeal relates only to the first patent.  (Presumably the decision in relation to the second one was not appealed).

Birss J found the treatment regime claimed in EP 1 210 115, which involves an 8mg/kg loading dose and subsequent maintenance doses of 6mg/kg on a three weekly schedule, to be obvious.  (This dosage regime is called "8 + 6 q3w" in pharmacy-speak).  In the alternative, if the claim was not obvious, then the judge would have considered the patent invalid for insufficiency, because “the skilled team would not conduct a clinical trial of the claimed three weekly dosing regimen based on the information in the patent read in the light of the common general knowledge”. 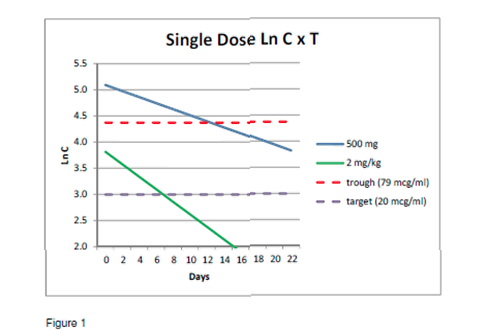 The appeal related only to the issue of inventive step.  The final point at issue seems a rather small one.  Genentech's case seems to have been that the judge was entitled to conclude that a dosage of 8 + 7.14 q3w (ie with a maintenance dose a little higher than that claimed in the patent) was obvious.  This conclusion followed from accepting the evidence of Hospira's expert Dr Earhart given in Figure 1 (illustrated).  As the Court of Appeal judgement delivered by Lord Justice Floyd (Lord Justice Elias and Lord Justice Kitchin concurring) memorably observed:

Genentech now recognises, however, that there is no realistic prospect of this court re-visiting the judge's conclusion that a dosing regimen of 8 + 7.14 q3w was obvious.


Genentech's case on appeal was that the only basis on which the judge was entitled to hold the maintenance dose of 6mg/kg rather than 7.14 mg/kg obvious was that of further evidence of Dr Earhart given in Figure 2, relating to the lower limit of the maintenance dose; however, Birss J had not accepted the evidence in Figure 2 was sound.  Having rejected Figure 2, Birss J should not have found the claims obvious, Genentech alleged.

Not so, said Floyd LJ.  He pointed to a number of points in the record that supported the judge's conclusion that the 6 mg maintenance dose was obvious as it would still be expected to fall within the therapeutic window.  One factor was the clinical variability in any case, which was stated to allow being up to 20% off in the regime; another was the influence of the judgment of the pharmacokineticist in a field that was not slavish to calculations.  Therefore, he found:

I believe I have said enough to show that there was ample material before him [the judge] to conclude, solely on the basis of Figure 1 and the evidence given in relation to it, that the FDA label would render obvious a range of doses which included 8 + 6 q3w. The judge did not have to determine the lower limit of that range provided that he was satisfied on the balance of probabilities that 8 + 6 q3w lay within it.


Hence the appeal was dismissed.

There is not a lot in this judgement, as is often the case when a first instance decision is affirmed.  It does have brevity to commend it:  the entire matter is disposed of in 58 paragraphs (or 56 if you discount the concurrences).

Reviewed by Darren Smyth on Friday, February 06, 2015 Rating: 5
The IPKat licenses the use of its blog posts under a Creative Commons Attribution-Non Commercial Licence.