The IPKat was invited to attend British Brands Groups Reception last night, which was held at the Museum of Brands in London's fashionable Notting Hill. Although she prefers water (still - not sparkling) to Champagne, this Kat betook herself to this merriment and was not disappointed.
John Bebbington (right), chairman of the British Brands Group (BBG), gave a short and concise presentation ("under ten minutes") highlighting the BBG's activities over the last years, which

include the encouragement of "vigorous competition in the grocery market" (a new Code of Practice is coming into force today). The BBG also held an exhibition on branding in the House of Commons last year which eventually (after a 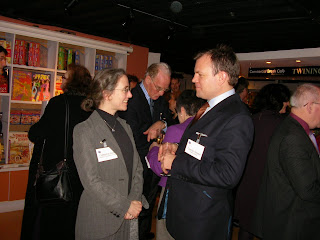 discussion with IP Minister David Lammy) led to a Ministerial conference "Branding in a modern economy" last November. John advised that the accompanying report should be out soon, making a "clear case for branding to feature centrally in Government policy". Other BBG activities over the last year, inter alia, included brands lectures and efforts to tackle misleading and look-alike packaging (BBG has commissioned a consumer study on this topic) - surely a worthwhile cause.
It was an interesting evening and the attendees were equally impressed by the Museum of Brands' numerous exhibits and impressive "time tunnel" of cartons and bottles as they were by the multitude of networking possibilities the evening provided (see left). This Kat would like to take this opportunity to thank Kat Jeremy for allowing her to take his place.
Brands and a museum with a time tunnel - the British Brands Groups' Annual Reception

Reviewed by Birgit Clark on Thursday, February 04, 2010 Rating: 5
The IPKat licenses the use of its blog posts under a Creative Commons Attribution-Non Commercial Licence.