Coexistence and the Omega saga 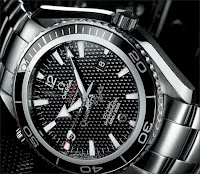 Although reckoned by some to be a scholar, the IPKat has always had problems remembering which party is which in cases in which the warring faction have the same name. The Chancery Division (England and Wales) decision at the end of last month from Mr Justice Arnold in Omega Engineering Inc v Omega SA and others [2010] EWHC 1211 (Ch) was always going to be a tough job for him.
Right: nice watch, but it stopped in 1983 ...
This was an appeal by Omega the watchmaker against a hearing officer's dismissal of its opposition to an application by Omega the engineering company to register the trade mark OMEGA in relation to "instruments and apparatus intended for a scientific or industrial application in measuring, signalling, checking, displaying or recording heat or temperature and having provision to display the time of day" in Class 14. In 2007 the engineers applied to register the trade mark; the watchmaker objected on a number of relative grounds, pleading earlier registered and unregistered rights in the word Omega for identical and similar goods and claiming, where appropriate, a likelihood of confusion.
The engineers weren't too pleased with this, saying that the watchmaker had no right to oppose the application since it promised not to do so under the terms of a co-existence agreement between the parties way back in 1983. In clause 5 of that agreement, the watchmaker undertook not to object to the engineers' use or registration in the United Kingdom of certain "excluded goods". These goods were actually listed in clause 3 of the same agreement, the wording of which being identical to the specification of the goods listed in the engineers' application. According to the engineers, since the watchmaker had consented to the registration of the trade mark it was precluded by the Trade Marks Act 1994, s.5(5): "Nothing ... prevents the registration of a trade mark [on relative grounds] where the proprietor of the earlier trade mark or other earlier right consents to the registration".
The hearing officer held that consent was a bar to opposition on relative grounds by virtue of s.5(5) and that, on its true construction, the co-existence agreement amounted to consent to registration of the excluded goods in any appropriate class. However, the watchmaker was unhappy with this and appealed. In its view the agreement, if it applied to anything at all, only barred it from opposing an application in respect of goods in Class 9, but not Class 14. Further, the decision of the Court of First Instance of the European Communities in Case T-90/05 Omega SA v Office for Harmonisation in the Internal Market [2007] ECR II-145 (noted here by the IPKat) meant that such an agreement was irrelevant to an objection made on relative grounds. In any event, the hearing officer considered that s.5(5) had been impliedly repealed, since the Secretary of State had exercised his powers to provide that a trade mark could be refused registration on relative grounds even where consent had been given, where the proprietor of the earlier trade mark raised an objection in opposition proceedings. In response, the engineers not only defended the appeal but issued proceedings for breach of contract and sought summary judgment.
Mr Justice Arnold, giving summary judgment in favour of the engineers, dismissed the watchmaker's appeal. In his view

* The hearing officer had correctly decided that "excluded goods" meant the goods as listed in clause 3 of the agreement, regardless of their class.
* However, while the Court of First Instance in Case T-90/05 said that a co-existence agreement was irrelevant to the assessment of the likelihood of confusion, this was not so. The Court's reason for saying this was not set out, but one possible reason was suggested that the agreement was not a "fact". This was not so: the existence of an agreement between the parties was a very palpable fact.
* The fact that a co-existence agreement was a private right did not mean that it was irrelevant, since an opponent could invoke a private right as a relative ground of objection under Article 8 of the Community Trade Mark Regulation, and Article 52(3) of the same Regulation explicitly stated that a coexistence agreement was relevant to an application for a declaration of invalidity.
* It would there be unjust if a party who consented to the registration of a trade mark could successfully oppose the application to register it.
* It was unsatisfactory to say that an applicant could apply to a competent national court for an injunction to restrain an opponent from opposing -- even assuming that there was a competent national court which had both subject matter and personal jurisdiction.
* Section 5(5) was not repealed, was not inconsistent with subsequent legislation and was in harmony with the Trade Mark Directive itself.

Says the IPKat, this decision gives clear support for the validity of coexistence agreements as a means by which businesses can sort out their own business arrangements unfettered by the bureaucratic inconveniences of an opposition system that's really designed for parties that don't have pre-existing agreements with one another.
Omega 1 here
Omega 2 here
Omega 3 here
Another reason why the IPKat likes this decision here
Coexistence and the Omega saga

Reviewed by Jeremy on Monday, June 07, 2010 Rating: 5
The IPKat licenses the use of its blog posts under a Creative Commons Attribution-Non Commercial Licence.