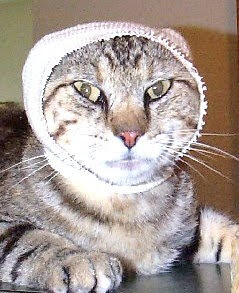 Negative pressure, positive outcome. While the rest of the world has its eyes trained on the United States, desperately seeking first sight of In re Bilski, patent litigation is still taking place elsewhere, as is evidenced by last week's carefully-framed decision in KCI Licensing Inc and others v Smith and Nephew plc and others [2010] EWHC 1487 (Pat), a ruling of Mr Justice Arnold (Patents Court for England and Wales).
Right: the IPKat is all in favour of dressings that don't press on his ears

This case, the second to be brought by KCI against Smith & Nephew (S & N) in respect of its negative pressure wound therapy (NPWT) apparatus, involved patents for improved apparatus for use in NPWT. This remarkable therapy, pioneered by two researchers at Wake Forest University), was the subject of an international patent application by the university, referred to in these proceedings as Argenta -- the name of the research team leader. Argenta led to the subsequent grant of a family of patents, for which KCI was the exclusive licensee.
According to KCI, S & N, through their own NPWT apparatus, infringed two members of the university's patent family: 'Wound drainage equipment' (referred to as 504) and 'Wound drainage canister' (950). 950 was a divisional of 504, both sharing the same priority date. Claim 5 of 504 related to reticulated foam, a process by which a very open-celled foam could be made by removing most of the cell walls so that only a net-like structure remained; it also disclosed apparatus for use in the technique described in Argenta, the principal feature of which was that it comprised a removable and disposable canister for collecting fluids sucked from the wound.
The specification of 950 was identical to that of 504. Claim 7 of 904 stated that "[the canister] includes a gel-forming substance which is capable of immobilising drainage fluids within the canister". The priority document, relied on by KCI, was a US patent application which named one Lina as the sole inventor of the invention, for which he was the sole applicant. He had signed a confidentiality agreement, paragraph 3 of which provided that

"I hereby assign and agree to assign to the Company [KCI] all right, title and interest in all confidential information, inventions and improvements conceived or developed by me, alone or in conjunction with others, during my employment and for a period of three (3) years after termination for whatever reason, which relate to any phase of the Company's business".

S & N denied infringement of 504 and 950, also counterclaiming for revocation of both patents, mainly on the ground of lack of inventive step in light of Argenta, the difference between Claim 5 and Argenta being that Claim 5 required the use of a reticulated foam.

KCI called two experts, one of whom gave evidence that gel-forming substances were not common general knowledge among design engineers with experience of designing medical devices, the other showing that the clinician forming part of the skilled team would have approached implementing Argenta with scepticism.
Issues arose as to, inter alia, whether KCI had the right to claim priority under s 7(2) of the Patents Act 1977 (the Act) at the date of filing the application by virtue of the confidentiality agreement. Under s.7,

"…(2) A patent for an invention may be granted (a) primarily to the inventor or joint inventors; (b) in preference to the foregoing, to any person or persons who, by virtue of any enactment or rule of law, or any foreign law or treaty or international convention, or by virtue of an enforceable term of any agreement entered into with the inventor before the making of the invention, was or were at the time of the making of the invention entitled to the whole of the property in it (other than equitable interests) in the United Kingdom;

The court had to consider (i) whether paragraph 3 was effective to assign Lina's interest in the invention to KCI, (ii) whether it would be obvious to a skilled team to select a reticulated foam for use as the dressing, thus constructing apparatus falling within claim 5, (iii) whether it would be obvious to devise a canister falling within Claim 7, or to include within the canister a gel-forming substance which was capable of immobilising drainage fluids and (iv) whether S & N had infringed claim 5 of 504 as suppliers of essential parts for infringing purposes by selling certain pumps and canisters

Arnold J held the disputed patents valid and infringed. In his view

*it was clear from the Patents Act 1977 s.7(2) that a patentable invention was "property" and that the inventor was the first owner of that property unless one of the circumstances mentioned in s.7(2)(b) applied;

* this being so, paragraph 3 of the agreement with Lina was effective to assign legal title to the invention to KCI, which was his successor in title at the date of application, and the patents were entitled to the claimed priority date;

* even if information was not disclosed by a specific item of prior art and was not common general knowledge, it might nevertheless be taken into account as part of a case of obviousness if it could be proved that the skilled person, faced with the problem to which the patent was addressed, would acquire that information as a matter of routine;

* here there was no evidence that the design engineer would, as a matter of routine, carry out a search which would lead him to reticulated foam. Accordingly, it was not obvious to employ reticulated foam as the dressing for use in NPWT apparatus;

* once it is accepted gel-forming substances were not common general knowledge, it follows that it would not have been obvious to use such a substance to solve that problem;

* with regard to secondary infringement, where it is alleged the defendant supplied a means by which a patented invention is put into effect, the Patents Act 1977, s.60(2) made it clear that there could be infringement not merely if the supplier had known that the means were intended to put the invention into effect, but also if that would be obvious to a reasonable person in the circumstances -- the relevant intention had to be that of the person supplied. In the circumstances, some of the canister sales infringed that provision, while others did not.

Says the IPKat, in reaching his decision on the s.7(2) point, the judge found support (at para.70) from a decision of the European Patent Office's Legal Board of Appeal in Case J19/87 Burr-Brown /Assignment [1988] EPOR 350 to the effect that

Reviewed by Jeremy on Sunday, June 27, 2010 Rating: 5
The IPKat licenses the use of its blog posts under a Creative Commons Attribution-Non Commercial Licence.