Heartache for heartburn drugmaker, though court sweetens the bitter pill 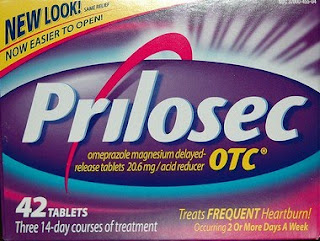 If you're too busy to read all 920 paragraphs of Case T-321/05 AstraZeneca v Commission, delivered today by the General Court of the European Union, let the IPKat help you at least find out what all the fuss is about. Aided only by his native wit and his well-informed friend Stephanie Bodoni (Bloomberg), he can tell you that the day was one of sweetness and bitterness for drug company AstraZeneca.

This morning the European Union's second-highest court [that's the second-highest of two, unless you count the EU's Civil Service Tribunal] upheld the finding of the European Commission that AstraZeneca -- the UK's second-largest pharma company -- misled patent officials and flouted antitrust rules in order to keep a generic competitor off the market. However, the company s fine from 60 million euros to a mere 52.5 million euros [i.e. more or less the cost of buying a good footballer]. The product which AZ had so mischievously sought to keep to itself was Omeprazole, sold as Prilosec and Losec heartburn medicine (among other names).
AstraZeneca had challenged the European Commission's decision back in June 2005 to fine it for market abuse and misleading patent offices in Germany, Belgium, Denmark, Norway, the Netherlands and the United Kingdom, not to mention numerous courts, over Prilosec. While this finding remains unscathed, the General Court [correctly, in this Kat's view] reversed the Commission's finding that AstraZeneca breached EU rules by withdrawing market approvals for older versions of the medicine in Denmark and Norway, thus preventing market entry by generic producers and parallel importers.
Heartburn in cats here
The Commission's decision (Case COMP/A.37.507/F3 – AstraZeneca) here
How the news was broken by Reuters, Wall Street Journal and the Financial Times
Heartache for heartburn drugmaker, though court sweetens the bitter pill

Reviewed by Jeremy on Thursday, July 01, 2010 Rating: 5
The IPKat licenses the use of its blog posts under a Creative Commons Attribution-Non Commercial Licence.