The first civil senate of the German Bundesgerichtshof, which is, inter alia, responsible for competition law matters, decided yesterday in the "Hartplatzhelden.de" case (28 October 2010, case reference I ZR 60/09) that a football association has to accept it when video film clips of amateur football games held by its member clubs are made publicly accessible via the Internet. While the full decision has not been published, the court has issued a press release which is summarised below and which can be accessed by clicking here (in German). In case you wondered: Hartplatzhelden is German for hart court heroes...

On the its website "www.hartplatzhelden.de" the defendant operates an Internet portal that is financed by advertising. Users of the website can upload their on clips of amateur football games showing excerpts from such games that are up to 1 and 1.30 minutes long. Other Internet users can access and watch these videos free of charge. The claimant, the Württembergischer Fußballverband e.V. (the football association of Württemberg), which organises the football games, is of the view that it should have the exclusive commercial exploitation rights in relation to the games. As such, it asked the defendant to cease publication of the video clips and based its claim on 'misappropriation' ("unzulässige Leistungsübernahme"), anti-competitive obstruction and an unlawful interference with its right to an established and operative business ("Recht am eingerichteten und ausgeübte 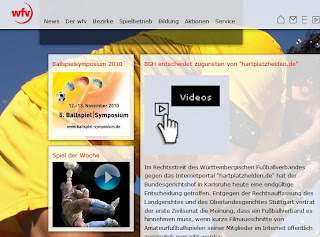 The Bundesgerichtshof in turn denied an exclusive exploitation right of the football association of Württemberg and dismissed the claimant's case. The Bundesgerichtshof disagreed with the Higher Regional Court in some points and held that the publication of the video clips could not be considered as an unfair imitation of someone else's protected work (geschütztes Leistungsergebnis) in the sense of § 4 No. 9 letter b UWG (German Act of Unfair Competition). The court stressed that the claimant's work in the form of organising and executing football games also did not require this type of protection. The judges took the view that claimant could adequately ascertain its commercial exploitation of the football games held by its member clubs through prohibiting under its house rules (Hausrecht) that visitors make video recording of such games. Finally, the court also did not accept the claimant's further arguments concerning a exclusive exploitation right of sport associations.

The claimant, the Württembergischer Fußballverband e.V., has issued a press release on its website stating that it will wait for the full decision and the court's detailed reasoning before deciding how to proceed in the future as a "football family". Well, the association clearly appears to be a good sport about it... for now. Hartplatzhelden.de has also commented about the decision stating that they are "happy and relieved" and that it has been a tough game for them. This Kat can't help but whether the Württembergischer Fußballverband e.V. should perhaps just regard the short 1 minute fan videos as free advertisement for its games? Or is this a little naive of me? Thanks go to follow blogger Mark Schweizer... why do I think you may have a comment or two to make here....?
BGH decides in "Hartplatzhelden.de" case

Reviewed by Birgit Clark on Friday, October 29, 2010 Rating: 5
The IPKat licenses the use of its blog posts under a Creative Commons Attribution-Non Commercial Licence.