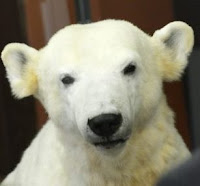 Two years after his sad and untimely death, German celebrity polar bear Knut (right) is again in the news and -- still (!) -- in the centre of a trade mark dispute.  Our readers will recall Knut's rise to global fame and the various trade mark issues surrounding the marketing of Knut and other high profile (polar) bears. Two weeks ago German media reported (here and here) that a sculpture of KNUT, covered in his own skin and with a damp nose (?!), had gone on display in Berlin. But that is not all – the legal disputes surrounding KNUT trade marks also continue.

The General Court of the European Union is today concerned with Knut-related dispute Case T=250/10 KNUT IP Management v OHIM — Zoologischer Garten Berlin (KNUT — DER EISBÄR; in English: KNUT – the polar bear). The court has been asked by KNUT IP Management Ltd to annul the decision of OHIM's First Board of Appeal of the Office of 17 March 2010 in Case R 650/2009-1.

KNUT IP Management Ltd contends an infringement of Article 8(1)(b) of Regulation 207/2009, because in itsview there is no likelihood of confusion between the marks.  In a nutshell: the whole dispute hinges on a detailed comparison of the goods and services and on how the element “DER EISBÄR” affects the similarity of marks.

To be continued..... no doubt since we live in interesting times where even a 'dead celebrity zoo animal' can still be worth millions.

Reviewed by Birgit Clark on Wednesday, March 13, 2013 Rating: 5
The IPKat licenses the use of its blog posts under a Creative Commons Attribution-Non Commercial Licence.