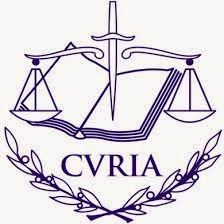 Today it's Copyright Thursday at the Court of Justice of the European Union (CJEU). Not only is the Court just about to rule in in Case C-360/13 Public Relations Consultants Association v Newspaper Licensing Agency, but Advocate General (AG) Jääskinen has just released his Opinion [not yet available] in Case C-117/13 Technische Universität Darmstadt v Eugen Ulmer KG.

This is a reference for a preliminary ruling from Germany seeking clarification as regards digitisation of works by university libraries, and relevant exception(s) under Directive 2001/29/EC (the InfoSoc Directive).

As this blog reported at the time when the case was refereed, the core issue on which the Bundesgerichtshof [the German Federal Court of Justice] is seeking guidance from the CJEU is whether, following the scanning of a book by a university library to allow its electronic reading, the book publisher may prevent further unauthorised reproductions of the book, say by means of library terminals that allow library users to print out on paper or store on a USB stick the works made available there.

The collection of the Darmstadt Technical University library includes a history book by Winfried Schulze, which the library scanned in 2009 without authorisation from the copyright holder (this being the book publisher, ie Ulmer), and made available to its users. In this regard, the number of simultaneous readers of the digital version could not exceed the number of analogue copies [= one] of the book that were actually available in the library’s collection. However, users of the digital version could print or save in their devices (such as USB memory sticks) excerpts from the book or even the book in its entirety. It is not difficult to imagine that, once the user had saved the work in his/her device, he/she could access it even from outside the library.

Ulmer was not particularly happy with the library's arrangements and, following a failed attempt to offer the university the possibility of purchasing its own ebooks, it brought proceedings for copyright infringement over unauthorised scanning of Schulze's book and other works.

Following partial victory before the Landgericht of Frankfurt am Main (Frankfurt District Court), both parties appealed before the Bundesgerichtshof, which wondered whether the university could actually rely on the exception pursuant to Article 52b of the German Copyright Act [this is the transposition into German law of Article 5(3)(n) of the InfoSoc Directive], which so states:

"So far as there are no contractual provisions to the contrary, it shall be permissible to make published works available from the stocks of publicly accessible libraries, museums or archives, which neither directly nor indirectly serve economic or commercial purposes, exclusively on the premises of the relevant institution at terminals dedicated to the purpose of research and for private study. In principle, reproduction of a work in excess of the number stocked by the institution shall not be made simultaneously available at such terminals. Equitable remuneration shall be paid in consideration of their being made available. The claim may only be asserted by a collecting society."

Thus, the court decided to stay the proceedings and refer the following questions to the CJEU:

According to this morning's press release, the AG Opinion is that a Member State may authorise libraries to digitise, without the consent of the rightholders, books they hold in their collection so as to make them available at electronic reading points.
While the InfoSoc Directive does not allow Member States to authorise users to save a book digitised by a library onto a USB stick, it does not prevent, in principle, the book from being printed as a private copy.

It is true that Member States must grant authors the exclusive right to authorise or to prohibit the reproduction and the communication to the public of their works, but Member States may also provide for specific exceptions or limitations to that right. Pursuant to Article 5(3)(n) of the InfoSoc Directive, this option exists notably for publicly accessible libraries which, for the purpose of research or private study, make works from their collections available to users by dedicated terminals.

According to the AG, even if the rightholder offers to a library the possibility of concluding licencing agreements for the use of his works on appropriate terms, the library may avail itself of the exception provided for in favour of dedicated terminals. It is only when such a contract has already been concluded that the library may no longer avail itself of the exception.

The AG held the view that the Directive does not prevent Member States from granting libraries the right to digitise the books from their collections, if their being made available to the public by dedicated terminals requires it. That may be the case where it is necessary to protect original works which, although still covered by copyright, are old, fragile or rare. That may also be the case where the work in question is consulted by a large number of students and its photocopying might result in disproportionate wear.

However, the AG made clear that the Directive permits not the digitisation of a collection in its entirety, but only the digitisation of individual works. It is particularly important not to opt to use dedicated terminals where the sole purpose of doing so is to avoid the purchase of a sufficient number of physical copies of the work.

Lastly, the AG took the view that the Directive does not allow the users of dedicated terminals to save the works made available to them on a USB stick. He noted in particular that the exception provided for in favour of dedicated terminals previously constitutes an exception to the rightholder’s exclusive right of communication. In the view of the AG, the concept of communication excludes from the exception’s scope the option of saving the work onto a USB stick, since that constitutes not communication by the library, but the creation of a private digital copy by the user. Furthermore, such a reproduction is not necessary for preserving the effectiveness of the exception, even though it would be useful to the user. In addition, the exception in question does not cover an act by which the library makes a digital copy accessible to the user so that the user may later make a copy and keep it on a USB stick.

While the AG was of the view that the exception provided for in favour of dedicated terminals no longer covers the printing of a paper copy, he nevertheless noted that the printing of a work available on dedicated terminals may be covered by other exceptions provided for by the Directive, including, in particular, the exception of private copying. In that regard, the AG saw no difference between a photocopy of pages of a work physically present in the library collection and the printing of pages of a digital copy. The risk of unlawful distribution on a large scale, present in the case of digital copies, does not exist in the case of the printing of a paper copy.

When the Opinion is made available, further analysis will follow, so: watch this space!
BREAKING: AG Jääskinen says that a Member State may authorise libraries to digitise individual works without rightholders' consent

Reviewed by Eleonora Rosati on Thursday, June 05, 2014 Rating: 5
The IPKat licenses the use of its blog posts under a Creative Commons Attribution-Non Commercial Licence.