Jeremy Wednesday, October 01, 2014 - Jeremy Phillips, patent filings, statistics
Last month, in "The Great British Vanishing Act: where has home-grown patent filing gone?", Peter Arrowsmith (partner in London-based patent attorneys Cleveland) opened what turned out to be a lively debate as to whether current statistical trends are describing the end of the British inventor or can be explained by other, less depressing reasons.  In the post below, Peter responds to some of the hypotheses that have been offered for an apparent decline in UK patent filings by UK applicants that does not seem to be reflected by filing figures for some of the UK's closest trading partners.  This is what he says:

In my recent post I shared my discovery of an apparent decline in the number of UK patent applications filed by UK companies.  This article provoked some stimulating debate and interesting comments, some of which is set out below.


The key trend can be understood with reference to the graph below, which shows the number of patent applications filed by UK applicants in the last ten years. 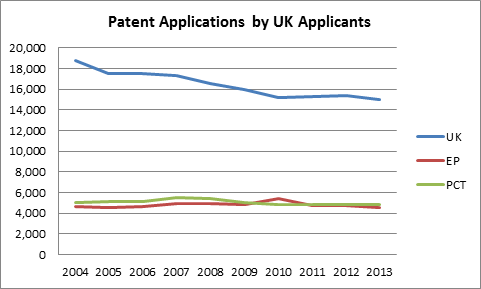 The reason for the decline is not immediately apparent, and it is likely that a number of factors will be influential.  It could be an interesting area of study to analyse the relevant applicants on a case-by-case basis and investigate the pressures causing a change in patent filing behaviour.  In the absence of this research we can only speculate on possible causes, and I provided a number of possibilities in my previous post.  Some contributors have suggested further possible explanations, which are outlined below.

Many practitioners will recall that Section 23 of the Patents Act 1977 was amended on 1 January 2005 as part of the Patents Act 2004.  The amendments relaxed the restrictions on filing patent applications abroad by UK residents.  Before 2005 all patent applications made by UK residents had to be filed first in the UK, or else a foreign filing licence was required.  In practice, foreign filing licences were rarely obtained because it was easier simply to file applications first in the UK and then file other applications if no secrecy order was issued within six weeks.

The relaxation of Section 23 of the Patents Act could have some influence on the reduction in the number of UK patent applications.  In particular, some applicants may file applications directly in the US and/or at the European Patent Office (EPO).  One advantage in filing early at the EPO is to receive an early European search.  However, other applicants may still prefer to file first in the UK in order to maximise the potential term of their European patents.

Some commenters have suggested that the reduction in UK patent filings could be related to a shrinking industrial base.  It is debatable whether this change in the UK economy has actually occurred in the period under consideration (2004-2013).  In addition, even if it has occurred then it fails to explain why the number of European and PCT applications has remained stable.  In my view, this suggestion cannot be a complete answer.

Another suggestion has been a change in focus in the UK economy from traditional industry towards software.  In this case one may not observe a shift in the technological areas in which patent applications are filed because of the difficulty in obtaining UK and European patent protection for software inventions.  It is certainly true that some of these inventions are filed as patent applications only in the US, especially since the amendments to Section 23 of the Act relax the requirement for filing first in the UK.

It has also been suggested that technology cycles are shorter in software industries, which drives up the cost of patent applications in relative terms, and therefore reduces their number.  This may be true, but the proliferation of software patents in the US demonstrates that there is still commercial value in protecting these types of invention. 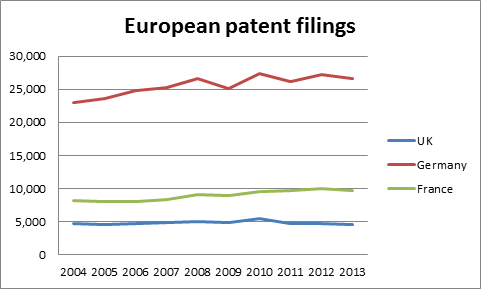 None of this seems like good news from a UK perspective.

This blogger suspects that the debate is far from over. For one thing, it might be worth taking a look at grants. If the overall figure for applications is continuing to slide but granted patents are on the increase or holding their own, for example, the decline might be attributable to better filtering out of likely unsuccessful application by the aspiring applicant's professional representative.  And while there are no handy statistics available, might it be that some British businesses -- anecdotally less averse to risk than some of their competitors elsewhere in Europe -- are viewing features such as first-to-market, strong trade mark protection or confidentiality as offering better returns on their investment of limited resources?
The Great British Vanishing Act Part 2: where has home-grown patent filing gone?

Reviewed by Jeremy on Wednesday, October 01, 2014 Rating: 5
The IPKat licenses the use of its blog posts under a Creative Commons Attribution-Non Commercial Licence.