BREAKING: CJEU Grand Chamber says what to consider in communication to the public cases 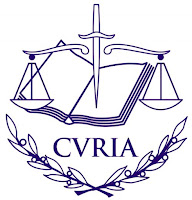 Back in February this blog reported that after hotels [here], dentist waiting rooms [here], and spas [here], the Court of Justice of the European Union (CJEU) had been asked to say whether the making available of TV broadcasts in rehabilitation centres should be regarded as an act of communication to the public.

The case is Reha Training, C-117/15, a reference for a preliminary ruling from the Landgericht Köln (Regional Court, Cologne) asking essentially whether [the questions in full can be accessed here]:
This reference was made in the context of litigation between Reha Training (which operates a rehabilitation centre) and German collective management organisation GEMA, concerning Reha Training's refusal to pay a licence fee in connection with the making available of protected works on its premises.

This morning the CJEU delivered its 67-paragraph judgment [just made available on the Curia website in a handful of languages, but not English - UPDATE on 1 June 2016: the judgment is now available in English], substantially confirming the Opinion of Advocate General (AG) Bot although not relying on the four elements indicated therein (see further below).

Quite interestingly the CJEU has decided this case as Grand Chamber [ie with 13 judges presided over by the Court President instead of the usual chambers of 3 or 5 judges]. The reason for this was [as the AG himself explained in his Opinion] to allow the Court to clarify its case law in the area of communication to the public.

1.    the existence of an ‘act of communication’ for which the role of the user is indispensable;
2.    the communication of a protected work to a ‘public’;
3.    the ‘new’ character of that public;
4.    and the ‘profit-making’ nature of the communication (according to the AG this is not however an essential condition).

The AG held the view that the notion of 'communication to the public' should be the same in relation to different directives, ie the InfoSoc and the Rental and Lending Rights Directives [both relevant in a case like this].

This said, he considered whether the four criteria above would be present in a situation like the one at stake before the referring court. He concluded that the case at hand is one in which the right of communication to the public is a stake.

First, in its decision the Court noted that application of Article 3(1) of the InfoSoc Directive is without prejudice to Article 8(2) of the Rental and Lending Rights Directive. Secondly, given the unity and consistency requirements of the EU legal order, the same concepts in different directives should have the same meaning [well, true in theory, but there have been recent instances in which the CJEU has not followed this very rigorously].

The Court highlighted that there are some differences between relevant provisions in the InfoSoc and Rental and Lending Rights directives. However, it concluded that there is no evidence that EU legislature intended the concepts of 'communication to the public' differently in these two pieces of legislation.

A broad interpretation and a number of criteria, some variable and some constant

This said, the Court held that in assessing the existence of a communication to the public, several criteria - each of which non-autonomous but rather interdependent in nature - should be considered. These criteria may come into consideration differently in different scenarios. What however seems the common element in all the various scenarios is that the concept of communication to the public must be interpreted broadly, further to Recital 23 in the preamble to the InfoSoc Directive.

In addition, the concept of 'communication to the public' combines two cumulative elements: (1) an 'act of communication'; (2) directed to a 'public':

(2) The term 'public' refers to an indeterminate number of potential recipients, and also implies a fairly large number of people (ie above de minimis). In addition, according to the Court to fall within the concept of 'communication to the public' a work must be directed to a 'new public", ie an audience that was not taken into account by the relevant rightholder when he authorised the initial communication of the work. In this context, it is necessary to take into consideration the indispensable role of the user [eg the operators of a coffee shop, hotel, or spa], who must provide, in full knowledge of the consequences of his behavior, access to the work to a 'new public'.

Although in some cases the profit-making nature (or its lack thereof) of the act in question has been taken into account, the Court clarified that this is not a decisive factor to classify an act as one of communication to the public [it might not be decisive but certainly it is interesting, as the Court itself subsequently referred to it at para 63].

The case of rehabilitation centres

Having clarified what criteria need to be taken into account to determine whether a certain act is to be regarded as one of communication to the public, the CJEU considered that the case at hand is more akin to that of a hotel operator rather than a dentist.

It held that:
Implications of the decision

This decision is a very important one and it will be interesting to read the English version once it becomes available [this blog post has been written by relying on the French version].

First, it seems that the CJEU has embraced the 'new public' criterion fully.

Readers may remember that in its 2013 TV Catchup decision [here] the Court rejected TV Catchup’s contention that for Article 3(1) of the InfoSoc Directive to apply the communication must be directed to a ‘new public’. According to the Court the ‘new public’ criterion would be only relevant when the technical means are identical. This is not the case (as it was in TV Catchup) of works transmitted via territorial broadcasts and then retransmitted over the internet.

It would now appear that 'new public' considerations might become relevant in a higher number of cases, ie those  in which the transmission and retransmission occur through different technical means.

Secondly, another key aspect is that the CJEU appears to require for an act of communication to occur something more than the mere possibility to access a work (Svensson), ie its transmission.

This could be useful for the CJEU to consider when it decides the key case currently pending before it, ie GS Media [as readers will know, this is a reference for a preliminary ruling from the Dutch Supreme Court. It was made in the context of proceedings between Sanoma (the publisher of Playboy magazine) and GS Media, concerning the publication by the latter on a website (GeenSijl) that it operates of hyperlinks to other websites hosting unpublished photographs taken for a forthcoming issue of Playboy].

In particular, it could be useful to side (if the Court wants to obviously) with Advocate General (AG) Wathelet who, in his Opinion on 7 April last [here], considered that in Svensson the CJEU held that for there to be an ‘act of communication’, it is sufficient that a work is made available to a public in such a way that the persons forming that public may access it, irrespective of whether they avail themselves of that opportunity.

According to the AG this approach is not correct in relation to hyperlinks, because hyperlinks that lead, even directly, to protected works do not ‘make available’ those works to a public where the works are already freely accessible on another website, but merely facilitate the finding of those works. According to the AG what is key to consider is rather whether the intervention of the ‘hyperlinker’ is vital or indispensable in order to benefit from or enjoy works.
BREAKING: CJEU Grand Chamber says what to consider in communication to the public cases

Reviewed by Eleonora Rosati on Tuesday, May 31, 2016 Rating: 5
The IPKat licenses the use of its blog posts under a Creative Commons Attribution-Non Commercial Licence.