Book review & discount code: A History of IP in 50 Objects

Hayleigh Bosher Thursday, July 11, 2019 - #IPKat, Book review, discount, Hayleigh Bosher, history of IP
A lot of books pass this keen-reading-Kat’s desk, but this one is a show stopper. I present to you A History of Intellectual Property in 50 Objects. This book is a master piece and I express my gratitude and awe to the editors – Claudy Op Den Kamp and Dan Hunter – for what must have been the Everest of editorial work, so wonderfully tying together 50 contributions into a story that demonstrates the importance of IP. It shows how IP has developed within human history, its influence on history and the development of technology, and vice-versa. 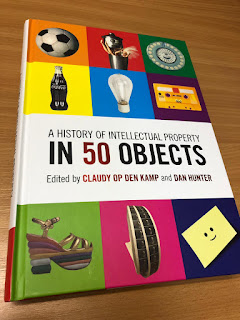 The book is organised into five ages, which are conveniently colour-coded, eloquently titled The Pre-Modern Age, The Age of Invention, The Modern Times, The Consumption Age, and The Digital Now.

The Pre-Modern Age includes the likes of Mona Lisa and the Tempesta map of Rome. Did you know that Antonio Tempesta and his map was such an important waypoint in the development of copyright and IP? Jane Ginsburg explains that over 400 years later, many of Tempesta’s claims for exclusive rights continue to underlie authors’ aspirations for the modern copyright system.

The Age of Invention covers objects such as the corset, the lightbulb, kodak camera and paper print. In this section Lionel Bently tells the story of the Singer sewing machine, which he says "together with its significance to the creation of the doctrine of genericide and to our understanding of patent pools, it is probably fair to say that no one object has been as centta lto the evolution of our modern IP system."

The Modern Times includes Champagne, Steamboat Willie, Aspirin and the first technology for mechanical reproduction of music...the player piano roll. Maurizio Borghi tells the story of the success of the player piano roll, that was partly due to the lack of enforceable IP rights in the music, setting the scene for the beginning of the conflict over the control of music that continues today.

The Consumption Age includes objects from the oral contraceptive pill to a football, with everything from the photocopier, the barbie doll and lego brick in between, as well as the Chanel 2.55 handbag. Jeannine Suk Gersen reveals how Coco Chanel made her business comeback in the 1950s, after becoming a secret agent for the Germans during the war and attempting to exclude her Jewish business partner and backer Pierrer Wertheimer from his rights to the Chanel No.5 perfume empire.

Finally, The Digital Now, brings us up to date with 3D printing, Wi-Fi router, and Bitcoin. Stavroula Karapapa's contribution tells the unsuspecting story of the Post-It note – a powerful idea brought to fruition by accident… a compilation of ideas and hard work that followed an initial experiment that failed, taking around 10 years from discovery of the adhesive to its application in the repositionable note. Following on from the genericide of the Singer Sewing Machine, Post-It is also one of those brand names that has replaced the product name [one of my favourite games e.g. JetSki, Hoover, Sellotape, Rizler, PingPong, Grundon, Chap Stick, Jacuzzi, Polaroid, Google, I could go on...]. Object number 42, Megan Carpenter explains, also met the same fate, in 1950 when its competitor successfully petitioned the US Patent and Trademark Office to cancel the mark Escalator!

Each contribution is presented as a compelling short story accompanied with pictures, bringing in classic IP themes that would facinate IP experts whilst being accessible and intriguing to the general audience. At the start of each story a timeline identifies the objects place in history, with key information identified at the top of the page and suggested further reading at the end. Each entry is between 7 and 16 pages, and the book runs to 429 pages. It is truly a joy to read from cover to cover or randomly diving in. It has a beautiful finish, with glossy pages and many pictures, it feels like a real celebration of IP!

In the introduction, it is explained that the title is “A History of IP” rather than “The History...” [did they consider 50 Shades of IP though?], recognising that these are partial histories born in the Western philosophical tradition that is, for instance, only now beginning to come to terms with its colonial heritage. Whilst the book is by no means exhaustive and we could probably all think of additional objects, it has been carefully thought-through. The acknowledgements mention several preparatory roundtables over the course of several years with a long list of contributors, and it shows.

The contributors are essentially a list of the good and the great in IP from across the world, you can see the full list here, who draw not only on their legal knowledge, but also from history, sociality, media, horticulture, science and tech. [Wondering if episode 2 of this book might be A history of IP in 50 people?!]

This book is a homage to IP and should be in the offices and on the coffee tables of every IP enthusiast, legal, academic, creator, innovator or otherwise. So essentially that’s all our readers. Luckily, Cambridge University Press have kindly provided 20% discount code KAMP2019 that can be redeemed at checkout on Cambridge.org

In case readers might think I am being a little over-enthusiastic, take a look at the back cover where you will see that Robin Jacob describes it as “delicious” and Lawrence Lessig exclaims “Wow, what a book!” What. A. Book. Indeed!

Reviewed by Hayleigh Bosher on Thursday, July 11, 2019 Rating: 5
The IPKat licenses the use of its blog posts under a Creative Commons Attribution-Non Commercial Licence.