The One Emoji We All Need

This Kat instantly liked the facepalm emoji when it was first released in 2016. It felt like some hidden inner voice was speaking out, echoing in her own ears. It had been something that had been missing for some time – an expression of frustration or embarrassment at the difficulties of a tough situation:

‘The iPhone is finally getting a facepalm emoji’ -- Telegraph

‘Apple gives the world what it needs, a facepalm emoji’ -- mashable

‘The One Emoji You've All Been Waiting For Is FINALLY Coming To Your Phone...’ -- popbuzz

Darwin (unusual citation alert) once said the following about the universal nature of expressions: ‘the young and the old of widely different races, both with man and animals, express the same state of mind by the same movements’. So true.

By now, according to emojipedia.org, there have been several graphic variants of the facepalm emoji available on major social media platforms: 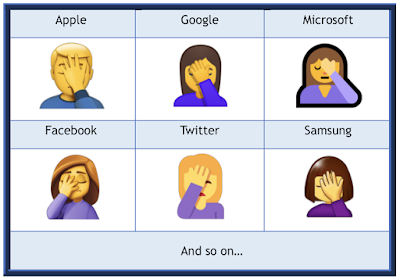 Compared to the picture above, the Chinese facepalm emoji is a bit unique. It is inspired by a movie character played by Mr Xingchi Zhou, the master of comedy in China (see below). This emoji will be referred to as ‘smiling facepalm’ from this point on. 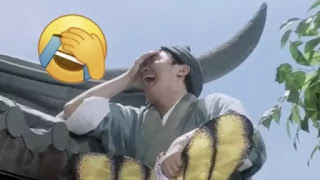 The smiling facepalm was designed by Tencent for its blockbuster platform WeChat (an instant messaging app comparable to WhatsApp) in 2016, with four sequential revisions:

This wonderful emoji is rich in connotation. It conveys discomfiture and awkwardness, but with the touch of a humorous seek-joy-amidst-hardship sentiment. Isn’t it great to ‘smiling facepalm’ someone in those ‘😫/😡/🤦/🤬’ situations? Although it expresses some emotions of dissatisfaction, the smile lightens the social tension. Because of its uniqueness and practicability, this all-purpose emoji has rapidly become one of the best-loved and most widely used emojis in China.

On 21 November 2017, Zhaoping Jin (‘Jin’) filed a trade mark application for ‘smiling facepalm’ in China (see below) for merchandise such as shirts, baby clothing, scarves and hats in class 25.
Following a preliminary examination, Jin’s application went into a notice period on 13 August 2018, which sparked an outcry of IPR infringement and squatting in the Chinese IP community.

Jin disagreed with the criticism. In an interview, he said that, as the owner of a clothing-trading company, he has always sought trade mark protection for the patterns printed on the clothes by his company. As to the facepalm pattern, he had been using it on his products for almost two years, and therefore thought he should protect it as a trade mark to prevent future trade mark squatting on rivals’ clothing products. Pressed by the reporter on whether he had known Tencent was in possession of the said emoji, Jin replied, ‘This emoji was not so popular when I started using it’. In addition, since he had only applied for the goods in class 25, he believed it ‘would not be precluding Tencent (the owner of WeChat), or the netizens and WeChat users, from using the facepalm emoji’.

Tencent filed a notice of opposition to the Trade Mark Office (‘TMO’). Jin’s application was rejected because of its infringement upon Tencent’s prior copyright.

Article 32 of the Trade Mark Law of China:
No applicant for trade mark application may infringe upon another person's existing prior rights, nor may he, by illegitimate means, rush to register a trade mark that is already in use by another person and has certain influence.

The case is not complicated, yet this Kat finds it a little bit annoying. Statistics show that by 2018, WeChat had had 889 million users. Who would have thought that anyone other than Tencent could even try to register as a trade mark such a widely used emoji?

Tencent got involved in the dispute passively. According to the Trade Mark Law of China, prior rights, such as copyrights, do not raise the TMO’s ex officio examination. Thus, the holder of prior rights or the interested party must take initiatives by themselves to start the inter partes proceeding, which costs time and money. This is not a problem but rather a common practice in many other jurisdictions as well.

Many hold that there is an inadequacy in the current Chinese legal framework, which, during administrative procedures, is incapable of providing a direct basis for the ‘winning’ party to get monetary awards for their costs. The infringers, whether intentional or unintentional, only need to pay very little cost to seek private gain.

Despite that the right holders may bring a separate civil action in the courts, the related cost rises substantially at the same time -- 🤷🏻‍♀️
The facepalm trade mark case in China

Reviewed by Tian Lu on Wednesday, September 04, 2019 Rating: 5
The IPKat licenses the use of its blog posts under a Creative Commons Attribution-Non Commercial Licence.