The fundamentals of trademark infringement in relation to traditional keyword advertising in the EU have largely been settled. However, more complex and increasingly common types of search engine advertising, such as comparison-shopping ads, have largely escaped the attention of the courts. This post explores how the German courts might treat Google’s PLAs subsequent to the Federal Court’s decisions in the Ortlieb dispute.

Many a reader will doubtless have noticed Product Listing Ads (PLAs) in Google search results. These ads, normally displayed at the top of the search results page, consist of a product image and price, together with minimal text. By way of illustration, the image below shows some of the PLAs displayed when searching for “Sneakers”. [Kat readers alert: the word “Sneaker” could just as well be a trademark or brand name/span.] 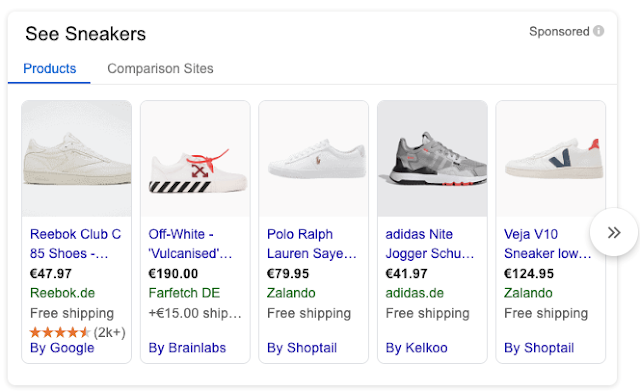 While PLAs may seem akin to Google AdWords in that both are triggered by search terms, they are fundamentally different in their manner of operation. In AdWords, the advertiser selects keywords, bidding for them in auctions together with other interested advertisers. In PLAs, it is Google’s algorithm that chooses “relevant” keywords, based on the product description and prior user behaviour.

This raises the question of where liability lies with regards to possible trademark infringement resulting from PLAs. Google and other keyword advertising providers have, since the CJEU’s decision in Google France and Google (C-236/08, C-238/08), been protected by virtue of their status as neutral intermediaries. Can this status be maintained where the provider no longer merely gives advertisers the opportunity of using a competitor's trademark as a keyword, but actively makes this choice on their behalf via algorithms?

The recent decisions of the German Federal Court in the Ortlieb cases suggest that the German courts could conceivably hold Google liable for the use of third-party trademarks to trigger the display of PLAs. The Ortlieb cases arose out of a dispute between Ortlieb Sportartikel GmbH, a mid-sized German sport equipment manufacturer, and Amazon, concerning the search results for “ortlieb” on Amazon.de. Amazon employs a search algorithm that generates results based not only on text matches in product descriptions, but also prior customer behaviour.

When a potential customer searches for “ortlieb” on Amazon, they are presented with an undifferentiated list containing both Ortlieb and third-party products. Amazon’s search algorithm would thus appear to be functionally similar in principle to the “broad match” algorithm employed by Google for PLAs.

Ortlieb brought a claim against Amazon alleging that the display of third-party products in the search result list for their trademark constituted trademark infringement. While the Munich Higher Regional Court had distinguished search results on e-commerce platforms from keyword advertising, in Ortlieb I (15.02.2018, I ZR 138/16) the Federal Court held that product listings displayed in response to searches with a search term identical to a trademark must be assessed under the same legal standard as AdWords and in accordance with the Court’s two-part keyword advertising test:

1) Can the consumer distinguish third party advertising from the trademarked search term on the basis of general knowledge, or

2) Does the design of the third-party advertising make it sufficiently clear that it is not related to the trademarked search term?

The Court also held that the commercial user of that trademark is the party that selects which listings are displayed. Consequently, where this choice is made by an algorithm operated and controlled by a platform, liability for infringement lies with the platform. Given that the search terms triggering Google’s PLAs would appear to be determined in a functionally similar way by a Google-operated algorithm, the reasoning of the Federal Court could conceivably be equally applicable to them as well.

While the Federal Court’s keyword advertising test is dependent on the specific trademark and ad in question, Ortlieb II (25.07.2019, I ZR 29/18) suggests that the manner in which Google displays PLAs might render them particularly prone to infringement. There, the Federal Court clarified that infringement is likely to occur where consumers are primed into expecting that only products related to the trademark search term will be displayed.

The case concerned AdWord ads purchased by Amazon.de inviting consumers to look for Ortlieb bags and other apparel on Amazon (the picture below of one of the ads is taken from the Court judgement):

The Federal Court agreed with the Munich Higher Regional Court in finding that because the AdWords ad referred exclusively to Ortlieb, it gave rise to the expectation that, by clicking on the ad, consumers would see Ortlieb products exclusively. This expectation was dashed when the consumer then reached the search result list for “Ortlieb” on Amazon.de, containing both Ortlieb and third-party products.

One might query whether this result might be problematic for PLAs as well, since the ads that appear after searching for a particular trademark are displayed under the caption “See (trademark)”. Although the PLAs displayed are usually exact matches for the brand, this is not always the case.

Based on the foregoing, it can be argued that the circumstances of a PLA might be broadly analogous with the facts in Ortlieb II, as in each case, both goods corresponding to the trademark, as well as third-party goods not connected with the trademark, are displayed under the trademark caption. Indeed, in PLAs, the link between the ads and the trademark might be more pronounced, because the ads appear directly under the “See (trademark)” caption.

PLAs were not at issue in the Ortlieb cases and have yet to face scrutiny by the German courts. However, one can contemplate a result, based on the Ortlieb cases, whereby Google might eventually be forced to amend such ads, as currently displayed, so as to remove the caption repeating the search term. In any event, since Google’s trademark policy currently does not allow complaints regarding PLAs, might their policy need to be modified in light of developments in the case law.

Reviewed by Neil Wilkof on Tuesday, January 07, 2020 Rating: 5
The IPKat licenses the use of its blog posts under a Creative Commons Attribution-Non Commercial Licence.