Another British success in China

No, it's not the Olympics, but rather the news in the Scotsman that the Scotch Whisky Association has succeeded in gaining geographical indication protection in China for the term 'Scotch Whisky'. China imports 17 million bottles of Scotch a year.
The IPKat is too busy celebrating this Scottish triumph in traditional fashion to comment.

The LA Times reports that Stephanie Lenz, a mother who posted a clip of her baby dancing to the artist formerly known as the artist formerly known as Prince's song, 'Let's Go Crazy' has won the first stage of her battle against Universal Music (see earlier IPKat post here). Ms Lenz's clip was removed from YouTube after the site received a takedown notice under the Digital Millennium Copyright Act from Universal, the holder of the copyright in the song. The clip was reinstated after a month, but Lenz sued under the DMCA, pointing to the requirement therein that copyright owners can only demand the taking down of a work if they have "a good faith belief that use of the material in the manner complained of i 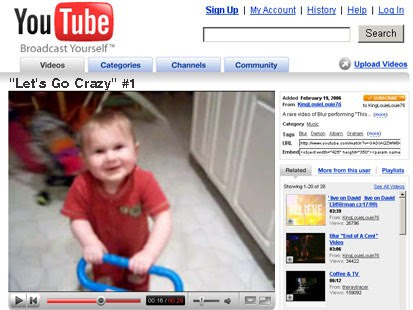 s not authorized by the copyright owner, its agent, or the law."

Universal argued that copyright holders, in making this assessment, did not need to take into account whether the use made by the subject of the notice was fair use, since fair use is a defence, rather than a legal right. Not so, according to Judge Jeremy Fogel, who states:

"Even if Universal is correct that fair use only excuses infringement, the fact remains that fair use is a lawful use of a copyright. Accordingly, in order for a copyright owner to proceed under the DMCA with “a good-faith belief that use of the material in the manner complained of is not authorized by the copyright owner, its agent or the law,” the owner must evaluate whether the material makes fair use of the copyright. 17 U.S.C. § 512(c)(3)(A)(v)."

However, he went on the conclude that Lenz was unlikely to win the case at full trial as she would need to show subjective bad faith on the part of Universal, i.e. that when it issued the takedown notice, it knew it was making a groundless threat of infringement.

The LA Times observes that the need to evaluate fair use will make it difficult for copyright owners to use automated 'bots to root out works which borrow from copyright works and issue take down notices ('bots can't evaluate whether use is fair).

The IPKat reckons that this is a good decision. On the whole, copyright owners are likely to be in a better position to evaluate fair use than individuals who post materials, and hosting sites, if forced to evaluate fair use may take a risk-averse strategy that would prevent them from allowing many socially useful works. The IPKat reckons that unless copyright owners are forced to evaluate fair use, many works which constitute fair uses will just disappear if made the subject of take-down notices since only exceptional individuals like Ms Lenz will persevere in getting their work reinstated.
Gold in China; Mother wins round 1 of YouTube dancing baby case Reviewed by Unknown on Thursday, August 21, 2008 Rating: 5
The IPKat licenses the use of its blog posts under a Creative Commons Attribution-Non Commercial Licence.