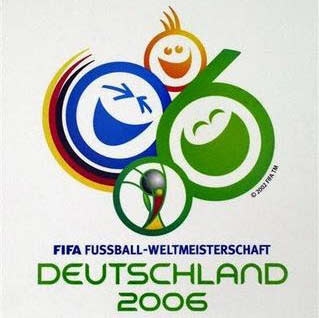 If you looked at the Board of Appeal decisions on the OHIM website, as the IPKat did just now, you will have noticed that there are no decisions dated between 19 June and 23 June 2008. This is slightly odd, because the Kat has in his possession a series of five extremely interesting decisions of the Board, all of which are dated 20 June 2008.

Right: Fifa's excellent figurative Community trade mark, which -- unlike the word marks listed below -- was not under threat in these proceedings

The five marks in dispute are not hugely current any more in terms of their commercial value, since they relate to an event which briefly obsessed a large proportion of sports fans. They are

The grounds upon which the registrations were challenged was that the signs in question were descriptive and lacked distinctive character. The Cancellation Division presumably felt confident that this was not so, but the Board of Appeal, annulling all five of its decisions in rulings of 30-odd pages in length, thought otherwise.

The IPKat congratulates the Board of Appeal for having the courage (i) to refuse the request to convene a Grand Board to hear these cases, since they raised no issue of legal difficulty and (ii) to apply Community trade mark law as it stands, fairly and impartially, in the face of some pretty vigorous assertions from the Community trade mark proprietor.

Merpel says, what I find interesting is the wide range of goods and services for which Fifa sought protection of their marks. I wasn't expecting to find any of these on the list:

Both Kats agree that the real importance of these decisions lies not in these marks but in the message that organisers of sports events in the future will be receiving. If GERMANY 2008 does not meet the criteria for valid registration, will LONDON 2012, for example, fare any better?
Ferrero 5 Fifa 0 -- but will there be a replay?

Reviewed by Jeremy on Wednesday, August 13, 2008 Rating: 5
The IPKat licenses the use of its blog posts under a Creative Commons Attribution-Non Commercial Licence.