Last weekend, as the AmeriKat was sorting through five years of accumulated belongings in preparation for a move, she came across old notes from her first year in law school. Brightly multicoloured, underlined, boxed and highlighted, these notes were a relic of the bygone era when the most challenging of events was making it to a 9am Jurisprudence lecture.
Quick Patent Picks
* Another relic of a bygone era, Western Union, victoriously survived a 2007 patent lawsuit last week when a Texas federal jury awarded them $16.5 million after MoneyGram International’s “FormFree” system infringed Western Union’s patented “Money Transfer By Phone” service. Both services involved the initializing of money transfers via telephone call centres with the transactions being completed at agent locations. Despite Western Union’s own technical expert testifying that the two systems were sufficiently different, the federal jury upheld the validity and infringement of Western Union’s patent. Lynda Michielutt, a spokesperson for MoneyGram, stated that “[w]e firmly believe that the case is without merit, and we believe we have a solid basis for appeal.”

* WhoGlue Inc., a small Baltimore tech company, filed a patent infringement law suit last Monday in the US District Court for Delaware against Facebook for infringement of a 2001 patent for “facilitating communications between user members of an online network.” WhoGlue’s patent filing predates Facebook's creation in 2004 and the Baltimore company received its patent in July 2007. Facebook spokeswoman Elizabeth Linder stated that “[w]e see no merit in this suit, and we will fight it vigorously.” Having looked at the patent filing, the AmeriKat is tempted to agree with Linder.

* The appeal in i4i v Microsoft was heard this Wednesday before a three-judge panel in the U.S. Court of Appeals for the Federal Circuit. Judge Moore questioned the $290 million damages calculation made by a Texas jury against Microsoft. As reported by the IPKat, Microsoft argued that the damages overestimated the actual worth of i4i’s patent to Microsoft’s programs. Judge Moore agreed: “Not everyone who is willing to pay $90 or $200 for a product is willing to pay $500.” However, a settlement is apparently not out of the realm of possibility following a statement from i4i’s chairman Owen Loudon: “You can never say never, but we’re here to build our business and we’re here to compete”.

In 2005 when eBay purchased Skype for $2.6 billion they did not acquire Joltid, the company which supplied the integral technology necessary to operate the program. Joltid is also owned by the founders who originally sold Skype to eBay. As a result of being unable to further commercialize the VoIP software on their website applications, eBay sold its majority stake for $1.9 billion to private investors. Two weeks ago, Skype and Joltid’s founders sued eBay for copyright infringement of Skype’s so called “global index” technology which is used to route calls via the internet. eBay was a licensee of Joltid’s technology until March 2009, when Joltid terminated the licence. Skype also named the private investors as defendants to the suit. Similar litigation has been continuing in the UK. According to the Washington Post, “Skype did not own the core peer-to-peer technology underlying the service, nor did they even have access to it”, so even if eBay had wanted further commercialize and develop the Skype product, they allegedly did not have the source code to do so. The AmeriKat thinks some good IP due diligence may have saved the investors from changing money so quickly.

Back to the drafting table, Google!
It does not seem to be a true Letter from AmeriKat unless there is something about the Google Book Settlement, and this week is no different. District Judge Denny Chin postponed the fairness hearing originally scheduled for 7 October 2009 to allow the parties to redraft the settlement. Judge Chin’s order stated:

A status conference will instead be held on that date. 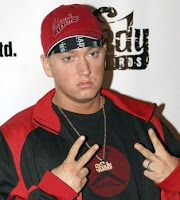 Eminem Bites the Apple
Back in 2005 Eminem’s company Eight Mile Style filed a multi-million dollar law suit against Apple, alleging that the company had infringed the rapper’s copyright in selling 93 of his tracks through iTunes without permission. Apple’s agreement with Aftermath Records is argued by Eminem not to have included digital downloads. The lawsuit alleged that Apple made $2.5 million from selling these tracks. In opening statements last Thursday, Apple’s counsel Glenn Pomerantz told the court that “[n]owhere does it say only compact discs. Nowhere does it say ... not digital downloads." The trial continues.
Letter from AmeriKat

Reviewed by Annsley Merelle Ward on Monday, September 28, 2009 Rating: 5
The IPKat licenses the use of its blog posts under a Creative Commons Attribution-Non Commercial Licence.