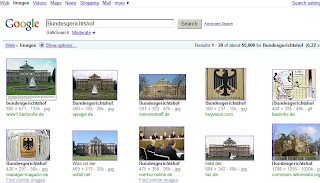 While Google had a bit of bad press in Germany over the last week or so due to it collecting publicly available (!) W-LAN data for its Google Street View product, the search engine provider will be pleased with the German Federal Supreme Court (Bundesgerichtshof, BGH) decision of today's date holding that Google's image search does not amount to copyright infringement (case reference I ZR 69/08 – Vorschaubilder of 29 April 2010). Please find below this Kat's translation and summary of the BGH's press release of today's date.

The first civil senate of the BGH, which is inter alia responsible for copyright matters, has today decided that Google is not liable for copyright infringement where copyright protected works are displayed as preview pictures (thumbnails) in Google's image search results.

Google's Internet search engine includes a text driven image search function which allows users by using search terms to search for images, which third parties have published on the Internet in connection with the search term. The images revealed by the search engine are displayed in the search results as scaled down preview pictures (so-called thumbnails) which have a smaller pixel size than the images shown on the original website. The preview pictures include a link which allows the user to access the website which displays the original photo. To shorten the search process, Google searches the Internet in regular intervals for images and then stores these images on its own servers. This makes it possible that a search result including such preview pictures can be displayed promptly after an Internet user conducts a Google image search using a search term.

The claimant in the proceedings is an artist who maintains a website which displays her own works. She complained that Google had displayed her works as thumbnails whenever her name had been entered as a search term into Google's search engine.

The lower instance courts decided in Google's favour. While the appeal court found that Google was infringing the claimant's copyright in her works, it nonetheless found that the artist's claim was an abuse of rights under Article 242 German Civil Code (BGB). On further appeal the BGH also decided in Google's favour. The BGH went one step further than the court of appeal and took the view that Google did not even infringe the artist's copyright. The BGH agreed with the court of appeal that the claimant had neither made an express nor an implied legal declaration ("rechtsgeschäftliche Erklärung") in which she had authorised Google's use of her works as preview pictures via Google's image search. However, the BGH held that the reproduction of the images as preview pictures, while encroaching on the artist's right of presentation of her works under Article 19a German Copyright Act (UrhG), was nonetheless not unlawful ("rechtswidrig") because the defendant (Google) could interpret the claimant's actions (even without a legal declaration) as consent to the display of her works in Google's image search results. The court came to this conclusion since the claimant had made the content of her website accessible to search engines and had not made use of the technical possibilities available to her that would have allowed her to except her works from being searched and displayed by search engine providers.

For those cases where the images found and displayed by a search engine had been posted by unauthorised third parties, the BGH referred to the ECJ's recent guidance in its AdWord decisions in Google France/Louis Vuitton (23 March 2010, C-236/08 - C-238/08, para. 106 pp) where the ECJ had held that the liability of a referencing service provider, such as Google, may be limited under the E-Commerce Directive 2000/31. In light of the ECJ's guidance, the BGH ruled that a search engine provider may only be liable (for copyright infringement) once it had obtained knowledge of the unlawful nature of the data it had stored (IPKat addition: and then did not act expeditiously to remove or to disable access to that data).

This is certainly a good day for Google in Germany. At the same time, this decision may serve as a reminder to website owners to learn more about the technical possibilities available to them to protect the content of and images displayed on their websites, even though the court seems to ask for quite a lot here. Does everyone who has his own website know how to work with meta-tags etc? Can you really ask owners of websites to actively engage themselves in preventing search engines from accessing their content?

After its decision in the Beta Layout AdWord case last year (see the IPKat's report here), where the BGH had taken the view that the average internet user was rather technology savvy and familiar with Google's layout and search functions, the BGH has yet again adopted a technology friendly approach. Having said that, this Kat is very interested to see the full decision and in particular the court's arguments. I cannot help but thinking that the BGH has adopted a very broad definition of consent here. It remains to be seen how this decision will sit within the wider context of personality right and data protection laws.

To read the BGH's press release in its German entirety, please click here.

Reviewed by Birgit Clark on Thursday, April 29, 2010 Rating: 5
The IPKat licenses the use of its blog posts under a Creative Commons Attribution-Non Commercial Licence.