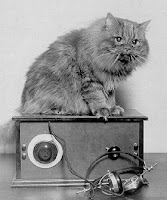 While everyone else in the UK had their ears pressed to the radio, listening to the exciting news that a General Election had been called, the IPKat's friend Giles (Browne Jacobson) was scanning the airwaves for sounds of intellectual property news -- and this is what he found. It's a feature on Material World ("In a landmark ruling this week, a New York court judge has declared that several patents for a genetic cancer test are not valid. The finding comes after years of argument over the rights and wrongs of patenting disease genes, with objectors arguing that patents limit free inquiry, supporters insisting that fair rewards promote continued research. ... Quentin Cooper will be hearing about the significance of the court case, and hearing what the evidence is either way in the debate"). Thanks, Giles!

Two IP blogs associated with Aurelio Lopez -- IP Tango and Lvcentinvs-- are sponsoring a seminar, "Intellectual Property Provisions of Free Trade Agreements with Latin American countries", which is taking place within the framework of the Magister Lvcentinvs IP Masters programme at the University of Alicante on 3 May 2010. The seminar will be held in Spanish. Speakers include Patricia Covarrubia, Aurelio himself and Ricardo Antequera Parilli (Antequera Parilli Abogados, Venezuela). Anyone willing to participate in the seminar (free of charge) is invited to read the information here.

Another blog that deserves a little pat on the back -- if it's wise to pat lions, that is, is Afro-IP, the specialist IP blog for Africa which has been quietly ticking along for the past couple of years and has just notched up its 400th email subscriber. Well done, everyone!
Wednesday whimsies -- a little late

Reviewed by Jeremy on Thursday, April 08, 2010 Rating: 5
The IPKat licenses the use of its blog posts under a Creative Commons Attribution-Non Commercial Licence.