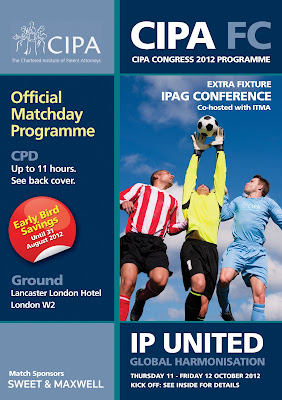 The Chartered Institute of Patent Attorneys (CIPA), ever mindful of the need to attract interest and move with the times, has crafted this magnificent programme cover for its forthcoming Congress on 11 and 12 October.  This Kat can confirm that the event will be brilliant, since he has found himself, for reasons that cannot be fathomed, on the CIPA Committee which plans this annual event.  If the Congress is even half as entertaining as the Committee meetings -- particularly those delicious asides and snippets of repartee that unaccountably never make the Minutes -- it should be a rewarding experience for all who register.  Those whose aversion to football is based on a deep dislike of the technical terms in which its practitioners address one other will be relieved to know that John Terry is not among this year's keynote speakers, though Merpel suspects that no footballer ever called an adversary a **** ***** *** in the heat of the moment with as much venom as is found in the mouths of lawyers when addressing members of an opposing legal team with expressions such as "with respect", "with great respect" and, worst of all, "with the greatest respect".  But enough of this: the CIPA Congress website can be found here.


Around the weblogs. Thursday 12 July was Canada Fair Dealing Day, with no fewer than five carefully-thought-out Supreme Court of Canada decisions on that controversial but vital defence to an action for copyright infringement. Blogger Barry Sookman wasted no time posting on them; nor did Michael Geist or Howard Knopf of Excess Copyright fame. Meanwhile, perhaps with less haste but more elegance, IP Address blogger Lorraine Fleck is producing a set of bespoke posts, one per ruling, which she has kindly agreed to share with the 1709 Blog (you can read the first of Fleck's Five here).  Over on the jiplp weblog, news that the August issue of the Journal of Intellectual Property Law & Practice has just been published is accompanied by the full text of the Editorial on IP and commoditisation.


The IPKat is sure that it's nothing to do with the fact that the Swiss are the host nation for the World Intellectual Property Organization (WIPO), but the WIPO Global Innovation Index 2012 lists Switzerland as the top country for IP innovation.  The report -- which has been released jointly by WIPO and INSEAD ("The Business School of the World") -- also gives honourable mentions to Sweden and Singapore.  The message here seems to be that, if your country starts with an "S", there's hope for you yet.  Good news for Spain, says the IPKat.  Scotland too, mutters Merpel. It should be recorded that, however miserable and hopeless it feels to be living in the British Isles, both the United Kingdom and Ireland are listed in the Top Ten, at 5 and 9 respectively.


But that's not all. There's also a Global Innovation Efficiency Index, with China and India right at the very top and in third place -- wait for it -- the Republic of Moldova lying third and the Maltese breathing down their necks in fourth place.  Paraguay, Serbia and Estonia feature in the Top Ten of this list.  It's a little reminiscent of the Olympics, where there's generally an event or two at which one of the little countries manages to pick up a medal ...

Fancy a PIP? There's a Promoting Intellectual Property ('PIP') competition running in India, which has some impressive judges and, more importantly in this Kat's view, the blessing of his cousins on the Spicy IP weblog. Why fritter away the summer, sunning yourself on the beach (or, if you're English, why fritter away the summer taking shelter from the rain, still more rain and the Olympics) when you can win fame, fortune and a generous allocation of rupees?  So, if you're a graduate student and want to write something for submission not later than 1 October, click here.

Love them or loathe them, UK collecting society PRS for Music and cyber-tentacled Google are always up to something of note. This time, they've published a jointly commissioned data-driven research study into online copyright infringement -- a subject from which, a cynic might comment, PRS for Music suffers but Google benefits. Here's the link to the report, which takes a good look at six business models behind copyright infringement. Unsurprisingly the report makes no policy recommendations ...

Lacking prehensile thumbs, a strong sense of order and a sufficient degree of patience, this Kat is no enthusiast when it comes to loose-leaf publications.  In fact, he finds it hard to credit the fact that they are still in existence in what he thinks must be the fourth decade of mass computerisation of legal information.  However, there are those who are otherwise inclined.  Along with people who forswear the elastic and knot their own bow-ties, there are those who forswear instant online access and plunge for the paper.  If you are one such person and happen to subscribe to Sweet & Maxwell's loose-leaf European Patent Decisions, you should by now have received Release 39, dated June 2012.
Friday Fantasies

Reviewed by Jeremy on Friday, July 13, 2012 Rating: 5
The IPKat licenses the use of its blog posts under a Creative Commons Attribution-Non Commercial Licence.