Every little hurts, as Tesco Clubcard applications hit the wall

Jeremy Friday, December 13, 2013 - Jeremy Phillips, Trade mark registrability, United Kingdom
Giant supermarket chain Tesco got an oblique mention in this recent post on the comparative advertising and trade mark infringement spat between Aldi and Dunnes Stores in Ireland, but this remarkably successful business has the limelight all to itself this time round, in the context of Clubcard Trade Mark Applications, these being decisions O-451-13 and O-450-13 of the UK's Intellectual Property Office handed down on 8 November which did not for once go Tesco's way.  This post from guest blogger Rebecca Gulbul explains:


"The Intellectual Property Office (IPO) has recently rejected two trade mark applications by Tesco Stores Limited as being devoid of any distinctive character as per section 3(1)(b) of the Trade Marks Act 1994 and therefore incapable of being registered.  Mrs Linda Smith, a Hearing Officer from the IPO, has now issued her written decisions, explaining why these applications failed, following an ex parte hearing way back on 23 November 2012.

In its two applications, both in 2011, Tesco sought to register both the word Clubcard and its stylised form (right) as trade marks for goods and services in Classes 9, 16, 35, 36, 39, 41 and 43, including customer loyalty schemes. The IPO's examination reports raised objections that the marks were devoid of any distinctive character: it was said that the term Clubcard was already commonly being used by third parties and, as such, was not exclusive to Tesco and could not therefore be indicative of trade origin. Tesco requested an ex parte hearing so that it could argue its case for registration.

Tesco argued that the mark Clubcard had been extensively used since 1995, providing evidence of use through sales figures, number of active members in the scheme and various exhibits which included leaflets providing information on the scheme, copies of Clubcard statements, and Tesco’s wine and food magazine that publicised the Clubcard.

Said Tesco, being one of the largest organisations in the UK providing such a loyalty scheme and using the term Clubcard, it had acquired distinctiveness through use. It also suggested that the fact that other people had been using the mark did not affect the mark being distinctive to Tesco and that any third party use of the mark could actually amount to an infringement of its rights. Moreover, even if the mark could not be registered in the categories dealing with loyalty schemes, the applications should not be refused for the other classes of goods and services applied for.

The Court of Justice of the European Union (CJEU) in Case C-37/03 BioID v OHIM stated that the various grounds of refusal of registration of a trade mark should be interpreted in light of the general interest underlying each of them. In Case C-329/02 ~P SAT.1 SatellitenFernsehen GmbH v OHIM the CJEU added that a decision based on the ground stated in s.3(1)(b), that is a mark devoid of distinctiveness character, was intricately connected to the public interest and that in fact

“… the essential function of a trade mark is to guarantee the identity of the origin of the marked product to the consumer or end-user by enabling him, without any possibility of confusion, to distinguish the product or service from others which have another origin…”

A trade mark should therefore be capable of identifying the origin of a product and of distinguishing it from others on the market. This helps promote the public interest as it guarantees the origin of a product. Mrs Smith pointed out that, even if a trade mark was more than simply descriptive and in principle could be registered, it would not actually be eligible for registration if the mark failed to designate the origin of the product.

In assessing whether a trade mark is distinctive and hence does not come within s.3(1)(b), the two-step process laid down by the CJEU in Case C-363/99 Koninklijke KPN Nederland NV v Benelux-Merkenbureau (Postkantoor) was adopted by the IPO. There it was held that the distinctiveness of a mark should first be assessed with reference to goods and services for which the applicant seeks registration and then by reference to the perception of the relevant public. The relevant public to which the goods and services were aimed to in the case of Clubcard was deemed to be a non-specialist general public, that is, one which would demonstrate an average level of attention when considering their purchases.

In relation to the goods and services applied for, the IPO took issue with the classes relating to loyalty schemes and cards, that is classes 9, 16, 35 and 36. As for the second step it was said that, when assessing a mark’s distinctiveness, the perception of the average consumer, which in this case referred to the public, must be considered. Distinctiveness in that instance was to be assessed through immediacy or first impression test (Case T-130/01 Sykes Enterprises Incorp. v OHIM), that is when

Here, the separate dictionary meanings of the words 'club' and 'card' were analysed. On this basis an average consumer seeing the word Clubcard would see it as indicating a loyalty scheme but would not necessarily think of Tesco first. In fact, several third parties used the term on the internet.  While Tesco was the largest user of the word, that was a not a reasonable ground to grant it a monopoly in it.

Analysing the evidence of use the IPO said that, when determining if a mark had acquired distinctiveness through use, a decision should not be made based on the amount of use made by the applicant, but rather on the basis of whether, through that use, customers had started to recognise the sign as an indicator of trade origin. Here, the word Clubcard was not deemed to be distinctive enough as to refer solely to Tesco. 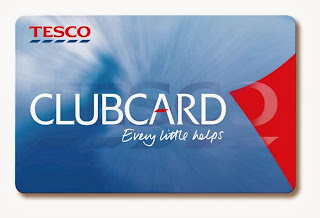 The IPO also pointed out that Tesco rarely used the word Clubcard on its own: it was usually accompanied by the word 'Tesco' and the slogan 'every little helps' (see illustration on the right). Tesco could therefore have had a case for secondary trade mark covering the word Clubcard, but only when used alongside either of the other two distinctive signs. Even so, there was a high burden of proof to satisfy by showing that Tesco had used the mark distinctively in order to educate the public that it was being used as an indicator of trade origin. Since Tesco promoted the mark mainly to its customers and not to the public at large, the IPO found that consumers had not been educated about the function of the word Clubcard as an indicator that Tesco was the trade origin.

Tesco’s application was to register the word Clubcard as a trade mark.  The IPO’s decision listed seven examples of third parties using of the words “Club Card” to design a type of loyalty scheme. However, in none of those examples were the two words joined together and written as 'Clubcard', the way Tesco uses it. Further,while all of them related to a form of loyalty scheme, none of those third parties was a chain of supermarkets dealing with the same range of goods and services as Tesco: in fact they referred to different services such hotels, pubs and restaurants. It also appears that the third parties did not use the words Club Card on their own, but rather in a descriptive manner, explaining the loyalty schemes of the third parties.

When deciding on whether the mark was distinctive, the IPO looked at the range of goods and services Tesco wanted to register the goods for; the perception of the general public and what the first impression people would have when encountering the mark. Some readers may be slightly surprised that Tesco’s use of Clubcard was not found to be distinctive, because Tesco did use it in a particular manner -- by making up the word Clubcard -- and because they had been using it so since 1995. Further, Tesco was by far the largest user of the term: might this not surely mean that the general public was more likely to think of Tesco first when they encountered the term, instead of thinking of the other less known third parties’ use of the words Club Card?  It is hard to see how consumers might be confused as to the origin of the product. Conversely, the IPO’s argument that Tesco should not have the monopoly of the term simply because it was the largest user seems fair. It would not be appropriate to allow big companies to acquire rights over a mark simply because they have more customers and can therefore broadcast their brands to a wide range of people more easily than smaller companies.

Tesco still has the possibility to challenge the IPO’s decisions by appealing either to an Appointed Person -- whose decision will be final -- or to the High Court. It could also submit a new application altogether, supplying more convincing evidence to support its applications.

Reviewed by Jeremy on Friday, December 13, 2013 Rating: 5
The IPKat licenses the use of its blog posts under a Creative Commons Attribution-Non Commercial Licence.