GoldieBlox v Beastie Boys: It's Not Over Yet 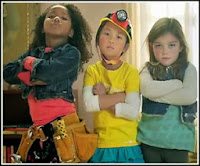 Two weeks ago, toy company GoldieBlox, which promotes and sells toys that encourage girls to explore male-dominated fields like engineering, sued the Beastie Boys in a declaratory action.  [Details in the Kat's prior post here.]  Through its suit, GoldieBlox was seeking judicial confirmation that its commercial video, which features three young girls singing alternative lyrics to the the Beastie Boys' song Girls, while playing with a Rube Goldberg-style contraption, constitutes fair use as a parody of the original song.


We don’t want to fight with you. We love you and we are actually huge fans.

When we made our parody version of your song, ‘Girls’, we did it with the best of intentions. We wanted to transform it into a powerful anthem for girls. Over the past week, parents have sent us pictures and videos of their kids singing with pride, building their own Rube Goldberg machines in their living rooms and declaring an interest in engineering. It’s been incredible to watch.

Our hearts sank last week when your lawyers called us with threats that we took very seriously. As a small company, we had no choice but to stand up for ourselves. We did so sincerely hoping we could come to a peaceful settlement with you.

We want you to know that when we posted the video, we were completely unaware that the late, great Adam Yauch had requested in his will that the Beastie Boys songs never be used in advertising. Although we believe our parody video falls under fair use, we would like to respect his wishes and yours.

Since actions speak louder than words, we have already removed the song from our video. In addition, we are ready to stop the lawsuit as long as this means we will no longer be under threat from your legal team.

We don’t want to spend our time fighting legal battles. We want to inspire the next generation. We want to be good role models. And we want to be your friends.

It seemed the parties had made peace with each other.  Or not....

On December 10, the Beastie Boys filed an Answer and asserted counterclaims including copyright infringement, trade mark infringement, unfair competition, and misappropriation of right of publicity (under California state law).

The Beastie Boys state in their Answer that,

The Beastie Boys are seeking damages, including GoldieBlox's profits from sales generated from the commercial.

This Kat suspects that this dispute will be resolved through a settlement, but watch this space for further updates.

Singing Kitty here
GoldieBlox v Beastie Boys: It's Not Over Yet

Reviewed by Miri Frankel on Thursday, December 12, 2013 Rating: 5
The IPKat licenses the use of its blog posts under a Creative Commons Attribution-Non Commercial Licence.