Further to the 2016 judgment (C-30/15 P) of the Court of Justice of the European Union (CJEU) [Katpost here] and the return of the case to the EUIPO, yesterday the General Court (GC) issued yet another ruling (T-601/17).

The GC confirmed that the trade mark registration should be cancelled on consideration that it falls within the scope of application of the absolute ground in what is currently Article 7(1)(e)(ii) EUTMR (the case was decided under the 1994 Regulation). 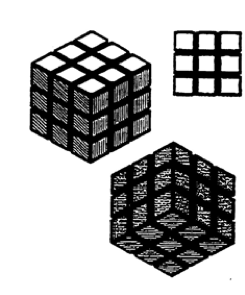 In 1996, Seven Toys filed an application to register the 3-D sign above as an EUTM for ‘three-dimensional puzzles’ in Class 28. The applicant claimed no particular colour for the mark, nor did it provide a description.

Registration was granted in 1999 (in 2014 the trade mark was transferred to Rubik’s Brand).

In 2006, Simba Toys filed an application for a declaration of invalidity of the mark, on the basis of what are now Articles 59(1)(a) and 7(1)(a)-(c) and (e) EUTMR. The Cancellation Division rejected the application, so that Simba Toys appealed, yet unsuccessfully, to the Second Board of Appeal.

Among other things, the Second Board of Appeal considered that the mark would not be contrary to Article 7(1)(e)(ii) EUTMR, in that the required assessment is one that only considers the representation of the sign, not ‘alleged or supposed invisible features’.

Further to yet another unsuccessful appeal to the General Court (GC) (T-450/09), as mentioned, in 2016 the CJEU set aside the GC decision in its entirety and gave final ruling on the matter. The CJEU only considered the ground concerning alleged infringement of Article 7(1)(e)(ii) EUTMR, and upheld Simba Toys’s ground of appeal: the GC had interpreted the absolute ground too narrowly. According to the CJEU, the EUIPO and the GC should have taken into consideration, not just the sign's representation, but also non-visible functional elements of the product represented by that shape, such as its rotating capability.

The matter thus returned to the EUIPO. In 2017, the First Board of Appeal invalidated the registration in its entirety and cancelled the trade mark from the register. A further appeal to the GC naturally followed.

Having recalled that shapes can be in principle be registered as trade marks, the GC revisited the rationale of the absolute ground in Article 7(1)(e)(ii), relying in particular on the CJEU Lego Juris decision.

The rationale of the ground is twofold. It seeks to prevent trade mark law from: (1) granting an undertaking a monopoly on technical solutions or functional characteristics of a product and (2) unduly supplementing the protection afforded under time-limited, expired IPRs, especially patents.

Moving from the consideration that any shape can be functional to some extent, EU legislature limited the application of the absolute ground only to signs consisting ‘exclusively’ of the shape (and now, also, ‘another characteristic’), which is ‘necessary’ to obtain a technical result.

Then, the CG recalled that, in order to determine applicability of the ground, it is necessary to identify the ‘essential characteristics’, that is the most important elements, of the sign at issue. This should be done on a case-by-case basis, as there is no hierarchy that applies systematically between the various types of elements of which a sign may consist. So, the essential characteristics could be identified on the basis of the overall impression produced by the sign or through an examination of the various components thereof, by means of a simple visual analysis or through a detailed examination which takes into account, eg, surveys, expert opinions, or data relating to earlier IPRs.

Further to the identification of a sign’s own ‘essential characteristics’, the competent authority needs to determine whether they all perform a technical function with regard to the goods at issue, eg by taking into account previous patents. If there is a non-functional element that plays an important role, then the shape at issue would not fall within the scope of application of Article 7(1)(e)(ii).

Rubik’s Brand submitted that the Board of Appeal had incorrectly stated that a ‘reasonably discerning observer’ would perceive that one face of the cube shows little squares pictured in white, and the rest of the faces are differently hatched in order to suggest different colours. Furthermore, in only considering the graphic representation of the sign, the Board had erred in finding that the ‘differences in the colours on the six faces of the cube’ constituted an essential characteristic of the contested mark.

The GC agreed with the applicant in relation to the latter point, finding that the Board of Appeal had clearly intended to state that the six faces of the cube were covered by six different colours. This, however, could not be inferred from the representation of the sign alone (as mentioned, the application carried no description).

Hence, the essential characteristic of the sign “are limited to the overall cube shape, on the one hand, and to the black lines and little squares on each face of the cube, on the other.”

All this said, however, this error of assessment of the Board would not affect the legality of its decision. Among other things, in line with the Philips judgment, the GC rejected the argument put forward by the applicant that there are alternative geometrical shapes capable of achieving the same intended technical result as that of the actual goods concerned. In fact,


the registration as a trade mark of a shape is likely to allow the proprietor of that trade mark to prevent other undertakings not only from using the same shape, but also from using similar shapes. A significant number of alternative shapes might therefore become unusable for that proprietor’s competitors

Following a lengthy analysis, the GC summed up the test to that should be applied as follows:

the absolute ground for refusal provided for in Article 7(1)(e)(ii) of Regulation No 40/94 may apply to signs consisting of the shape of goods the graphic representation of which does not reveal all the elements which are necessary for the implementation of the technical solution concerned, provided it is shown that the implementation of that technical solution cannot be effective without the essential characteristics which are visible in that graphic representation. Moreover, such a consideration underpinned the decision of the Court of Justice to set aside the original judgment in the judgment on appeal. It is apparent from that judgment on appeal that the fact that the rotating capability of the vertical and horizontal lattices of the ‘Rubik’s Cube’ resulted from a mechanism internal to the cube, that is, an element which was not visible in the graphic representation of the contested mark, did not prevent the Board of Appeal from being able to have regard to that rotating capability in its analysis of the functionality of the essential characteristics of that mark.
As EUIPO also quite rightly points out, if the prohibition under Article 7(1)(e)(ii) of Regulation No 40/94 only applied to shapes the graphic representation of which reveals all the characteristics allowing a product to perform its technical function, it could easily be circumvented. It would be sufficient to omit, in the graphic representation, a characteristic without which that technical function could not be achieved, notwithstanding the fact that that function requires the presence of all the essential characteristics displayed in the sign at issue. If this were the case, the provision referred to above would not safeguard the public interest in competitors being able to use technical solutions which are not, or no longer, protected by a patent.
In the present case, given that the two characteristics of the contested mark which have been correctly identified as essential by the Board of Appeal, in the present case the overall cube shape, on the one hand, and the black lines and the little squares on each face of the cube, on the other, are necessary to obtain the intended technical result of the actual goods concerned (see paragraphs 85 to 90 above), it must be concluded that that mark falls within the ground referred to in Article 7(1)(e)(ii) of Regulation No 40/94.

In conclusion, the GC confirmed that the mark should be cancelled in that it is a sign that consists exclusively of the shape of goods which is necessary to obtain a technical result.

The interpretation of the absolute grounds for refusal in Article 7(1)(e) EUTMR/4(1)(e) EUTMD has often proved problematic and uncertain.

Despite the relatively intuitive justification for such exclusions, the laconic wording of the law, together with the plethora of contradictory decisions issued, even in relation to the same shape (the Rubik's Cube trade mark is a clear example), have made it difficult to define the correct application of the grounds, as well as their relevant limitations.

Similarly, uncertainties have arisen in relation to how the assessment is to be conducted. The fact that the case law (including this decision) has considered that this depends on the circumstances at issue and that the relevant examination can be conducted in different ways has reinforced an idea of 'variability' in the application of the grounds.

Going back to the Rubik's Cube ... was yesterday's decision the end of the story? This may be a question that is as difficult to answer as solving the famous puzzle.

Reviewed by Eleonora Rosati on Friday, October 25, 2019 Rating: 5
The IPKat licenses the use of its blog posts under a Creative Commons Attribution-Non Commercial Licence.