GSK fails in purple inhaler passing off claim against Sandoz and Vectura (...and breathe)

This GuestKat finds the final result [spoiler alert: paragraph 316] - "all of Glaxo's claims are dismissed" - unsurprising. The author thought the writing was on the wall following the pre-trial review ([2019] EWHC 1528 (Pat) - not publicly available) in which Mr Justice Arnold (as he then was) excluded swathes of undeclared expert evidence from several of Glaxo's witnesses, although last week's judgment reminds us that this was just part of a "regrettable procedural history" going back to 2015, including "a great deal of interlocutory skirmishing".

Since 1999, Glaxo has sold purple "Evohaler" and "Accuhaler" (see below) inhalers for its blockbuster salmeterol / fluticasone propionate product, Seretide/Advair, a treatment for asthma and chronic obstructive pulmonary disease (COPD). Until 2015, Seretide inhalers were the only purple inhalers (and only inhalers sold in purple packaging) on the UK market; over 113 million had been sold by 2014. Glaxo also sells Accuhalers containing other active ingredients, which are distinguished from the Seretide Accuhaler by different colours (blue, green and orange); the earliest was sold in 1994. 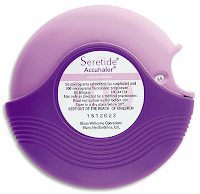 A Seretide Accuhaler, minding its own business, yesterday.

Glaxo's combination patent has long expired, and a patent protecting the Seretide Accuhaler dry powder inhaler (DPI) device expired in the UK (and was revoked in other jurisdictions including Germany) more recently. The UK market accordingly saw its first generic entry in 2015, albeit via a different form of inhaler delivery system. Pulmonary-delivered drugs, it seems, are hard to mimic. Later in 2015, Sandoz launched a branded generic competitor to the Seretide Accuhaler, the AirFluSal Forspiro [it just rolls off the tongue], a proprietary DPI manufactured by Vectura, with a different mode of operation to the Accuhaler. Coincidentally, or perhaps not, the Forspiro device is predominantly purple, although it is a different shape to the Accuhaler: 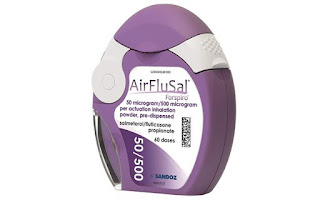 Like the packaging for the Seretide Accuhaler, the AirFluSal Forspiro packaging is also purple and white.

Glaxo was, it seems, displeased. Its trade mark infringement action failed when GSK's EUTM for the colour purple was revoked on summary judgment. Therefore, passing off it would have to be. By the time of trial, the key battleground was over the colour purple [the most popular colour in IP disputes, scientifically-speaking, with the possible exception of orange].

If you ever wanted to know more about the complex authorisation, prescribing and reimbursement systems and guidelines governing asthma and COPD treatments and their marketplace more generally, but were afraid to ask, this is your lucky day: enjoy paragraphs 8 to 155 of the judgment. For the sake of brevity, all that you really need to know is that both the Seretide Accuhaler and AirFluSal Forspiro are prescription-only medicines (POMs), the promotion of POMs to patients is highly restricted, and prescriptions are normally (and increasingly) written by brand name, not generically. This is because pulmonary-delivered products are not necessarily bioequivalent, and different inhalers have different modes of actuation and (potentially) variations in the dose delivered.

The parties agreed that informal colour conventions have developed in the UK in relation to certain types of inhaler (e.g. blue for SABA relievers), but Glaxo did not agree with the Defendants that such a convention had developed in respect of purple for salmeterol/fluticasone. The several other salmeterol/fluticasone combination inhalers launched in the UK since 2015, however, all featured purple and/or pink elements.

Glaxo's case outlined two forms of passing off, originally based on the entire "get-up" of the AirFluSal Forspiro, but later narrowed to just the colour purple:


There was copious evidence from trade witnesses, and survey evidence running to 16 expert reports in total. Glaxo's surveys had, however, been commissioned for earlier UK trade mark registry proceedings in 2015 and 2016. Consequently, none complied fully with the Whitford guidelines; the surveys were of HCPs, and not patients; only one question from the surveys provided any form of (indirect) evidence of patient identification of inhaler origin; and none of the surveys dealt with misrepresentation as to equivalence. As one might expect, the judge concluded that Glaxo's survey evidence was of limited value, and only established that HCPs would recognise the colour purple as a feature of Seretide inhalers (but not that HCPs would assume that any purple inhaler had the same trade origin). The judge also concluded, in pretty blunt terms, that he had seen no evidence that patients would perceive the colour purple as denoting any specific product characteristics.

Unsurprisingly, the judge dismissed both forms of passing off claim in relation to patients with little difficulty. The question of misrepresentation of equivalence to HCPs was slightly more complex, but with the same result. The evidence showed high levels of awareness among HCPs regarding the differences in the mode of operation of different inhalers; this is precisely why inhalers (especially DPIs) are increasingly prescribed by brand. And both sides' evidence showed that HCPs would not make assumptions about the scope of a product's marketing authorisation on the basis of colour; they would instead check the Summary of Product Characteristics (SmPC), British National Formulary (BNF), etc..

The Defendants were also required to give extensive disclosure against their alleged intention to deceive / recklessness as to deception in adopting the colour purple. The evidence showed no such intention; to the contrary, the judge found that the Defendants had good and legitimate reasons to adopt the colour purple (see below).

If there is a golden thread running through the judge's reasoning, it is adherence to careful analysis of the precise nature of Glaxo's goodwill. Yes, the evidence suggested that HCPs and patients would expect a purple inhaler to contain familiar active ingredients (salmeterol/fluticasone), but not that the colour denoted product characteristics beyond this, or a particular trade origin. It makes sense in this context that the judge seemed convinced by the point that there were legitimate reasons for the Defendants to choose purple. In particular, many asthma/COPD patients have more than one inhaler (for immediate "rescue" and longer-term "maintenance" use), so it is important that they can tell these apart. More generally, in light of the evidence regarding informal colour coding conventions, the Defendants' use of purple would help to reassure patients that they are receiving the correct medication.

A cynic might say that this case was more about the fact that UK market for Seretide is still worth £400 million per year to Glaxo, and less about the merits. GSK has enjoyed a long and lucrative ride with Seretide/Advair, which is only just tailing off. There was scant evidence of actual confusion (even though more than 500,000 prescriptions for AirFluSal Forspiro have now been filled), much less even recognition of Glaxo's alleged goodwill in the colour purple and/or its association with certain product characteristics.

In a dispute of this value, it stands out that Glaxo did not adduce survey evidence from patients. It is eminently possible, of course, that Glaxo attempted pilot surveys, but the results were not favourable. But perhaps the explanation is instead that because POMs cannot be marketed directly to patients and patients do not make the buying "decision" as such, what patients may or may not think is a secondary issue.

Overall, the judgment seems (to this GuestKat at least) a sane and predictable result based on well-established principles. The judgment turns entirely on the facts and therefore any appeal (if one is brought) is likely to be challenging.

GSK fails in purple inhaler passing off claim against Sandoz and Vectura (...and breathe)

Reviewed by Alex Woolgar on Tuesday, October 08, 2019 Rating: 5
The IPKat licenses the use of its blog posts under a Creative Commons Attribution-Non Commercial Licence.