Riana Harvey Friday, May 01, 2020 - #IPKat, England and Wales High Court, Passing off, Riana Harvey, trade marks
This case seemed to be stacked against claimants PlanetArt LLC from the start. Beginning as a passing off claim, PlanetArt were denied an interim injunction pending trial in July 2019 (IPKat analysis here), and failed to adduce pilot survey evidence in August 2019. However, the introduction of a trade mark infringement claim allowed PlanetArt to emerge (partially) successful, on the basis that the 'Photobox Free Prints’ app icon had infringed their trade mark (which, interestingly, had been filed a day before defendants Photobox Ltd were served). This judgment - [2020] EWHC 713 (Ch) - was handed down remotely by Mr Daniel Alexander QC, sitting as a Deputy Judge in the England and Wales High Court, under the new Covid-19 protocol.

Providing an interesting insight into the interaction between trade marks and mobile apps, as well as a detailed overview of UK approach to trade mark infringement and passing off (see paragraphs [15] to [46] and [47] to [80] respectively), this post will consider the main focuses of the case - namely, the claims of trade mark infringement under ss10(2) and 10(3) of the Trade Marks Act (TMA) 1994 and passing off. 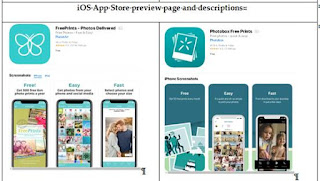 PlanetArt launched their app ‘FreePrints’ in the UK in 2014. The app, once downloaded onto a mobile device, allowed for the customer to have a certain amount of photos on their device printed for free every month, with the customer only paying delivery charges. The FreePrints app had been very successful in the UK, with over 11.5 million downloads within the UK by the end of 2019.

The defendants, Photobox Ltd, had a significant and established business operated by a pay-per-photo model. To directly compete with such free printing apps, Photobox launched the app complained of, ‘Photobox Free Prints’ in April 2019, providing a similar service to the FreePrints app, though with somewhat different charges. 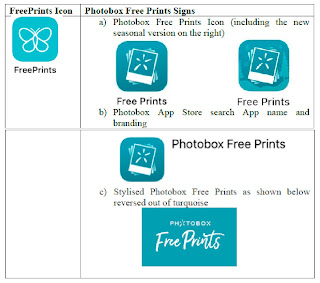 PlanetArt’s claims were based on: (i) trade mark infringement under s10(2) and s10(3) TMA 1994, based on the use of Photobox’s Free Prints Icon, the Photobox App Store search App name and branding, and the stylised Photobox Free Prints design  (marked as (a), (b), and (c) respectively in the table); (ii) passing off; and (iii) invalidity of the Defendant’s UK word trade mark for ‘PHOTOBOX FREE PRINTS’ (which will not be addressed here).

It was undisputed by the Deputy Judge that the marks complained of were the same or similar. When considering the global appreciation of the marks from the perspective of the average consumer, including its similarities and its differences, it was highlighted that it was also necessary to take into account the context of use to the extent permitted by the law (as set out in Specsavers v Asda). The Deputy Judge stated the importance of comparing the respective marks as a whole, rather than focusing on similarities and differences in their individual features. It had been identified that there were strong similarities in aural and visual elements of the signs, as well as some conceptual similarities.

In the context of the ‘Photobox Free Prints’ app icon, the Deputy Judge stressed that, in the evaluation of apps of this kind (photo printing apps), the words beneath a logo would likely be viewed as a brand rather than descriptive of the service in question, which would result in the average consumer placing trade mark significance on that term/phrase. This, combined with the relevant similarities of the visual and word elements (e.g. the selected colour combination, butterfly/starburst logo), as well as no clear dissimiliarities, the reputation of the FreePrints icon (which had been established in proceedings) and the identity of the goods and services, meant there would be a likelihood of confusion. Thus, the Photobox Free Prints app icon would amount to trade mark infringement within the meaning of s10(2) TMA. The Deputy Judge pointed out that this outcome would not be negated by the context of presentation of the marks. It was, nonetheless, still necessary for the court to be cautious in adopting an overly expansive approach to the consideration of ‘context’ in trade mark claims.

On the contrary, no such likelihood of confusion would arise when examining the Photobox App Store search App name and branding, and the stylised Photobox Free Prints design. Since both signs contained the word 'PHOTOBOX' prominently, greater origin-denoting significance would be given to 'PHOTOBOX', with 'FREE PRINTS' being given greater descriptive significance, since it appeared to be the most naturally descriptive of the app service offered. The part of the sign presented as the brand was distinctively dissimilar to any aspect of the registered mark, thus resulting in no likelihood of confusion, and no infringement under s10(2) TMA in respect of those marks.

When considering the ‘Photobox Free Prints’ app icon, this time under s10(3) TMA, it was apparent that the Claimant’s registered trade mark had sufficient reputation, and that the average consumer would establish a link. However, when considering if there would be detriment to the distinctive character of the mark, the Deputy Judge found that, marginally, there would be material damage. He noted that a claimant in such a position would face difficulties if they felt obliged to make their marks more different from that of newcomers in order to maintain the same level of recognition in the specific combination of features of the registered trade mark. Even in light of an absence of specific evidence, the Deputy Judge found, in these circumstances, that there was a sufficiently serious impairment of the claimant’s trade mark here. The same (marginal) conclusion was also reached when considering unfair advantage: it was once again stressed that this was as a result of the Defendant’s use of a specific combination of features, even though it was not the specific intention of the Defendants. The Defendants were also found to be unable to show “due cause” in the case of the ‘Photobox Free Prints’ app icon, since their specific combination of other elements did not necessarily have to be chosen and there was no use of Photobox branding in the app icon.

This was not the case for the Photobox App Store search App name and branding, and the stylised Photobox Free Prints, for the same reasons as that which stated that there would not be an infringement under s10(2) TMA - the prominent use of ‘PHOTOBOX’ rendered the latter ‘FREE PRINTS’ descriptive, so as to render the use as a whole justifiable. The colour and icon design were not found to detract from these conclusions.

The Deputy Judge noted that there was some goodwill to be found in elements of the mark (in ‘FreePrints’, and the visual elements of the FreePrints Icon taken on their own, such as the butterfly design and its colouring), but not in others (the colour turquoise, or the colour combination of turquoise and white alone). When examining whether there had been misrepresentation, the Deputy Judge noted the importance of the broader context of use of the mark in the passing off claim, and how (barring the icon itself) there was significant use of Photobox branding, which would dispel any potential for actual confusion. This, combined with the lack of evidence of actual confusion, which should have showed itself between April and November 2019 when the apps were trading side by side, meant that there was no misrepresentation. This in turn meant that no damage had been caused, and thus that passing off had not occurred.

The case demonstrates the limitations of using a descriptive mark as a brand. Perhaps the most interesting part comes in the Deputy Judge’s ‘afterword’ (under ‘Future conduct of the claim’), where he addressed the next steps of the parties. Attention is drawn to the fact that, whilst one of the main uses of the Defendants’ branding was found to be too close to the claimants’ to be lawful:

other uses… while not, in my view actionable, constitute what might be described as antisocial non-distancing of the Defendants’ identity from that of the Claimants.

While this Kat commends the Deputy Judge’s topical choice of words, his warning is also apparent - avoid using such [obvious] choices of colour combination and logo design. The Defendants were also told to consider adopting a more respectful attitude to ensure a distinction between the respective businesses, though warning was also given to the claimants in that they could not and should not attempt to prevent genuinely descriptive use of the term "FREE PRINTS" in respect of business or apps offering free prints.

Nonetheless, this case is probably one that the courts are keen to be over with - with 3 substantive further hearings in this case, this was perhaps not what was envisaged for the Shorter Trials Scheme.
Trade marks and mobile apps: the PlanetArt v Photobox saga draws to a close (in PlanetArt's favour)

Reviewed by Riana Harvey on Friday, May 01, 2020 Rating: 5
The IPKat licenses the use of its blog posts under a Creative Commons Attribution-Non Commercial Licence.