On rules, reasons and repetition - the ECJ decision in 'The Kitchen Company'

The European Court of Justice has given its ruling this morning in Case C-239/05 BVBA Management, Training en Consultancy v Benelux-Merkenbureau, a reference from the Brussels Court of Appeal for a preliminary ruling on several issues of European trade mark law. Basically, BMTC applied to register the words ‘The Kitchen Company’ as a trade mark in the Benelux for certain goods in Classes 11, 20 and 21 and for services in Classes 37 and 42 of the Nice Agreement. The goods and services were set out for each class: for Class 21 the application covered kitchen utensils and household and kitchen equipment made of glass, porcelain, non-precious metals, plastic and earthenware. The Benelux-Merkenbureau (BMB) refused registration on the ground that the mark lacked distinctive character, without formulating separate conclusions in respect of each of the individual goods and services for which protection was sought, comsidering that the words lacked distinctive character for all the goods and services as a whole.

BMTC appealed to the Court of Appeal, Brussels. The court upheld the BMB’s decision that the mark lacked distinctive character in respect of all of the goods and services specified in the application for registration, with the exception of certain goods in Class 21. Of those goods, kitchen utensils had some distinctive character on the basis of their nature and intended purpose. As regards the other goods, the word combination ‘The Kitchen Company’ would not, in the perception of the average consumer, on the basis of spontaneous linguistic reflex, refer to the intended use of the goods. Consequently, and contrary to the opinion of the BMB, the court thought the mark distinctive for those goods. The BMB objected to this. In its opinion the court could not consider this option since BMTC did not seek registration only of certain goods, either in its initial application or in the objection it lodged with the BMB, and the court could not examine applications that went beyond the decision of the BMB or that had not been made by it.The court disagreed, considering that its decision to exercise jurisdiction was logical and that, in any event, the relevant facts and circumstances may change between the moment when a competent authority reaches a decision and the moment at which a court reviewing that decision reaches a determination on the appeal. However, the court decided to stay the proceedings and refer three questions to the ECJ for a preliminary ruling:

"(1) Is the trade mark authority required, after its examination of all relevant facts and circumstances concerning an absolute ground of refusal, to state in its provisional and in its definitive decision on the application [for registration of a trade mark] its conclusion in regard to each of the goods and services separately in respect of which trade mark protection is sought? 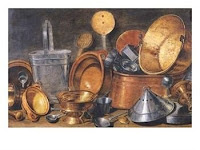 (2) May the relevant facts and circumstances to be taken into account by the adjudicating authority in the event of an appeal against the decision of the trade mark authority be different as a result of a lapse of time between the two [ ] decisions [ ] or must the adjudicating authority only take account of such facts and circumstances as were available at the moment when the trade mark authority made its decision?

Left: this beautiful still-life with kitchen utensils, by Cornelis Delff, is available as a print from art.co.uk

(3) Does the interpretation by the Court … in [Koninklijke KPN Nederland] preclude national legislation in regard to the competence of the adjudicating authority from being construed as meaning that that authority is prevented from taking account of any alteration in the relevant facts and circumstances or from ruling on the distinctive character of the mark for each of the goods and services [individually]?".

In answer to these questions the ECJ responded this morning:

– when refusing registration of a trade mark, the competent authority is required to state in its decision its conclusion for each of the individual goods and services specified in the application for registration, regardless of the manner in which that application was formulated. However, where the same ground of refusal is given for a category or group of goods or services, the competent authority may use only general reasoning for all of the goods or services concerned;

– it does not preclude national legislation which prevents the court reviewing the decision of the competent authority from ruling on the distinctive character of the mark separately for each of the individual goods and services specified in the trade mark application, where neither that decision nor that application related to categories of goods or services or goods or services considered separately;

– it does not preclude national legislation which prevents the court reviewing a decision of the competent authority from taking account of facts and circumstances which arose after that decision had been taken".

This decision doesn't seem hugely controversial, says the IPKat. The need to give reasons for decisions is fundamental, while the futility of churning an endless repetition of duplicate reasons in respect of long lists of goods and services serves no purpose in the real world. Of more interest is the fact that Directive 89/104, which goes no further than pushing EU member states towards a partial approximation of national (and in the case of the Benelux, regional) trade mark laws, should have ever been thought of as possessing the capacity to prevent member states regulating through statute law the terms under which registry decisions can be reviewed by the courts. Merpel adds, but if a court on appeal is confined by law and can only look at the appeal before it through the eyes of the past, whose interest are we really serving in the present and for the future?
On rules, reasons and repetition - the ECJ decision in 'The Kitchen Company'

Reviewed by Jeremy on Thursday, February 15, 2007 Rating: 5
The IPKat licenses the use of its blog posts under a Creative Commons Attribution-Non Commercial Licence.