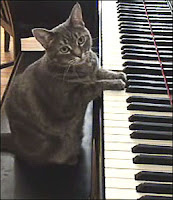 Freehills senior associate Craig Smith brings the IPKat this link to the Sunday Morning Herald, concerning Nora the musical cat. Based in Philadelphia, Pa., Nora surprised her owners Burnell and Betsy by her propensity to play piano. Nora has become a YouTube celebrity after Burnell and Betsy posted a video, "Practice makes purr-fect", which has been viewed by more than 810,000 visitors to that site.

Ever sensitive to IP niceties, Craig considers whether Nora's original musical works and performances are protected under Australian law and whether perhaps her rights have been infringed by her human cohabitants:

"Our Copyright Act gives rights to ‘persons’, and our Acts Interpretation Act in turn defines ‘person’ inclusively, including as part of that definition a ‘body corporate’. Some pretty clear inferences follow:

(1) our legislature considers that the term ‘person’ doesn’t have a clear natural meaning, hence they have taken the trouble to define it;

(2) since the inclusive list in the statutory definition includes a body corporate (which I’m pretty sure is something that doesn’t have a digestive system, brain, pulse or even a sex), our legislature has clearly signalled that they are using the word ‘person’ in a very broad sense (making its extension to a member of the felis catus family seem quite likely);

(3) the list, being an inclusive one, can only mean that our legislature contemplated that our courts would recognise that other creatures capable of being an author would achieve protection under our Copyright Act".

Says the IPKat, it's the old copyright term question again: if Nora's musical works are entitled to protection, from which of her nine lives does post-mortem protection start to run. Merpel adds, I wonder if she finds the music of Byrd particularly catchy ...

Rossini cat duet here and (on YouTube) here, for those with an ample sense of humour or first-rate earplugs
Kat-chaturian here

Now here's a bit of challenging reading for those whose interest takes in not only core IP issues but their interface with the wider world. Regional Trade Agreements and the WTO Legal System is the title of a new book published by Oxford University Press and edited by academics Lorand Bartels and Federico Ortino. Both are academics, Bartels (below, left) being Lecturer in International Economic Law at the University of Edinburgh, Ortino (below, right)being a Fellow in International Economic Law and Director of the Investment Treaty Forum at the British Institute of International and Comparative Law, London.

What the publisher says:

past decade has provoked many new legal issues in WTO law, public international law, and an emerging law of regional trade agreements. The various Parts of this book chart this development from a number of perspectives.

What the IPKat says:

"This is never going to be an easy read for a black letter lawyer in private practice in the field of IP, nor indeed will the casual IP law student find it a handy supplement to his prescribed course reading. But they are not the editors' prime readership: this is a technically advanced book that makes few concessions to the reader's ignorance or parochial outlook. While some of us may have come across occasional specific Regional Trade Agreements (RTAs), most of us will have little idea of the scale of their proliferation or of the notion that, within the general scheme of international trade law, RTA law is evolving into an identifiable body of law in its own right.

For us, the chapter entitled "TRIPs-Plus Provisions in FTAs: Recent Trends", by Bryan Mercurio (Senior Lecturer in the Faculty of Law, New South Wales) is probably the most accessible chapter, along with that which follows it ("Competition Law in Regional Trade Agreements: an Overview", by University of Dundee academics Melaku Geboye Desta and Naomi Julia Barnes). Anyway, congratulations both to the editors for compiling this challenging work and to its contributors for their clarity of exposition".

Reviewed by Jeremy on Thursday, February 22, 2007 Rating: 5
The IPKat licenses the use of its blog posts under a Creative Commons Attribution-Non Commercial Licence.