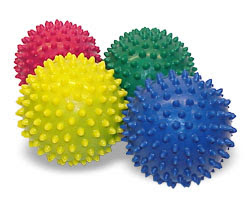 Fresh from the ever-excellent, cost-free BAILII case law database is the ruling of Mr Justice Lewison yesterday in Green Lane Products Ltd v PMS International Group Ltd and others [2007] EWHC 1712 (Pat). Although it's a Patents Court ruling, the topic under judicial scrutiny was the Community design right.

Green Lane sold laundry balls (a product of which, to his embarrassment, this member of the IPKat team had no prior knowledge). These laundry balls, which are apparently placed inside a tumble dryer in order to soften fabrics without the need for chemicals, were packaged in pairs of spiky blue and pink pastel plastic balls, one of which had square nodes, the other round nodes. They were also reputed to reduce drying time by 25%. A selection of laundry balls is depicted (above, right) for illustrative purposes.

Green Lane registered its designs as Community registered designs under Council Regulation 6/2002 on Community designs in August 2004, the certificate of registration described the products for which the design was registered as 'flatirons and washing, cleaning and drying equipment'. In August 2001 PMS ordered a company in China to create a tool for making spiky plastic balls; PMS then marketed balls made from that tool extensively in the European Union and elsewhere from 2002, though they were sold as "massage balls", not laundry balls. In October 2006 PMS realised that their tool could also be used to make balls sold as laundry balls and as "massage, hand exerciser, easy-catch toy, dog trainer" balls. Green Lane said PMS would infringe their design rights if they continued to sell their product for anything other than use as massage balls. PMS were unconvinced that Green Lane's design registrations were valid since spiky balls were a known phenomenon well before the date of Green Lane's registrations.

Article 7 of the Regulation deprives a design of protection if it had already been made available to the public at the time when registration was sought. In this context:

In this context a preliminary issue arose as to what was the "sector concerned" in this case? According to Green Lane it was only the sector covered by the product class specified in the registration. PMS disagreed: in their view the relevant sector consisted of or included the sector of the alleged prior art.

Lewison J, holding for PMS, agreed that the "relevant sector" was the sector that consisted of, or included, the sector of the alleged prior art. In his view the definition which Green Lane argued for could give rise to several surprising consequences, it being most unlikely that any of those consequences had been intended.

The IPKat says, you can read these at paras 22 to 25 of the judgment: while the fact that an interpretation of a legislative provision may have surprising consequences does not mean that it is wrong, when that interpretation lacks support from background legislative materials it is unlikely to be followed where an interpretation with less surprising consequences can equally be adopted. Merpel adds, the learned judge has been having a go at one of our national treasures, The Modern Law of Copyright. He says:

"14. ... The authors of Laddie Prescott & Vitoria The Modern Law of Copyright and Designs hedge their bets (para 44.30). They tentatively suggest that the relevant sector is a single sector comprising both the sector of the registered design and the sector of the prior art (although somewhat confusingly they refer to the latter as "the sector in which infringement is asserted"). They go on to suggest that a registration might be partially invalid in that it would not apply to certain commercial sectors, while remaining valid in relation to commercial sectors in which there was no prior art.

31. I must now explain why in my judgment the solution of partial invalidity proposed by Laddie Prescott and Vitoria is erroneous. What they appear to contemplate is that a design may be valid as regards some sectors and invalid as regards others. The reasoning is founded on a reading of Article 25.6 (or its equivalent in the Directive) which says that if a design has been refused registration or been declared invalid, it may be registered in an amended form. The registration may be accompanied by a "partial disclaimer" by the holder of the CRD. But what this contemplates, in my judgment, is not that the whole design can be registered with a disclaimer of its application to certain product classes. Rather it contemplates that part of the design itself may be disclaimed. Any other reading would be inconsistent with Article 10 which does not allow for differentiation between different classes of product.

32. Moreover, even assuming that Article 10 did allow for differentiation between different classes of product, the problem is still not cured. The effect of the disclaimer would be to narrow the scope of the registration. But Articles 5 and 6 are concerned with designs in the prior art irrespective of product. Since they cannot be rewritten, the problem remains".

Will laundry balls wash? Click here and here to find out 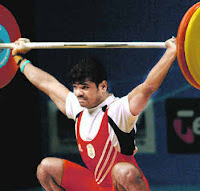 Indian lawyer and Pharma Patents blogger Feroz Ali has just told his friend the IPKat about his new book, The Law of Patents – With a Special Focus on Pharmaceuticals in India, published by LexisNexis Butterworths, India. A copy is on its way to the IPKat, who will subject it to his usual stern scrutiny. In the meantime the Kat is delighted to see, among the book's bibliographic details (ISBN 978 81 8083 150 8. Price Rs 1595. Hardback, xliv + 1161 pages), the information that the rupture factor is not critical.

Reviewed by Jeremy on Friday, July 20, 2007 Rating: 5
The IPKat licenses the use of its blog posts under a Creative Commons Attribution-Non Commercial Licence.