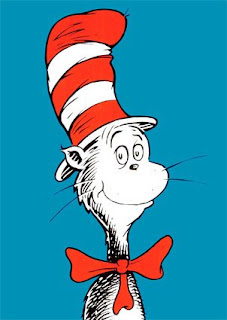 The IPKat is proud to announce the results of its poll to determine its readers' choice for the position of Fantasy WIPO Director General. The results are as follows:

The Cat in the Hat (right) was created in 1954, which makes him the same age as WIPO DG Kamil Idris (below, left) according to some opinions.

Despite his acute physical deformities, which caused some to question his credentials as a member of the feline species and even to suggest that he was a primate, the Cat in the Hat has been a dedicated supporter of literacy programmes in the developed world, enabling generations of illiterate Americans to master the 223 words that would take them from cradle to college. Known for his affection for children and his passion for catterel (that's doggerel for cats), he is one of only a few creatures whose escapades have had the distinction of being translated into both Latin and Yiddish.

If any dedicated reader would like to write a new mission statement for WIPO in the style of the Cat in the Hat, this weblog will be delighted to publish it. Just send it here, marked "WIPO".
New Director General for WIPO

Reviewed by Jeremy on Tuesday, July 03, 2007 Rating: 5
The IPKat licenses the use of its blog posts under a Creative Commons Attribution-Non Commercial Licence.