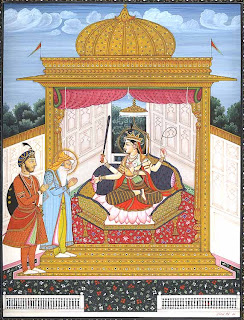 Yesterday the AmeriKat was walking through the V&A’s new Maharaja exhibit, absorbing all the luxuriant turquoise and gold colours speckled through miniature watercolours and 245 karat diamonds inlaid in jewelled encrusted necklaces. The exhibit was a thankful burst of sunlight on a blustery Fall day. The exhibit follows the changing societal and political role of the maharajas from the 18th century to the mid-20th century. With British control of over three-fifths of the Indian sub-continent, India was called the jewel in the British Empire’s crown; an Empire where the sun never set.
Not “everything under the sun”
The sun may have never set during the height of the British Empire, but it appears to be setting on Bilski v Kappos following the oral arguments last Monday before the Supreme Court (see IPKat’s mentions of Bilski here). All Justices, according to the Wall Street Journal’s Supreme Court correspondent Jess Bravin, appeared to be “sceptical and at times scornful ... to arguments that there should be broader patent protection for ‘business methods’”. The AmeriKat read the transcript of the oral arguments presented last week and to her it was like reading the verbal equivalent of watching a Kat paw at a spider for an hour before finally eating it. For the benefit of IPKat readers she has summarized and picked out the pertinent parts of the arguments. For a brief summary of the case please see IP Finance article here.
Mr J. Michael Jakes, appearing on behalf of the Petitioners (Bilski and Warsaw) opened the arguments by stating that the Federal Circuit’s decision test for “machine-or-transformation test” was too rigid and narrow for all patent-eligible methods and must be reversed. Mr Jakes stated that the requirement that any and all methods must be tied to a particular machine or transformation does not find any basis deriving out of Section 101, anywhere in the patent statute or the Supreme Court’s precedents. Mr. Jakes argued that the purpose of patent law was to “accommodate unforeseen advances in the useful arts” and the patent at suit did not fall foul of the exceptions.
Referring to European patent law, Justice Ginsburg stated “they [Europe] do not permit business method patents. It has to be tied to technology, to science or technology. So if other systems are able to work with the notion of technology-based, why not ours?” Mr Jakes agreed but recognized that defining ‘technology’ is problematic by stating that these systems have defined “technology in such a way to exclude business methods. And I don’t think we can do that.” He went on to support this proposition by citing the significant expansion of technology in the past 100 years in fields previously unimaginable.
Mr. Jakes premised the majority of his submission on the Diamond v Diehr decision. Justice Stevens was clearly unimpressed by the strength of this precedent, stating that case was “nothing like this patent.” Mr Jakes countered that the general language in the opinion outlined the general principles of patentability he relied upon but distinguished the case in that the invention there was

“an industrial process of the conventional type, because it was a method of curing rubber. But today the raw materials are just as likely to be information or electronic signals, and to simply root us in the industrial era because that’s what we knew I think would be wrong and contrary to the forward-looking aspect of the patent law.”

Justice Sotomayor questioned that “wasn’t that what the Federal Court was trying to explain, which is that there has to be something more substantive than the mere exchange of information; that it has to involve – it used the word ‘transformation’.” She added that the Federal Circuit had not defined the extent and scope of what it meant by the word ‘transformation’, i.e. so what’s the problem then?
Mr Jakes argued that, by rigidly applying the transformation test, as had been done in the Federal Circuit, what the courts are doing is excluding possible patents where a “transformation” is not strictly necessary. For example, he argued, “even [Alexander Graham] Bell’s claim, the claim to transmitting sound using undulating current, wouldn’t necessarily pass the transformation test.”
Mr Jakes stated that where a patent does not satisfy the transformation test and thus should arguably not be patentable, that same patent would also fail the obviousness test. Therefore, instead of overly restricting the concept of patentability and limiting potential useful patents at the first threshold, the exercise should instead occur at the point of obviousness. This echoed the argument that has taken place regarding the EPO’s “any hardware” approach versus the UK’s “technical effect” approach in business-methods patents. Where the UK may knock out a business-method patent at the point of “invention”, the EPO would knock out a business method patent at the point of inventive step. Although the practical effect of whether a patent fails at the invention stage of the assessment, or at subsequent stages (inventive step) may be indistinguishable, this is not satisfactory. The questions asked at these different stages are premised from completely different perspectives. The AmeriKat, thus, in this respect disagrees with Mr Jakes’s premise that the question could just be shoved down the line of assessment, so to speak. That in effect, just passes the buck from “what we should patent?” to “”whether the patent is obvious?” without taking into account the independent and distinct purposes of these questions.
There was subsequent back and forth argument between Mr Jakes and Justice Scalia regarding what exactly is a “physical transformation” before Mr Jakes ended his opening submissions (at pages 24-25).

Mr Malcolm L. Stewart, Deputy Solicitor General, did not have much more of an easy time. Essentially, Mr Stewart’s argument came down to the point that the Government did not think that “this case would provide a suitable vehicle for resolving the hard questions because the case doesn’t involve computer software or medical diagnostic techniques.”
Left: "a suitable vehicle for resolving the hard questions ..."
This echoed Justice Sotomayor’s concern earlier in the arguments (at page 29) that a decision that would allow an expansive approach to allowing business-method patents like the one in suit, could have potentially detrimental impacts in the biomedical world.
The various press reports of the oral submissions seem to indicate that Bilksi’s case is doomed. This case seems to be headed to a decision which will not, in Justice Ginsburg’s words, make “any bold steps”. For further reports please see these articles in the Wall Street Journal, New York Times, and the Washington Post.
And now for something lighter
Always a fan of Justice Breyer, the AmeriKat enjoyed his numerous comedic moments throughout the oral arguments; in particular when he questioned Mr. Jakes regarding a far-fetched patent idea:

“So you are going to answer this question yes. You know, I have a great, wonderful really original method of teaching antitrust law, and it kept 80 percent of the students awake. They learned things --- (laughter). It was fabulous. And I could probably have reduced it to a set of steps and other teachers could have followed it. That you are going to say is patentable, too?”

Mr Jakes replied “potentially”. Sigh!
Question: What do the Kats and the Kappos have in common? 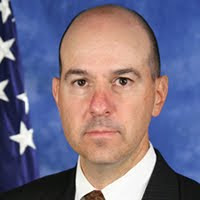 Answer: They both blog! David Kappos, director of the USPTO has begun his blog in order to, in his words, “foster as active and open a dialogue as possible with our stakeholders...I hope this will be a useful vehicle for sharing ideas and concerns on a regular basis.” The topic of his first posting unsurprisingly had to do with post-grant reviews and first-to-file procedures. To give Kappos and the USPTO some feedback, please see his blog here.
Right: is this the IPKapp?
Letter from AmeriKat: Bilski v Kappos

Reviewed by Annsley Merelle Ward on Sunday, November 15, 2009 Rating: 5
The IPKat licenses the use of its blog posts under a Creative Commons Attribution-Non Commercial Licence.