Jeremy Monday, February 21, 2011 - Jeremy Phillips, Monday miscellany
Earlier today the IPKat called for some gallant soul to give him some background on Case C-5/11 Titus Alexander Jochen Donner, which has been referred to the Court of Justice of the European Union for a preliminary ruling. What, he wondered, was it all about? The noble Tobias Irmscher has emailed this weblog with the crucial background knowledge (for which the Kats in unison sing his praise):


"The case concerns an arrangement for ordering unlicensed copies of Bauhaus furniture etc from Italy to Germany, for which no (enforceable) protection existed in Italy at the material time (between 2005 and 2008). Under this arrangement, a person ordering the items agreed that the transfer of ownership would take place in Italy at the Italian producer's storage facility; the purchaser would agreed to pick the items up in person or to arrange for its picking up by his agent. However, the order form contained an advertisement and an easy order possibility for the shipping services offered by the company of the accused Mr Donner, the services of whom were recommended. He was charged under sections 106 and 108a German Copyright Act with aiding and abetting the prohibited distribution of copyright-protected works in Germany.

While the court of first instance (Landgericht Munich II) recognised that the transfer of ownership took place in Italy -- where the production and distribution of the items concerned was not illegal at the relevant time -- they considered that, de facto, the transfer of the power of disposal took place in Germany where, because of the copyright protection, the distribution would constitute a criminal offence at the time. The decisive question for the Bundesgerichtshof was where - for the purposes of interpreting section 17 German Copyright Act (right to distribute) - the "distribution to the public" in terms of Art. 4(1) Directive 2001/29 [yes, that's right, says the IPKat, it's the Information Society Directive, specially designed to deal with hi-tech copyright in the information age and the movement of furniture across the Alps] took place. The court confirmed the first instance judgment that, in the present case and for the purposes of applying German criminal law, such distribution to the public took place in Germany, as this was where the items left the sphere of the vendor (whom the shipping company was only assisting).

However, the question was raised whether this application of national criminal law would result in an unjustified restriction of the free movement of goods under Articles 34 et seq. TFEU. The Bundesgerichtshof tends to agree to an application of the principles of the ECJ in EMI/Patricia (judgment of 24 January 1989, C-341/87) as proposed by the first instance court. This decision concerned only the different durations of protection, but it should be applied a maiore ad minus where there are only differences in the enforceability of similar rights.

The court order of 8 December 2010 (1 StR 213/10) containing the request for a preliminary ruling may be found here (German only), and a not-quite-up-to-date translation of the German Copyright Act can be found here".

Via Hut'ko's IT & IP Legal Blog comes news of an interesting reference which the German Bundesgerichtshof is making to the Court of Justice for a preliminary ruling.  The case is Oracle v UsedSoft, in which Europe's top court is being invited to rule on whether downloaded software may be traded as "used".    More details are available from UsedSoft's press release here and from the Bundesgerichshof's press release here. 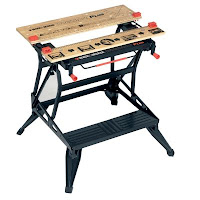 It is with sadness that the IPKat records the death of Ron Hickman, an extraordinary inventor and enjoyably robust character, at the respectable age of 78.  Ron is best known for the invention sold successfully around the world as the Black & Decker WORKMATE work bench (right).  Ron's patents were heavily litigated because many people found it difficult to believe that a contraption made entirely out of ordinary items which performed their normal functions could ever be inventive -- but the invention lay in their ingenious configuration.  Ron was not a one-trick donkey, either.  He also designed the original Lotus Elan, a beautiful vehicle which this blogger could never contort himself sufficiently to get inside it.

This member of the IPKat team met Ron when he spoke at the Institute of Patentees and Inventors meeting back in the 1980s and he was struck by Ron's direct, no-nonsense approach to problem-solving and his refusal to pontificate about the state of the patent system.  His invention was also one of the first to enjoy the benefits of a layered licensing structure with separate royalties expressed in respect of use of the patent, know-how, design drawings etc so that, if the patent was invalidated, the other bits of the licence could still generate income.

The IPKat thanks his good friend Tufty for breaking the news to him so gently.

"Win the game, lose the plot".  The IPKat is pleased to say that the seminar on plots, games and other copyright-protected (or unprotected) content, hosted at Hardwicke, Lincoln's Inn, on 9 March, is a complete sell-out.  There may still be some cancellations, so it's worth giving your name and details to Lisa Pick just in case.  More details of this seminar, in which three members of the IPKat team are participating, can be found here.
More Monday Miscellany

Reviewed by Jeremy on Monday, February 21, 2011 Rating: 5
The IPKat licenses the use of its blog posts under a Creative Commons Attribution-Non Commercial Licence.