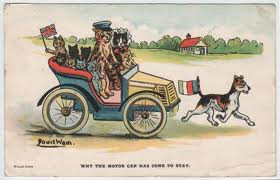 They often tell the story of the businessman who, at the end of the 19th century, decided to invest in buggy-whips about the time that the first motor cars were beginning to appear on the roads. There was no way that those new-fangled devices would ever replace the horse and buggy as the preferred means of mass transportation.

Something similar has been going through the mind of this Kat, when he is asked by mere kittens in the copyright profession what kind of copyright tool-box they should arm themselves with to compete successfully in the profession. This Kat finds himself more and more fumbling in his response, as he tries to work out for himself what digital content will mean for the practitioner. "Content--yes; copyright--maybe"? Just the musings of an aging feline, you might think. Read on.

One of the most intriguing questions about the explosion of content online is whether it portends a reordering of the relationship of copyright to content, distribution platforms and consumer consumption. Common wisdom holds that the explosion of smart phones, tablets and various devices in between, has put content front and centre in our lives as never before--content on demand, anywhere, anytime, subject only to the limits of available bandwith.

Against this backdrop, and having regard to the triangle of content, distribution and consumption, are we now at the cusp of a new Golden Age for the creators of copyright contents? Or is the future one where copyright continues to be uncoupled from content; while content may be king, it may not be copyright content that necesarily wins out.

On the one hand, we have the world of YouTube and Netflix. If both are to prosper in a world of streaming, both will need creative content. This is more easily said than done (wtiness the difficulties of Netflix to acquire creative content and its expressed intention to invest in the creation of original contents to fill in part this void). That sounds like a big vote of confidence for the continuing centrality of creative content at the heart of current and future digital distribution.

As copyright professionals, that seems to point to business as usual, subject to a bit of tweaking to accommodate ourselves to technological change. No problem, that is something we have been doing since at least the advent of television 60 years ago.

Set agains this is a less sanguine view, where the Brave New World of digital content will lie increasingly outside the copyright system. This was brought home to me in a recent Bloomberg podcast about the state of the media business. The interviewee, a well-known media analyst, surveyed the various platforms for distribution of contents. His main observation was that traditional television viewing will continue to give way in the battle to maintain the market share of television viewers in the face of these various alternative distribution platforms. While interesting, that observation per se did not break any new conceptual ground for this Kat.

What did attract my attention was his comments about what kind of content will ultimately be most commercially successful. In his view, without a doubt, the big winner will be broadcasting of the National Football League which, in his words, "is the most valuable content on the planet" (I suppose one could add to that broadcasts of English Premier League matches for European and Asian sports markets.) That is an interesting comment when one considers that ESPN, one of the major purveyors of football (indeed sports in general), is a holding of The Walt Disney Company. Indeed, I have heard more than once in Podcastland that ESPN is Disney's most profitable holding. Valuable content, yes, but hardly quintessential creative content.

Circling back one more time to that buggy-whip manufacturer, he considered two ways to expand his business. His brother told him to go into horseshoes, a nice complement to his existing business. His wife urged him to think about making seats for the new contraptions that were appearing on the roads. In which direction did he go; in which direction do we go today?

Reviewed by Neil Wilkof on Sunday, December 11, 2011 Rating: 5
The IPKat licenses the use of its blog posts under a Creative Commons Attribution-Non Commercial Licence.