Apple and Foxconn: When Saying Less Might Be Better 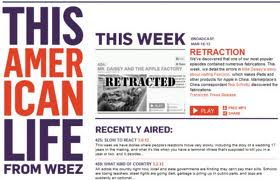 It is often said that Apple's ultimate secret has been its ability to create a self-contained ecosystem, with the Apple brand at the epicentre. In reality, though, the Apple brand sometimes finds itself inextricably intertwined with the reputation and goodwill of its partners, to the company's detriment when the partner is the subject of public scrutiny and even criticism. Perhaps the most notable example is the connection between Apple and Foxconn Technology Group, the giant China-centered contractor manufacturer, which makes various components for Apple (and for other electronic manufacturers).

For some time now, Foxconn has been under the microscope of critics who have complained about the work conditions at the company, pointing out, inter alia, what was viewed as a rash of employee suicides a while ago. The Apple name has been dragged into the public commentary on Foxconn, and Apple has sought to walk the tightrope between appearing to be taking ameliorative steps to correct alleged wrongs at Foxconn, on the one hand, and offering support for Foxconn as a key (perhaps "the" key) component supplier for the company, on the other.

This public controversy was reignited several months ago by the broadcast of an episode on the highly acclaimed weekly radio programme "This American Life", which is aired on National Public Radio. In particular, the 6 January 6 broadcast focused on a monologue given by Mike Daisey, which purported to describe the harsh working conditions of employees at the Foxconn facility (which has been described as 11 hours a day, six days a week, with unreasonably high production quotas). This Kat later heard the programme as a podcast (on his Apple Nano, of course), and he was not alone. It has been reported that there have been over 888,000 downloads of the programme, the most ever for "This American Life". Daisey himself has also been giving a one-man show, entitled "The Agony and Ecstasy of Steve Jobs". at the Public Theater in New York.

Imagine the surprise, therefore, when reports surfaced this weekend, including on Bloomberg.com ("Apple,Foxconn Report Retracted by "This American Life") here that "This American Life" was retracting the contents of its 6 January programme, stating that it had contained "errors" and "fabrications." Let's review the responses:

1. This American Life--"Daisey lied to me and to ‘This American Life’ producer Brian Reed during the fact checking we did on the story,” said Ira Glass, host and executive producer of the program." said in the statement. “That doesn’t excuse the fact that we never should’ve put this on the air. In the end, this was our mistake.”

2. Mike Daisey--Said Daisy on his blog--“I stand by my work....“ ’This American Life’ is essentially a journalistic ­- not a theatrical ­- enterprise, and as such it operates under a different set of rules and expectations,” Daisey wrote. “For this reason, I regret that I allowed ’This American Life’ to air an excerpt from my monologue. What I do is not journalism.”

3. Foxconn--“I am happy that the truth prevails, I am glad that Mike Daisey’s lies were exposed,” Louis Woo, a spokesman for Taipei- based Foxconn, said by telephone today. “But I don’t think that the reports about this have gone far enough to find out what exactly is the truth.”

4. The Public Theater--"Daisey’s work reveals 'human truths in story form,' the Public Theater said in a statement. 'Mike is an artist, not a journalist,' the theater said. 'Nevertheless, we wish he had been more precise with us and our audiences about what was and wasn’t his personal experience in the piece.'”

Assuming that Apple continues to maintain its silence on the matter, this raises an interesting question. This Kat has heard about results of surveys whereby the public continues to worship Apple products, even as it characterizes the company as "arrogant". One might view the company's failure to comment on this matter as another indication of its alleged "arrogance." Or maybe not -- perhaps it is simply the best way for the company to protect its brand under the circumstances. After all, as the Bloomberg.com report states, "Apple stock has returned 649 percent since January 2009, beating the Standard & Poor’s 500 index by a factor of almost 9, as demand for its iPhones and iPads spurs revenue growth and makes it one of the six most valuable U.S. companies of all time by market capitalization."

These kinds of results will do wonders for one's brand. Mum is the word.
Apple and Foxconn: When Saying Less Might Be Better

Reviewed by Neil Wilkof on Tuesday, March 20, 2012 Rating: 5
The IPKat licenses the use of its blog posts under a Creative Commons Attribution-Non Commercial Licence.