Darren Smyth Thursday, March 29, 2012 - insufficiency, inventive step, patent, VEGF
A fact that the IPKat omitted to mention in yesterday’s post on Teva and ors v AstraZeneca was the large number of legal teams involved.  There was one defendant and six claimants.  Two of the claimants (two Teva entities) were represented by one legal team, while the other four claimants had another legal team.  So in total there were three teams, each of a firm of solicitors, a QC (except that all the claimants shared a single QC), and a further barrister.
On the same day was issued a decision of Mr Justice Floyd.  This case had two claimants and one defendant, and again three legal teams, each of a firm of solicitors, a QC, and a further barrister.  The London contentious legal profession has been heavily occupied with these two cases.
Floyd J’s decision was in Regeneron Pharmaceuticals Inc, Bayer Pharma AG v Genentech Inc.  The case started as an action for a declaration of invalidity of Genentech’s patent EP1238986, and declaration of non-infringement by a product that Regeneron is planning to market called VEGF Trap Eye.  That is why Regeneron and Bayer are the claimants, while the patentee is the defendant.
The decision itself is a moderately whopping 222 paragraphs (56 pages in the formal version; 23 in the html version that the IPKat read, for some reason ending up in microscopic font size), but ends with the pleasingly brief and fully informative paragraph:

So what was it all about?  The IPKat will attempt a précis.  The judgement is referred to by paragraph number.
The patent had the following main claim [28]:

Upon seeing this claim, wherein both the medical indication to be treated and the proposed treatment are defined in broad functional terms (and having sneaked a glance at the final result) the IPKat was intrigued as to how Genentech possibly managed to navigate between the Scylla and Charybdis of inventive step and sufficiency.  Somehow they did.
Background
Blood vessels comprise two main cellular components: the endothelium and the mural cells. The endothelium is a continuous, cylindrical layer of cells, called endothelial cells, which interface with blood in the vessel. [4]
Vasculogenesis is the formation of blood vessels from scratch. Vasculogenesis primarily occurs during embryonic development of the circulatory system. Angiogenesis, or neo-vascularisation, on the other hand is the process of new blood vessel growth by endothelial cell proliferation and outgrowth from pre-existing vessels. In a number of normal physiological processes, such as wound healing and during the female reproductive cycle, new blood vessels are required to supply oxygen and nutrients to developing tissues. In these processes new blood vessels are produced by angiogenesis from the existing vasculature. Excessive angiogenesis, on the other hand, is a contributing factor to the pathology of a number of diseases, including cancer. In cancer, tumour cells cause new blood vessels to be produced by angiogenesis in order to supply nutrients and oxygen to the tumour, enabling it to survive and grow. These new blood vessels also enable tumour cells to escape into the bloodstream and spread to other areas of the body in a process known as metastasis. In diseases such as diabetic retinopathy and neovascular age-related macular degeneration, new blood vessels directly disrupt or interfere with the structure or normal function of other tissues. [5] 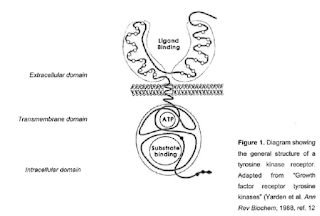 A large number of angiogenic growth factors had been shown to have activity in one or more assays by the filing date of the patent. These included: FGF, VEGF, PD-ECGF, EGF, TGF-ß, TNF-α, angiogenin and angiotropin. [61]
So, VEGF  was not new, but was only one of a number of known angiogenic growth factors.
Patentability [107-151]
The pleaded closest prior art was a 1992 paper by the inventors of the patent and co-workers entitled "The vascular endothelial growth factor proteins: identification of biologically relevant regions by neutralizing monoclonal antibodies" published in Growth Factors, 1992; 7(1): 53-64 ("Kim 1992"). [101] This disclosed an antibody to VEGF (i.e. satisfying the definition of (a) in the claim) which “may have therapeutic potential” (so not specifically indicating any particular medical use).
The inventive concept is the use of one of the specified VEGF antagonists in the treatment of a non-neoplastic disease characterised by undesired excessive neovascularisation. [134]
Floyd J accepted that, at the filing date, it was not known which, if any, of the many angiogenic growth factors represented a suitable target to achieve a therapeutic effect against pathological conditions involving neovascularisation. So it was not known that VEGF was a suitable target. Therefore, he found the claims to be inventive (as well as novel).  Accolades in the literature were held to support this finding [146-149].
Sufficiency [152 onwards]
This is a huge section of the judgement. All varieties of insufficiency were considered – classical insufficiency, insufficiency by ambiguity, and “Biogen” insufficiency.
Notably, in respect of “Biogen” insufficiency, i.e. insufficiency by excessive claim breadth,  Floyd J held as follows:

I consider that the patent discloses a principle of general application within the meaning of the authorities insofar as it claims anti-VEGF antagonism as a treatment for all non-neoplastic diseases. [189]

Therefore, he considered that the invention fell within the class that, under Biogen, is entitled to be claimed broadly without thereby being insufficient.
In respect of classical insufficiency and considering specific diseases and disorders, Floyd J found that it was not proved by the claimants that there were medical conditions falling within the scope of the claim definition that were not treatable by the claimed antibodies or receptors.  He further held that it was no barrier to sufficiency that developing a suitable treatment might take years, nor that it might involve invention – he accepted that VEGF Trap Eye was inventive.
Floyd J also rejected the submission that there was insufficiency by ambiguity, in that there was difficulty in determining what was a disease or disorder characterised by undesirable excessive neo-vascularisation. He considered that in the end the evidence did not support this. [220]
Accordingly, Floyd J rejected all of the insufficiency attacks.
Infringement [89-94]

The product VEGF Trap Eye is a treatment for age-related macular degeneration of the eye.  Its active ingredient is “a recombinant chimeric homodimer, each monomer comprising:
the immunoglobulin-like domain 2 of the VEGF-R1 receptor; and
the immunoglobulin-like domain 3 of the VEGF-R2 receptor; fused to
the constant region (Fc) of human immunoglobulin G1.” [90]
Put more simply, the product is part of a receptor for VEGF.
Floyd J held that this was an infringement under (c) of the claim, even though it is not the complete VEGF receptor.
The judgement is clear and the reasoning well explained.  The IPKat expects that there will be an appeal, and looks forward to round 2.  He is also left with the nagging feeling that, comprehensive as the judgement is, something has been left out.  He thinks it might be a detailed analysis of whether the claimed monopoly is justified by the contribution to the art, which he suspects should be part of the final sanity check of such a considerable judgement.
VEGF Trap Eye Trapped by Genentech Patent - Regeneron & Bayer unsuccessful

Reviewed by Darren Smyth on Thursday, March 29, 2012 Rating: 5
The IPKat licenses the use of its blog posts under a Creative Commons Attribution-Non Commercial Licence.