Jeremy Wednesday, February 26, 2014 - genetically modified products, Jeremy Phillips, limitations on research, Roundup
A reader of this weblog, whose identity is known to this blogger but who asks to be referred to, modestly, as "Pedestrian", has some big questions to ask, questions that may produce quite different answers as between different countries.  There's more here than this Kat can confidently answer, so he is happy to put the questions before his readers. Pedestrian writes as follows: 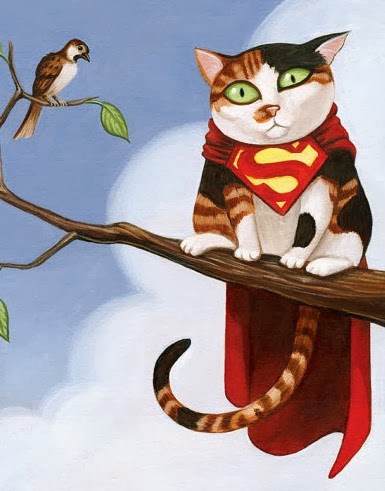 Over the years there have been a number of IPKat posts about genetically modified (GM) crops and patent laws (for example here). And there are a lot of other, often confusing, articles on this subject on the web generally. That's why I'm hoping you can help to clarify a few questions.

Right: genetically modified -- but will he fly?*

Given that there is good evidence that unintentional cross-pollination between non-GM crops and GM crops of the same species can happen (see New Scientist, here)  Can you or your readers answer the following questions?

The ability to kill weeds without killing the crop is the advantage of Roundup-resistant crops. And the obvious proof that the farmer knew that the crop that he had planted had the gene for resistance to Roundup is that the farmer subsequently sprayed Roundup on that crop.

The advantage of other GM crops, such as those containing the gene for the bacillus thuringiensis toxin, is that farmers do not need to use much in the way of pesticide spays on their crops: the plants have a built-in bug killer. In the case of these crops, proof that a farmer knew that his saved seeds contained unlicensed 'bug killer' genes should be trickier to establish.

Have there been any prosecutions of farmers regarding the planting of cross-pollinated second generation crops that need less or no pesticide?

In 2009 Scientific American famously reported that the sales contracts for GM seeds prohibited sale of these seeds for independent scientific research. Since then, the GM crop companies have significantly liberalized their policies regarding independent research into the 'behaviour' of GM crops in the environment.

However, is it still technically possible for a holder of a GM crop patent to use that patent to filter who can, or cannot, do research into that GM crop's behaviour, in the environment?

Come on readers, let's be hearing from you!

* "7 SUPERHERO CATS FIGHTING FOR JUSTICE AND CATNIP FOR ALL", by Kellie Foxx-Gonzalez, The Mary Sue, here
Patents and GM crops: a reader asks ...

Reviewed by Jeremy on Wednesday, February 26, 2014 Rating: 5
The IPKat licenses the use of its blog posts under a Creative Commons Attribution-Non Commercial Licence.