DOBBIN strikes again, this time with a slow-settling MAGNET dispute

Jeremy Monday, July 14, 2014 - Community trade mark opposition, Comparison of marks, Jeremy Phillips
The Department of Belatedly Blogged Interesting Niceties (DOBBIN, which made its debut here) has been belatedly active again. This time the spotlight shines on Cases T 604/11 and T 292/12 Mega Brands International v OHIM, Diset SA, a General Court of the European Union (Second Chamber) ruling that goes all the way back to 4 February 2014.

In January 2008 and March 2010 respectively, Mega Brands applied to register as Community trade marks for ‘toys and playthings, in particular multi-part construction toys, its parts, its accessories and its fittings’ in Class 28 (i) a figurative sign containing the word MAGNEXT, represented on the right, for and (ii) the word sign MAGNEXT.

In September 2008 and June 2010, Diset filed notices of opposition, basing its opposition on its earlier Spanish word mark MAGNET 4, registered in December 2003 for ‘games, toys, gymnastic and sports articles not included in other classes; decorations for Christmas trees’, also in Class 28 [at this point you might be thinking: "first MATRATZEN, then DOGHNUTS: is this another of those annoying cases in which a Spanish trade mark registration for a generic term in another European language causes trouble?" But you'd be wrong ...]. According to Diset, on account of the similarity of the Mega Brans' signs to its MAGNET 4 mark and the identity or similarity of the respective goods, there was a likelihood of confusion of the relevant consumers. Diset also relied on a figurative mark containing the words "Diset Magnetics" (shown below), but that doesn't come into the story till later.

Mega Brands then appealed to the General Court, which joined the two appeals and then steered a midway course between the two Board of Appeal decisions. 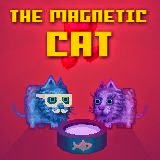 The General Court then looked at the linguistic element of the appeal: the existence in the Spanish language of the adjective ‘magnético’, commonly used by the relevant Spanish public to designate an article with magnetic properties, had the consequence that that public would associate MAGNET 4 with objects having such properties. There was thus no conceptual similarity between either of Mega Brands’ marks and MAGNET 4 since the word ‘magnext’, which did not exist in Spanish and was not otherwise connected to any current concept, would be perceived as being fanciful. Nor did the mark MAGNET 4 contain any element that might be associated with the English word ‘next’. It followed that, conceptually, the conflicting marks were different and that, therefore, MAGNET 4 had only a very weak degree of similarity to the figurative mark applied for and a medium degree of similarity with MAGNEXT.

The greater the earlier mark's distinctive character, the wider is the degree of protection accorded to it -- so how great was the distinctive character of MAGNET 4? Not very, it seemed: on the evidence, MAGNET 4 sent a message that might be connected, in the mind of the relevant public, to the characteristics of the products for which they were registered and which were identical to those covered by the figurative and word marks applied for. Accordingly, and contrary to the finding of the Board of Appeal, its distinctive character was not medium but weak.

In the context of a global assessment of the likelihood of confusion, taking account of the very slight degree of similarity between Mega Brands’ figurative mark and the weak distinctive character of MAGNET 4, the Board of Appeal was wrong to find a likelihood of confusion. Even if the products covered by the marks in question were partly identical, the overall impression given to the relevant consumer was sufficiently different to avoid such a risk. However, since the similarity between MAGNEXT and MAGNET 4 was greater, the finding of the Board of Appeal on the likelihood of confusion between those marks must be upheld.

What about "Diset Magnetics", then?

Article 65(3) of Regulation 207/2009 lets the General Court review the legality of Board of Appeal decisions -- but this is generally only the case where the case has reached a stage permitting appropriate final judgment. But that wasn't the case here. Since the Board of Appeal, having found a likelihood of confusion in respect of MAGNET 4, did not examine the opposition from the perspective of “Diset Magnetics”, it thus made no assessment in that regard. The state of the proceedings did not therefore permit final judgment to be given, so that Mega Brands’ application to dismiss the opposition in respect of the application to register its figurative mark had to be dismissed.

Says the IPKat, this is another classic example of two trivial questions -- "will Spanish people who buy toys be confused between MAGNET 4 and the MAGNEXT word and figurative marks?" -- taking respectively four and six years to get as far as a partially inconclusive answer. He fails to see any objective commercial justification for the establishment and functioning of a system that takes so long. At least, if you toss a coin, both parties then have an answer that will guide them in their marketing and branding strategies. Says Merpel, the slow speed of operation of the Community trade mark system is still no excuse for the slow writing-up of decisions of the General Court ...

Reviewed by Jeremy on Monday, July 14, 2014 Rating: 5
The IPKat licenses the use of its blog posts under a Creative Commons Attribution-Non Commercial Licence.