Cecilia Sbrolli Sunday, June 30, 2019 - copyright directive, Copyright in the information society, Digital single market, edward elgar
If you are interested in copyright, then the book Copyright in the Information Society: a guide to national implementation of the European Directive is the book for you!

The main idea behind this project, started in 2013 with the first edition of the book, is to describe how Directive 2001/29/EC, the "Copyright Directive", has been implemented by the various national legislatures and how they have dealt with the consequences of said implementation. The added value of this publication is the in-depth contributors' insights into their respective national systems.

Since the first edition of the book, the Copyright Directive has been under the scrutiny of the Court of Justice a considerable number of times impacting on European and national law alike. Not only there have been interpretations of various provisions of the Directive coming from the Court of Justice but national parliaments in the Member States have also enacted legislation to deal with specific issues, e.g., copyright infringement. Another major change since the first edition of the book is the adoption of the initial part of the Digital Single Market copyright package, however, as these norms are not yet implemented into national legislation, this edition of the book does not treat the topic.

‘The second edition of this important and thorough book has grown by more than 25 percent to include updates of the relevant international and EU norms and developments, and in particular the interpretation by the Court of Justice of the EU, as well as national law reports by 28 authors from the respective member states. Containing in-depth and critical analyses, excellently written, this book offers a refreshing and rewarding experience!’
– Silke von Lewinski, Max Planck Institute for Innovation and Competition, Germany 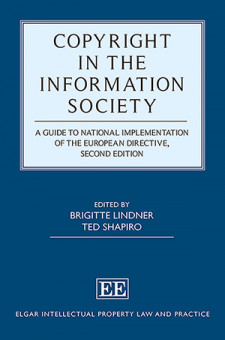 The book is divided into three parts: Part I analyses the background, benefits and challenges of the WIPO treaties (WIPO Copyright Treaty and the WIPO Performances and Phonograms Treaty); Part II focusses on the Copyright Directive, notably on rights, limitations and exceptions, technological measures, sanctions and remedies provided in the Directive; and Part III, the core of the book, provides a country by country analysis of the implementation of the Directive in all the Member States. Academics, judges and practitioners  provided their contribution for this part, giving an insight into the particularities of their national systems, ranging from exceptions to procedures and remedies, and on the main challenges faced.

This book is undoubtedly an essential tool for students, in-house counsel, advisers, litigators and IP scholars alike, offering an extensive basis of content presented with an holistic approach and an exhaustive list of relevant case law (of European and Member States Court) essential for practice, study and research.

What the editor says:

This substantially revised second edition evaluates the Directive on Copyright in the Information Society and its interpretation by the European Court of Justice in the light of its implementation and application in the EU’s 28 member states. Following the initial implementation of the Directive, many member states have enacted further legislation to supplement or refine their earlier implementation: this edition will take these important developments into account.

Reviewed by Cecilia Sbrolli on Sunday, June 30, 2019 Rating: 5
The IPKat licenses the use of its blog posts under a Creative Commons Attribution-Non Commercial Licence.